Oishinbo a la carte, Volume 5 – Vegetables by Tetsuya Kariya and Akira Hanasaki.
My rating: 3 of 5 stars.

Five volumes in and I guess we turn to the topic that kids aren’t excited about: veggies. Thankfully for me, broad beans are given a swerve, but there’s some good reps given to eggplant, a purple fiend I’m only sort of friends with. 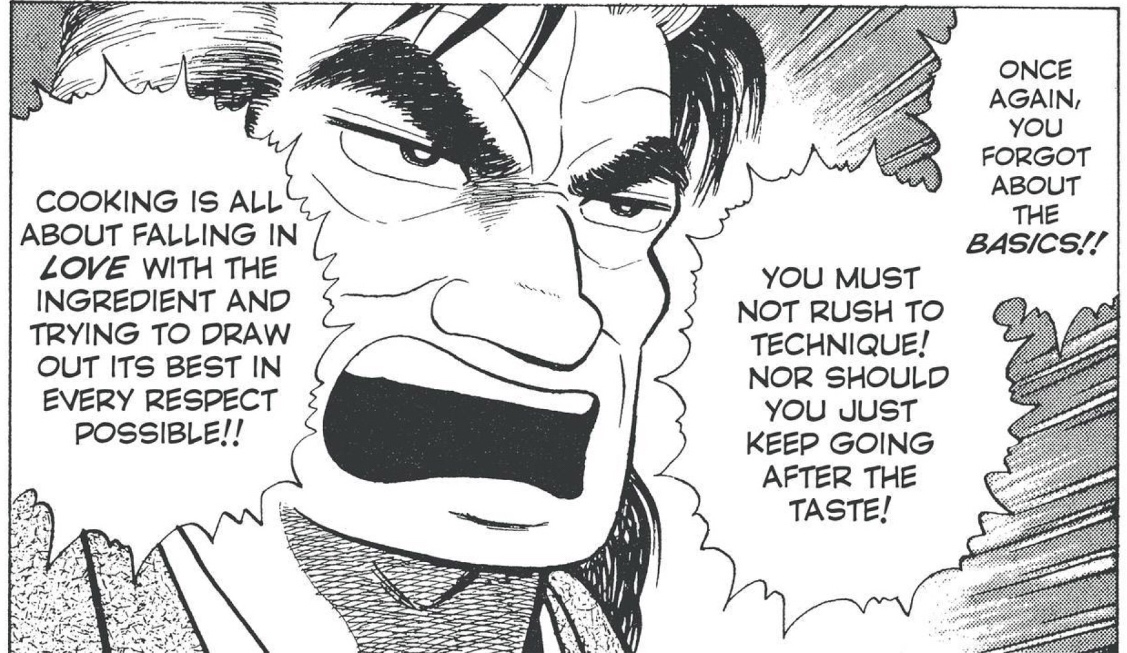 I AM SHOUTING BECAUSE I AM IN LOVE WITH THIS TURNIP YOU SIMPLETON.

What I’m saying is that I guess it seems hard for readers – and for me – to be as wound-up excited to read a volume about greens when we’ve formerly had some great, in-depth knowledge shot at us from the Oishinbo food cannon. I was prepared for this to be a bit eh.

Pretty sure that guy on the right is related to that enthusiastic sommelier from a previous volume.

The reason this collection of stories works – or holds the interest, at least – is because it once more features some extended stories. True, they might only stretch for a couple of chapters, but there’s more to this assemblage than one-shots. This makes sense, because though technique comes into the stories – you’ll never look at turnips the same way again, really – there’s really not a lot of high-level instruction displayed. Rather, when it comes to vegetables, Kariya seems to focus predominantly on one message: that pesticides are bad, man. 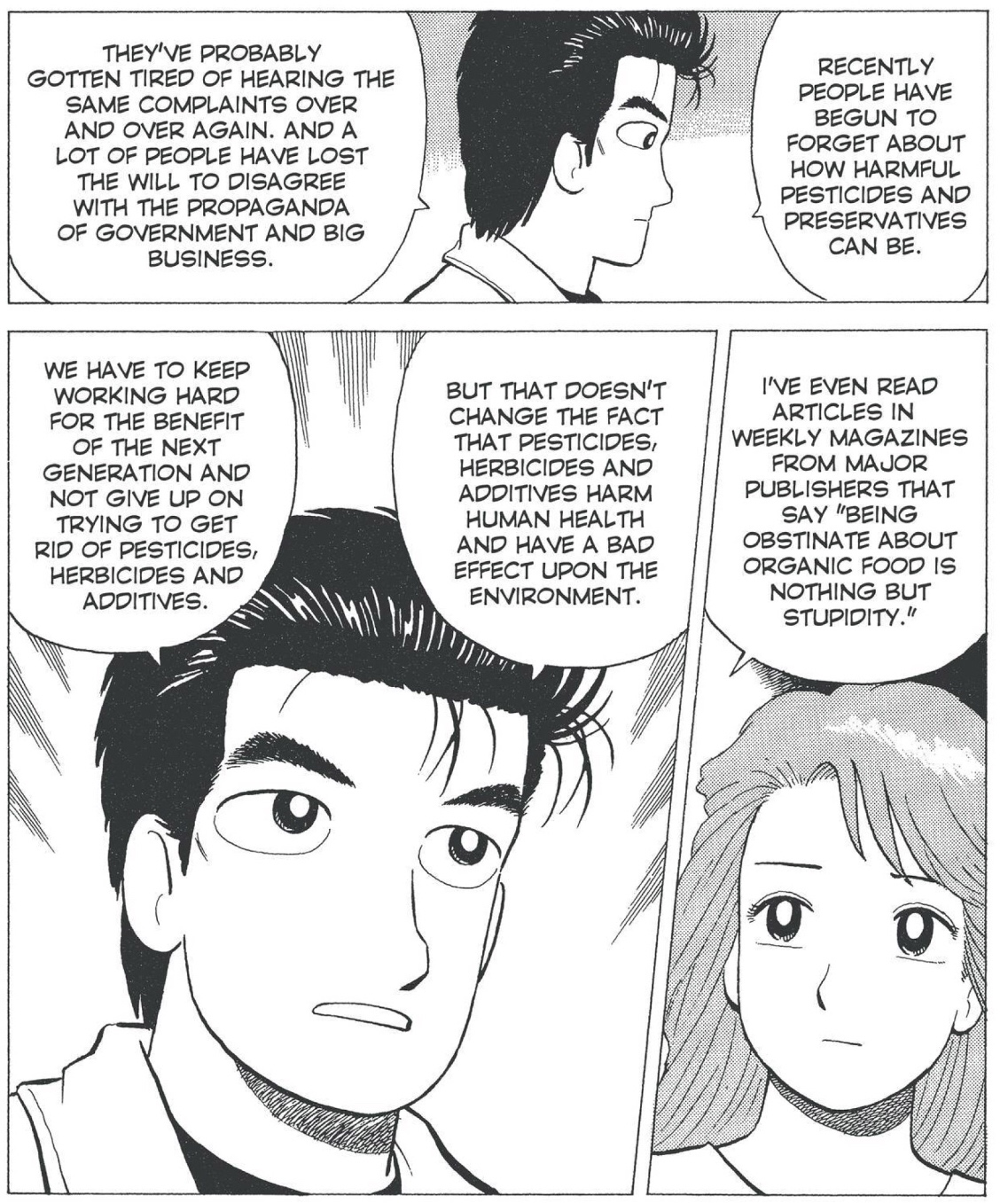 He is surrounded by the LIGHT OF REASON here, y’see.

I can’t tell when in the strip’s run these stories come from, but it’s probably reasonable to assume that they’re from a time when pesticide awareness wasn’t particularly high. Hence, the food nerds spend a lot of time throughout fighting the assumption that not using pesticides is akin to Luddism, or is a vanity designed to send farmers and suppliers broke.

There’s a lot of talk about the role of societal bodies in the forming of acceptable behaviour regarding pesticides, which is neatly reflected in some of the stories chosen here: stories that look at how you’re supposed to act, and how you choose to act. At how your behaviour, influenced by others, influences those close to you. There’s examination of poor business dealings, of fractured families and of school bullying, all of them seemingly unrelated to veggies – but all underscored by the same consideration of what’s acceptable to the masses versus what’s best for you. 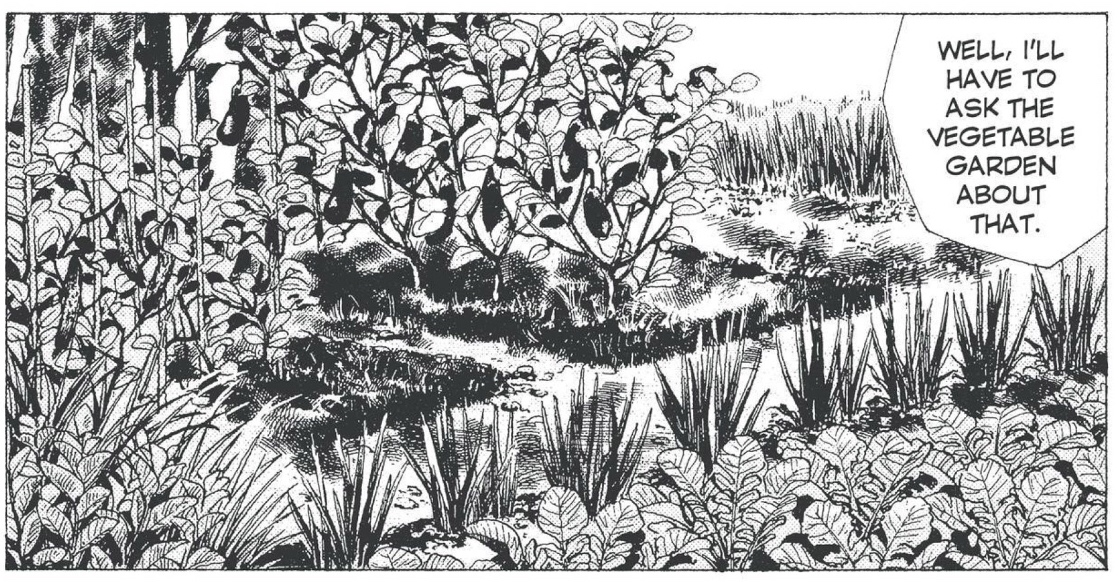 Then I have to stare at my hand for a couple of hours. Because we’re all… particles.

Bitchiness between Kaibara and Yamaoka continues, of course, with glaring and clenched fists aplenty. The relationship between father and son is not going to be improving any time soon, as expected, but it does allow for further high-dudgeon fireworks.

MY SON THE LOSER.

True, this volume feels like a holding pattern. But I like the way it treats veg with a respect they’re not often afforded (by myself included). It’s a collection of stories that show that hard-headedness can be shed for a better future – it’s just a shame that the two main dudes in the long-running story are unlikely to do so any time soon.