Oishinbo a la carte, Volume 6 – The Joy of Rice by Tetsuya Kariya and Akira Hanasaki.
My rating: 3 of 5 stars.

We’re getting to the pointy end now. This is the penultimate volume of Viz’s collections of extracts from Oishinbo, and so it’s time for something subtle. Something both representative of Japan and its culture, and of hearth and home. Something to get excited about. 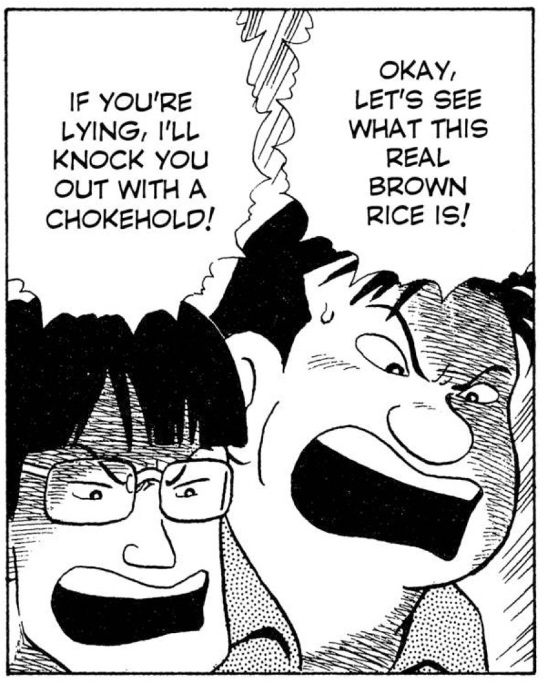 Yeah, you heard me. And that’s perhaps why this volume received only three stars from me: it’s interesting enough, and certainly contains some specifically scientific discussion that harks back to the parasite chat of the fish volume. But it’s not a world-beater. 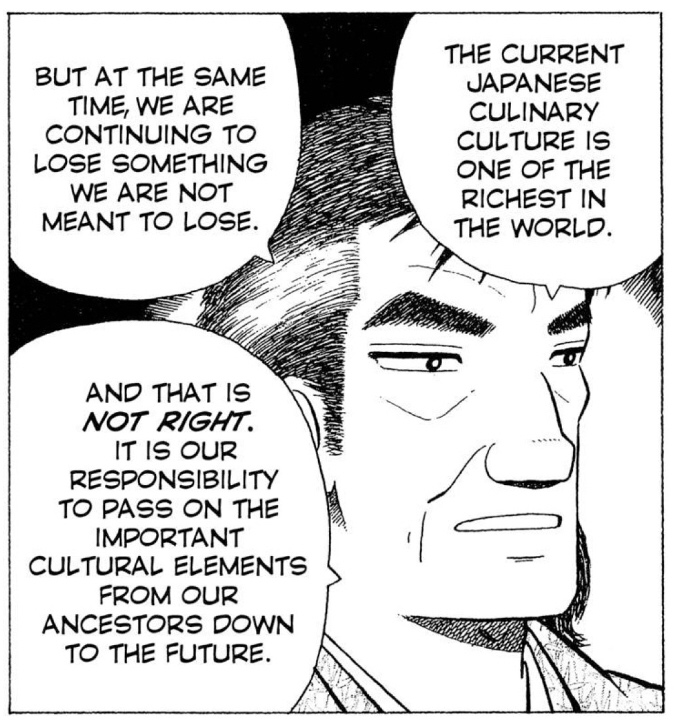 Did I end up thinking differently about rice? Yes, I did. Did I learn some things about rice I didn’t know? Absolutely. It just didn’t seem to spark as much as other volumes, though, and I suspect that it’s because Kariya’s stories here are assembled in a way that highlights the importance of rice – and traditional styles of eating – to the Japanese identity. There’s that sense of the Yamato spirit – Yamaoka digs in to government personalities about the irresponsibility of diminishing the importance of the domestic rice market in a way that’s almost comical in its intensity. 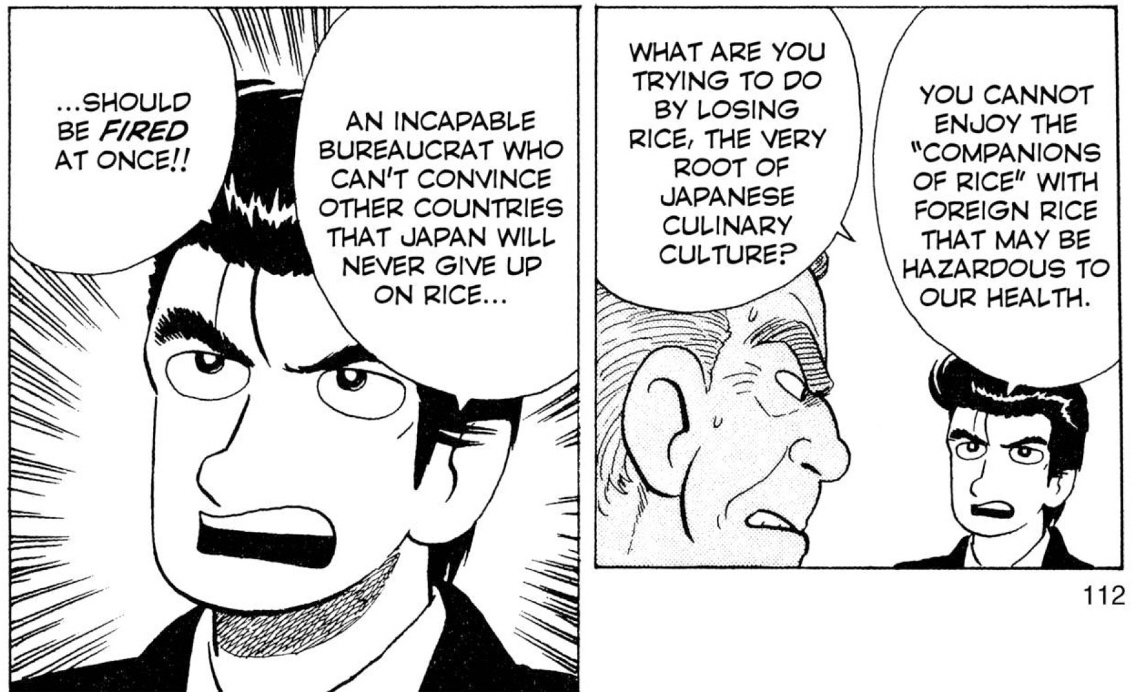 I MAY ONLY BE A SLACK-ARSE JOURNALIST BUT I TELL YOU YOU’RE FUCKING RICE FOR THE REST OF US, MINISTER.

But then there’s this. 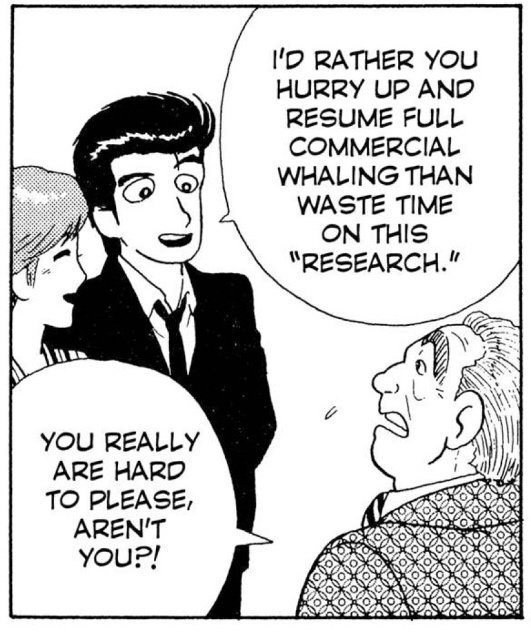 Er, yeah. I guess that’s one of those things that doesn’t translate too well to readers outside of Japan, even if Yamaoka is calling the “research” cover out. Still, it was a bit odd for me to see this louche food lover and defender of the importance to let nature take its course calling for the whaling industry to get a fuckin’ move on. 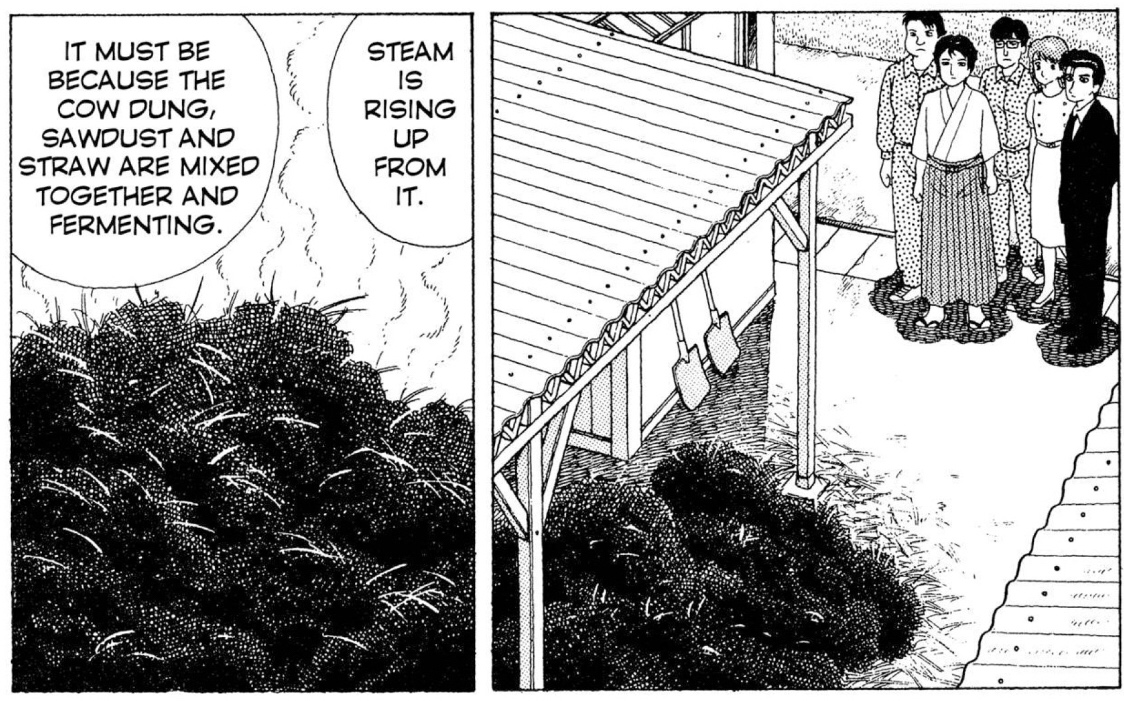 I hadn’t expected lovingly-rendered dung in a food comic, but here we are.

Yamaoka’s dickishness in general seemed to be more in the foreground in this volume, which was a bit annoying, given that he’d previously been presented as a bit cooler than he is. I suppose that’s part of the slapstick nature of Oishinbo that probably appears in a more pronounced form in the original. But it seemed jarring to me, here. 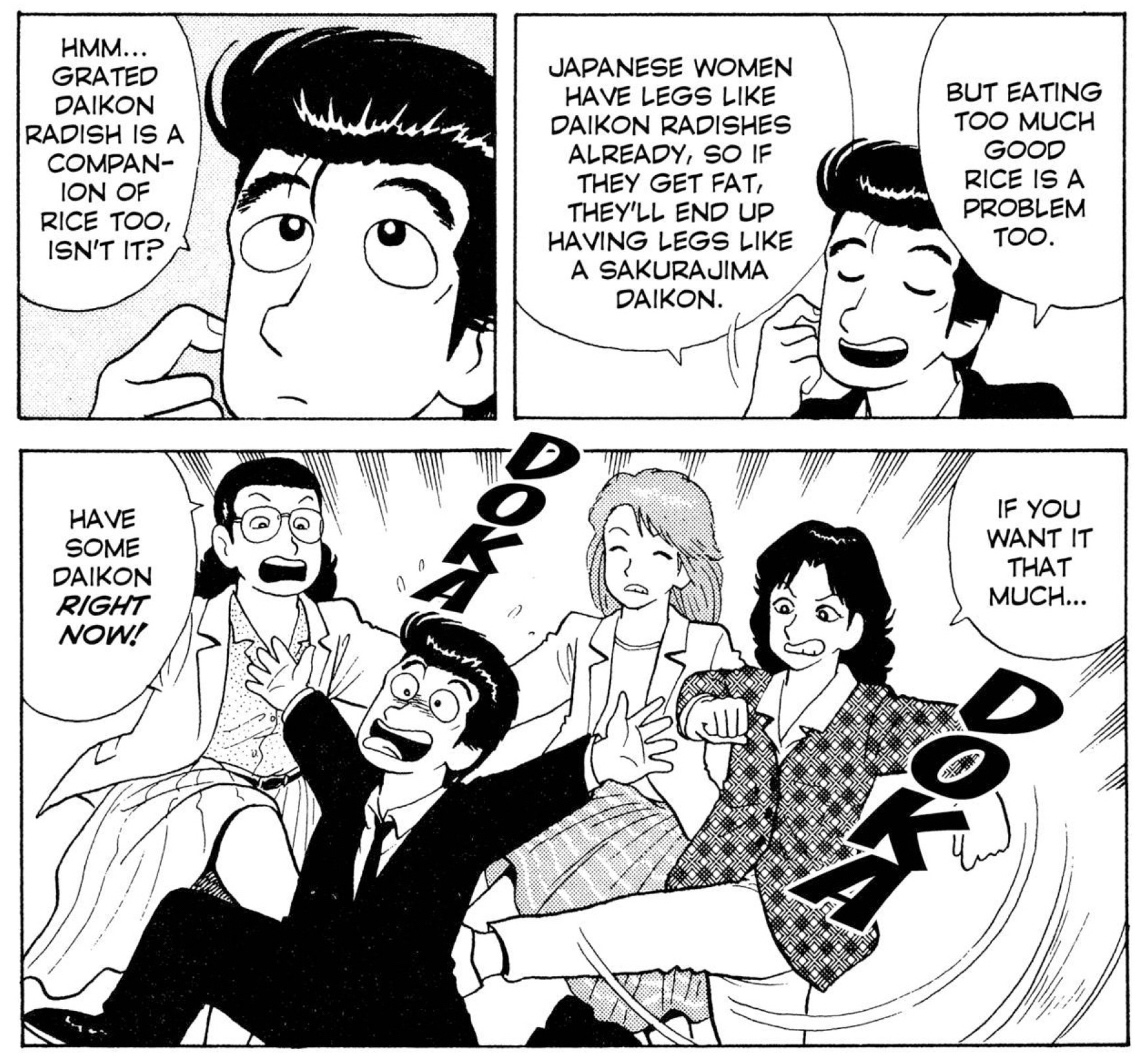 Of course, Japanese identity and whaling aren’t the only notes sounded through this collection. Again, as in the vegetables volume, Kariya riffs on the importance of sustainable farming, and on the problems caused by pesticides to the food chain. It’s good stuff to keep in the foreground for real life purposes, but given that we had a hefty dose of it only last volume, it seems repetitive. 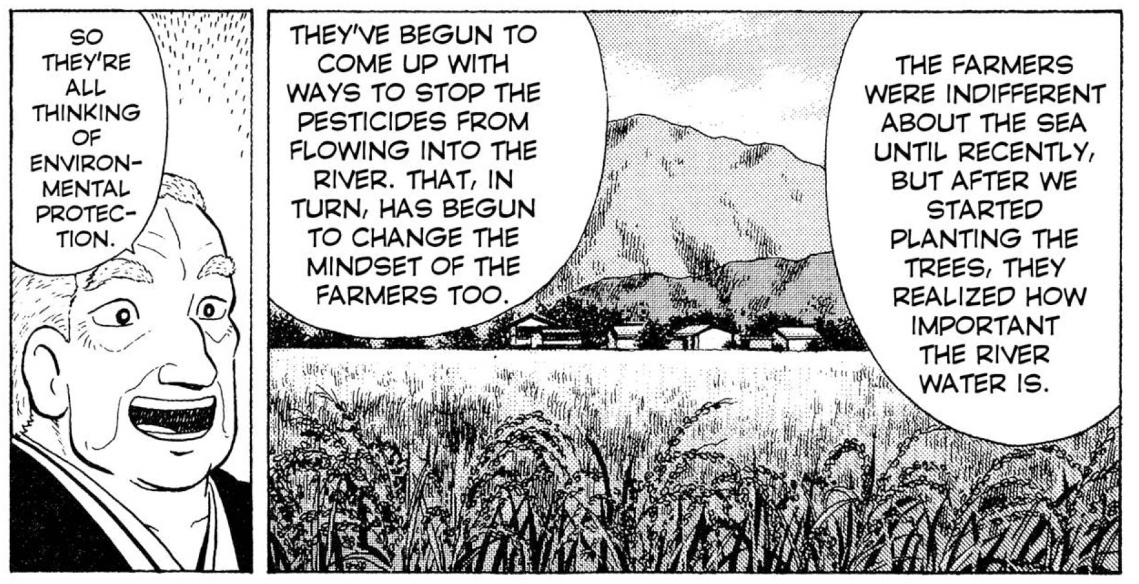 More interesting to me is the increased tenderness towards family and childhood memories that appears in this volume. Kaibara and Yamaoka have a little bit of horn-locking as expected, but there’s a lot of talk about the fact rice acts as a comfort food: that it recalls mothers. That everyone – even the homeless – have this affinity towards something as simple as the rice ball: it’s the glutinous common denominator. It’s the thing that brings feuding friends together, the thing that can take on as many flavours, as there are people based on what you add to it. 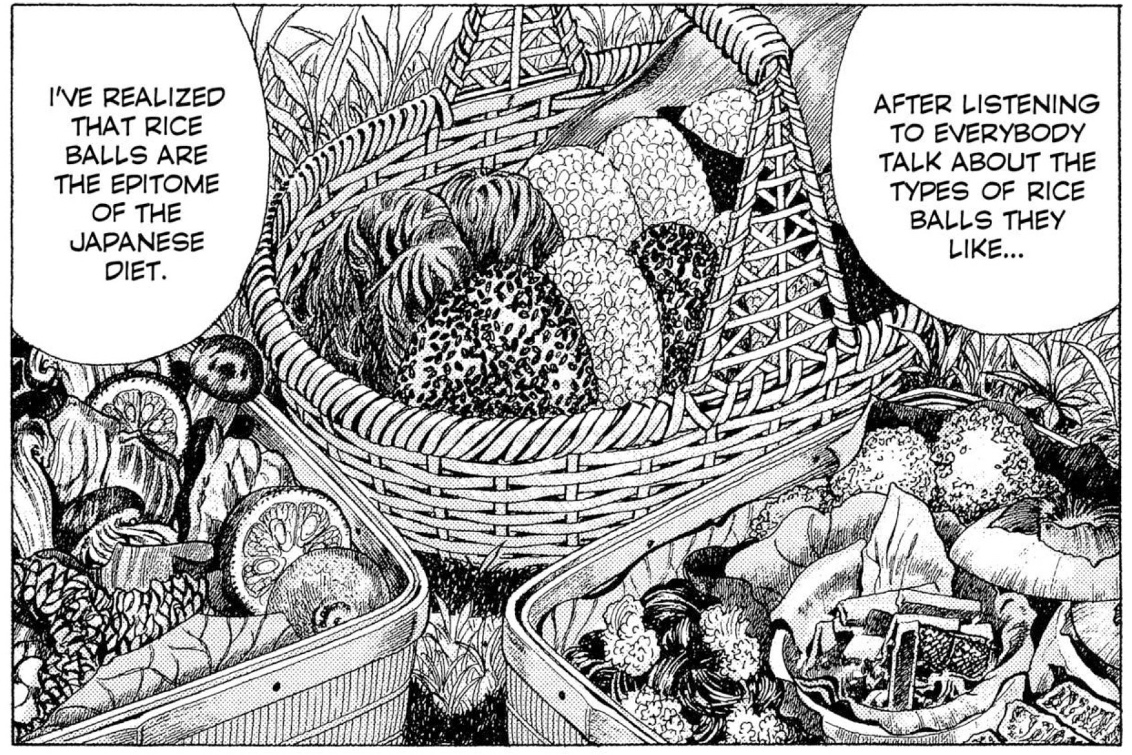 A CORNUCOPIA OF BALLS.

I won’t lie: I wanted to rustle up some rice after reading these stories. But for me, the desire to chow down stayed longer (and affected me more) than storyline specifics did. It’s a shame, but I’ve faith that the next volume will provide the satisfaction I’m looking for. Oishinbo‘s been pretty good, so a misstep once in a while is fine with me.