Into the seas and rivers, the lakes and streams! This volume of Oishinbo covers all things fishy – as long as your definition of ‘fishy’ includes life-ending parasites. 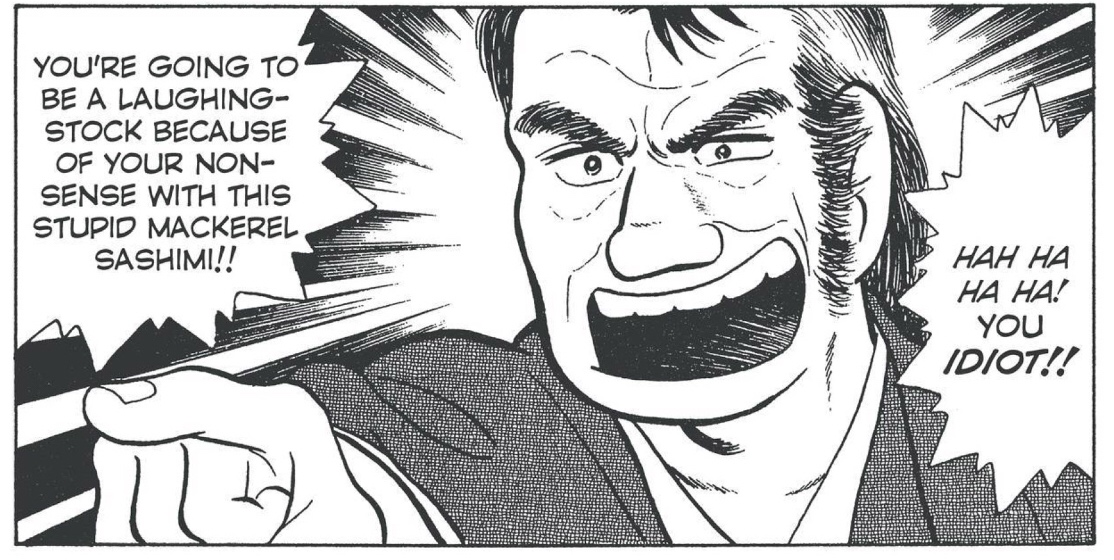 (For the purposes of this instalment, it does. Also, yuck.)

This collection of stories mashes up, as ever, different elements of the book’s run. There’s the usual competitions, but the rich and powerful come into play more, too. The concept that money can’t buy experience or discernment crops up a couple of times, and we see relationship drama between Yamaoka and Kurita for the first time. There’s more comedy than in some of the other instalments I’ve read, but the usual trope of Yamaoka acting as a saviour – for an orphanage (albeit indirectly) or a small child – appears in spades. 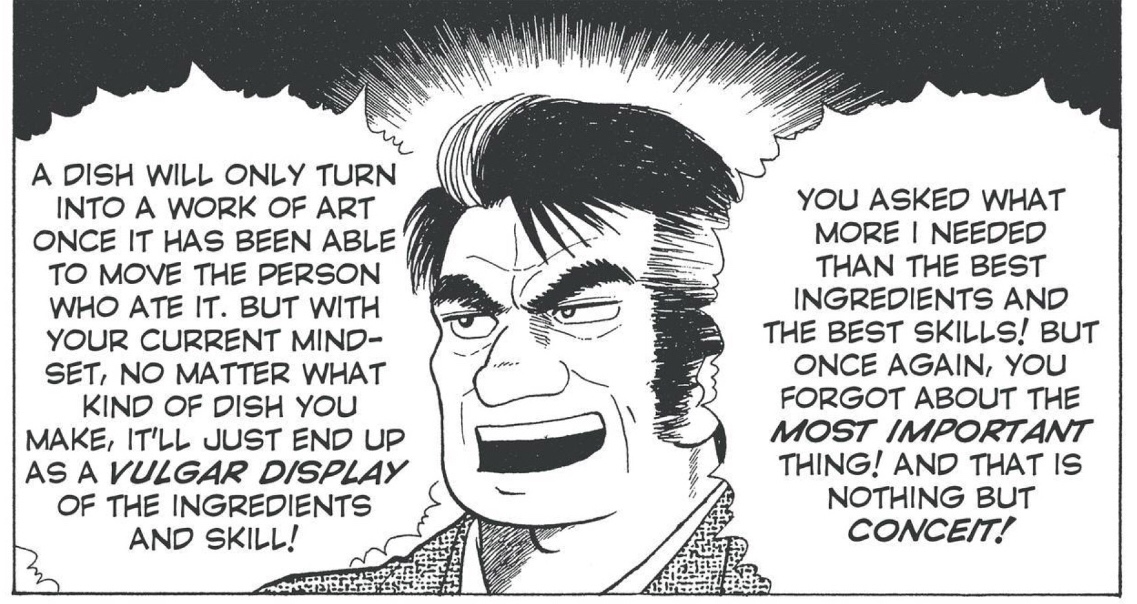 What’s interesting about the stories gathered here is that Kaibara and Yamaoka’s split is given a lot more time than in other volumes. Sure, it’s been something key to others, but here the soap opera levels are truly cranked. Kaibara is a lot more open about shitcanning his son’s abilities and decisions, even as he is exposed as a sore loser on occasion. He’s also presented as a figure who can help his son if asked, which is something not seen before. It’s interesting to me that the deepening of his character – exposure of his flaws and often-hidden tenderness included – occurs when he’s at his most SHOUTY DAD. 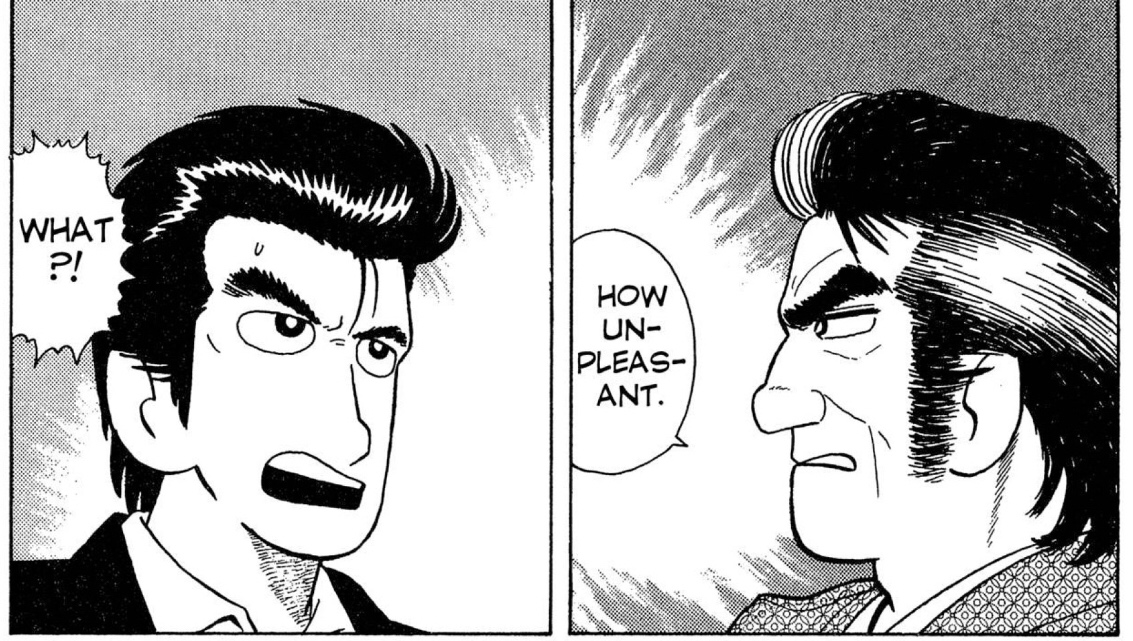 Jesus, get a room.

It’s refreshing to read some stories that balance drama and comedy with the dissemination of information. There’s a lot to process here, which could be seen as boring for people who either don’t like fish, or who are unfamiliar with the fish covered here. There’s a lot on technique, and a lot on the role that habitat and development plays on the taste of a once-scaled dinner. There’s also a fair thread of ‘food culture is fucking stupid’ running throughout, too.

Sorry everyone, gourmet food is cancelled.

But then, there’s also the parasite stuff. It’s pretty full-on, and will probably result in you looking askance at any raw fish in the future. Sure, it’s answered in a way that challenges taboos with a scientific response, but yeesh. 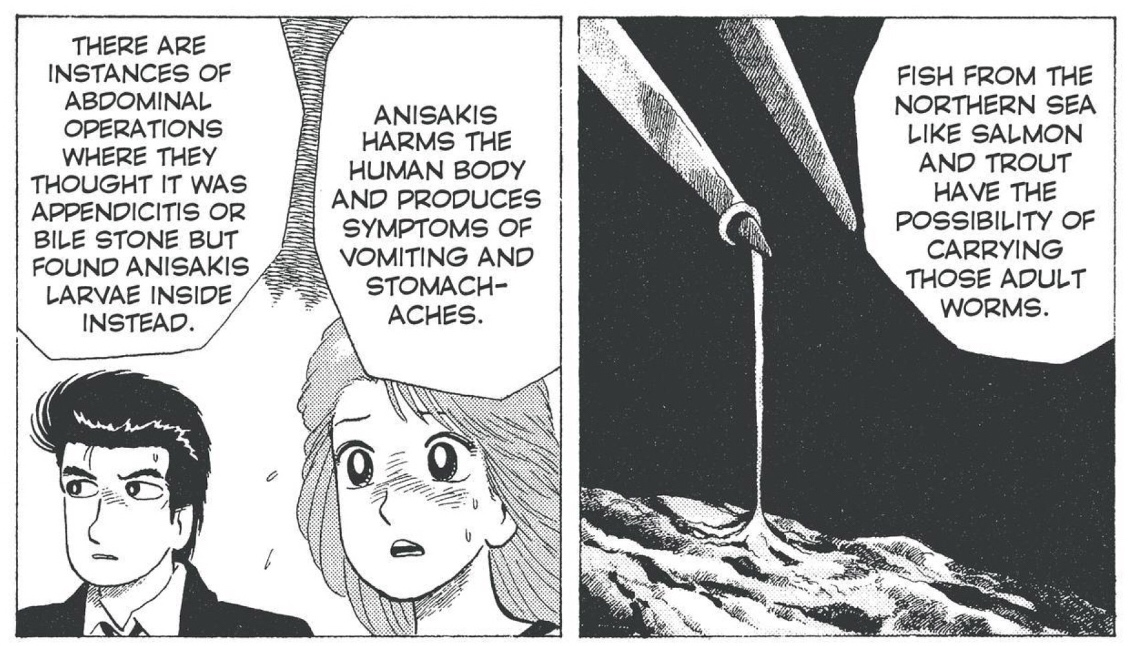 (Sidebar: if you dig this intestinal worm stuff and you’re ever in Tokyo, go to the Meguro Parasitological Museum because 1) it rules and 2) it’s gross.)

To be fair, this volume won’t be for everyone, and not just for the unexpected food visitors. The section on ikezukuri will seem strange to non-Japanese readers in a way that I’m pretty sure it wouldn’t to the original audience of the work, as the concept of serving still-alive fish is considered cruel by many. For me, though, I took it as I did the other parts of the volumes I’ve read that cover things I am not particularly familiar with: a window into something I may not condone or be interested in experiencing for myself. It’s how things are in a place I don’t come from, and it’s intriguing, even if indefensible. 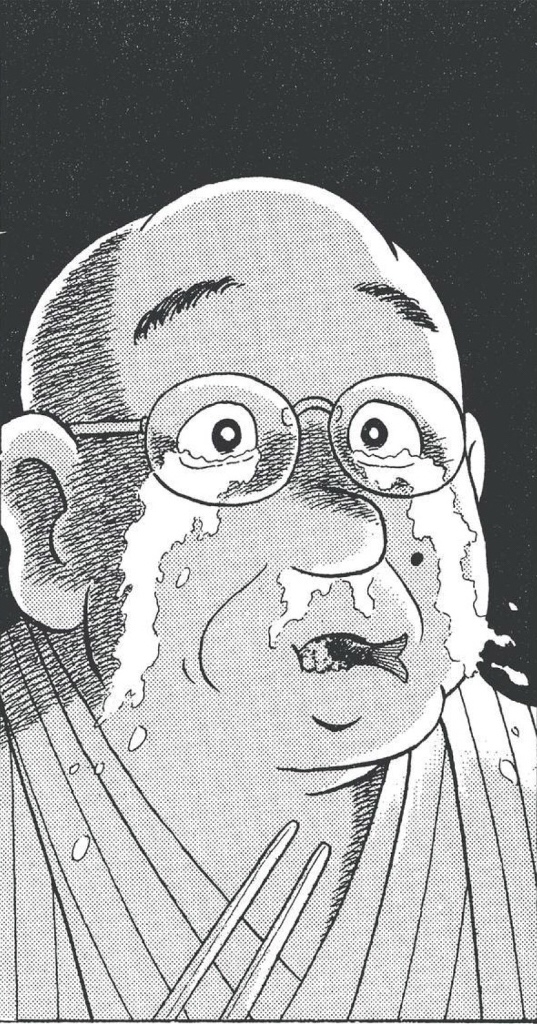 I guess he REALLY likes that fish.

This volume of the Oishinbo saga is a little uneven, but it was a lot of fun because it conveyed so much enthusiasm. I’m keen for the next course, of course. 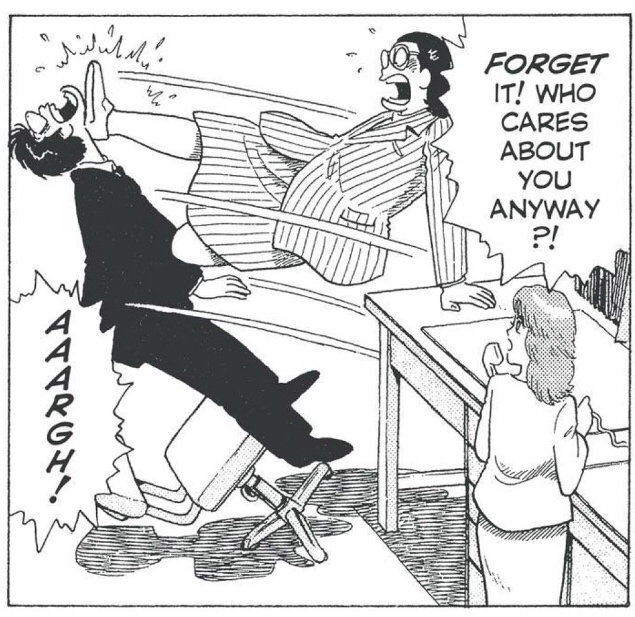