I decided I needed a palate-cleanser after the whole God of War thing, so I chose something not an entire world away: the zombie-slaying double-pack of Dead Island and Dead Island Riptide, both gussied up for the PS4.

Were they good? Oh, heavens no. I got caught on scenery, had pitiful frame rates and found some design clunky and odd. The quests were repetitive and kinda lame.

It let me put a circular saw blade on a spade and hit dead holidaymakers with it. It let me electrify a katana and cut up unholy mutations. And it let me indulge in some molitov crowd control while a buddy yelled in a terrible Aussie accent about how we should “give these fuckers a floggin’.”

So it was worthwhile, all told.

(Yes, I know there’s a third, arcade-style game in the remaster back but I wasn’t feeling it. The two major titles are the reason for being here, so they’re what I played.)

Dead Island‘s story is pretty simple. You choose one of a couple of characters (a spy, a serial douchebag, a rapper, a cop on holiday) each with different strengths. And then you wake up with a hangover to find that the world has gone to shit. For Reasons Which Become Apparent Later On, there’s a zombie infestation on Banoi, a fictional island off the coast of Papua New Guinea. Shit’s all fucked up, and you have to figure out how to survive. 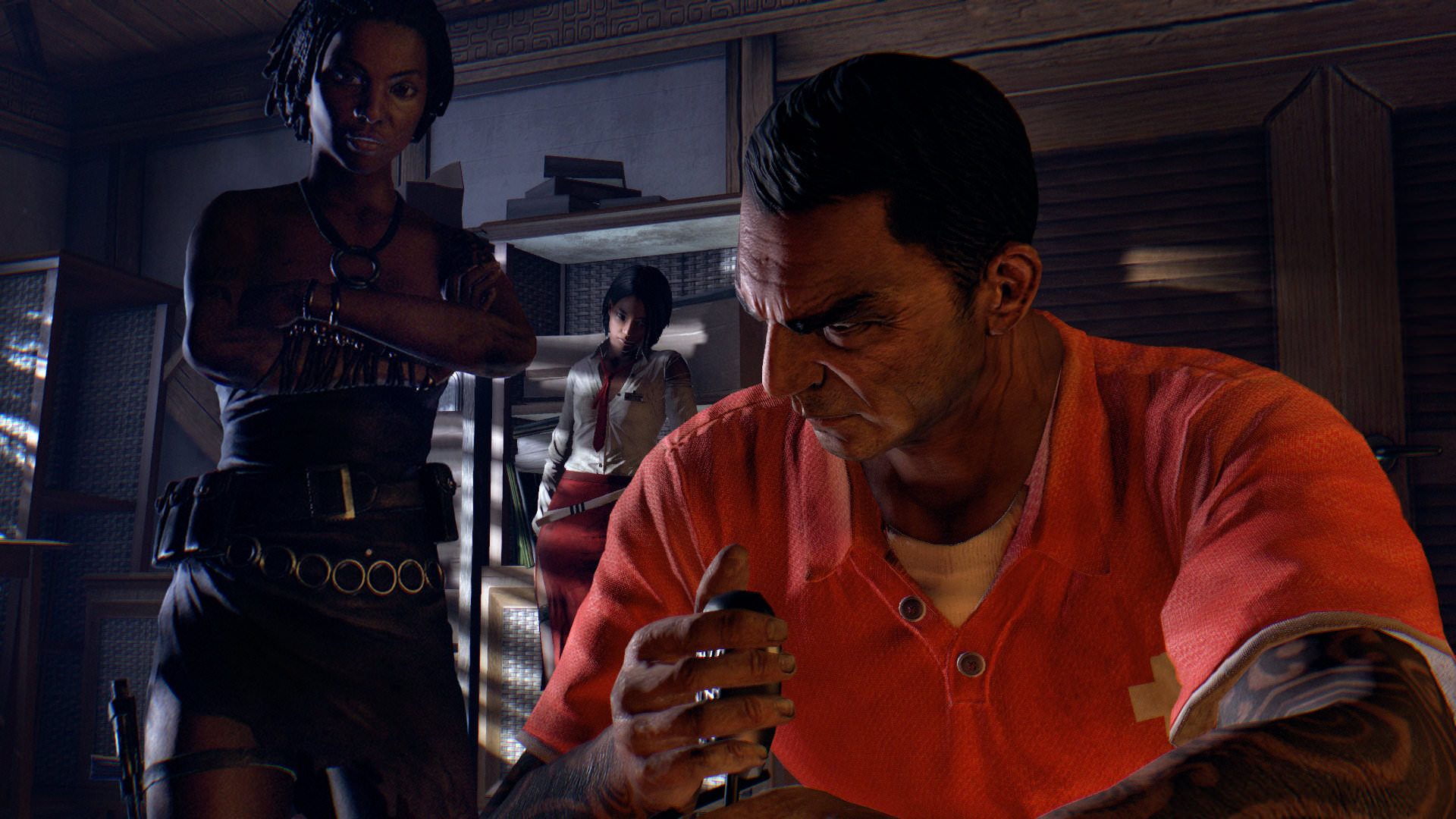 “Drama? Nah, mate, I just want three crates of tinned food thanks. Maybe you, a stranger, can get it for me?”

How you actually survive is by using makeshift weapons into odd hybrids (Poison scythes? Battery-powered katanas? OK, whatever.) and flailing the shit out of whatever comes your way. There’s guns, sure, but the game is, at heart, a melee wonderland. It’s about breaking limbs and stomping on faces before they eat yours. And at that – terrible story and OUTRAGEOUSLY bad character accents aside – the game rules. It feels remarkably satisfying to work your way through the game’s skill tree and beat back hordes of these horrible fuckers that had you hiding mere levels ago.

The game is more or less open world. There’s a whole lot of stuff – including a fancy oceanside resort, a town, a jungle, various tunnels, research stations and a crashed airliner – to explore, and a whole lot of meaningless fetch-quests to do. There’s cars you can use to run down undead hordes, and a whole lot of abandoned bags to pick through in search of cash. You can whip through the story pretty quickly if you’ve a mind to, or you can take your time and complete the backstories to receive paltry rewards and occasional saltings of narrative. 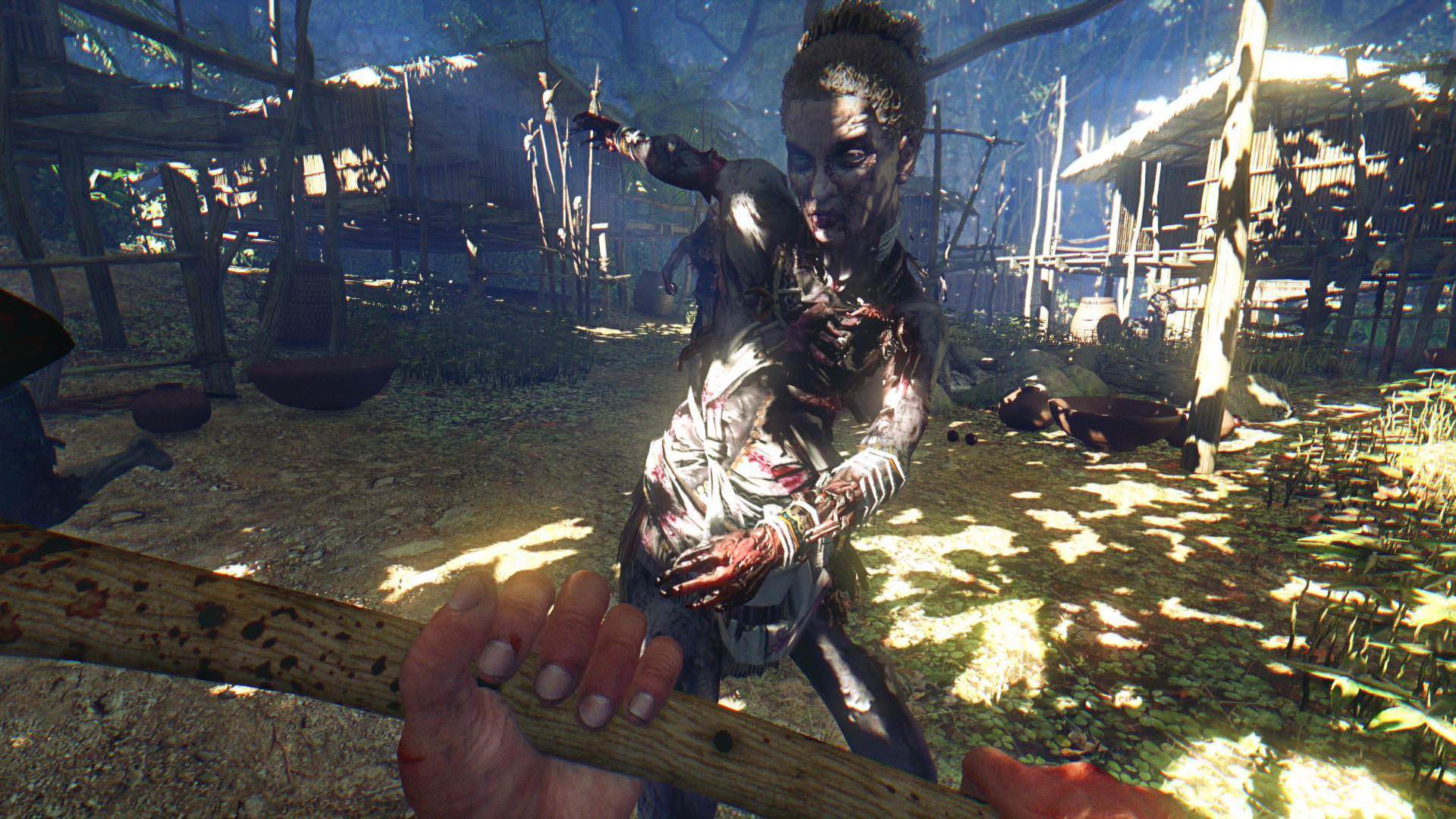 I TOLD YOU I DO NOT WANT A SOUVENIR T-SHIRT THANKS.

I was pretty impressed with the way zombies’ bodies are constructed. There’s a whole underlying skeleton which can be broken, and muscles and guts that can be damaged individually. It’s gruesome as fuck when you hack into a screaming undead motherfucker with a modified spade, but there’s something kind of breathtaking about it. This is a game where you feel yourself becoming powerful, and a match for your foes, even if you sometimes have to take advantage of their apparent inability to see around corners.

The atmosphere is pretty spot-on, though. This is a B-movie horror game, and there’s plenty of jump scare moments to be going on with. I played (mostly) late at night with headphones on, which is probably the best way to become immersed. I was vigilant for groaning corpses, for rasping indicators of what was going on – and then, of course, the torch would run out of battery. Though the weaponry is ridiculous and ultimately overpowered – probably a reward for those who stuck it out through the convoluted narrative and side-missions – the mood created is spot-on. Whatever you’re thinking about a game that sees you slaying zombies at a holiday resort is probably in here.

The strangest part of both games is that while it’s possible to play in co-op mode, your experience is more than likely going to be a first-person one. This in itself isn’t weird – but NPCs referring to you with plurals certainly is. It’s even stranger when a longer cut-scene kicks up and then, suddenly, all the other characters you hadn’t chosen to play as are seen next to you. WHERE WERE ALL YOU FUCKERS WHEN I WAS HAVING MY ARSE HANDED TO ME BY THAT STRAITJACKETED BEAST? 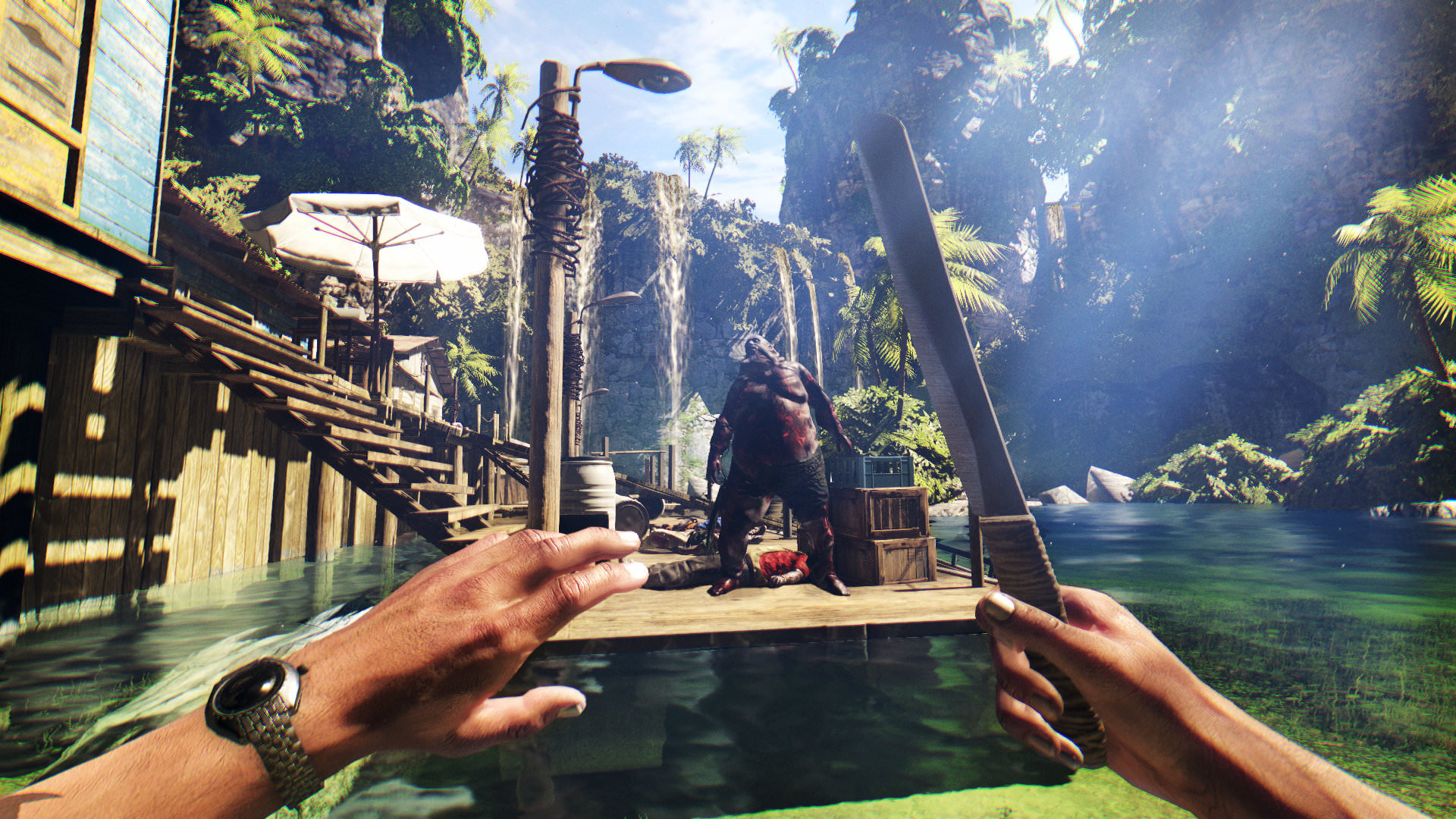 Let it all hang out, buddy.

Alas, I’ll never know. But I did enjoy Dead Island a lot: I spent about a hundred hours chasing up most of the extra missions I could do, and levelling up to level 47 or so. There wasn’t a lot more I could do when I hit the endgame level – one you can’t return from without restarting the game – and I’d been pretty much done. The story is pretty bullshit, but as with most things zombie, thinking about the story too much isn’t going to do you any favours.

So I figured it’d be worth checking out the next game. Dead Island Riptide is a sequel. And it’s remarkably phoned-in. Part of me wonders if this was how the devs justified six years of development time – by turning what otherwise might’ve been DLC into a game of its own.

See, there’s nothing really new about the game. You’re on another island that’s been Fucked By Zombies. There’s a few new enemies, a couple of different weapons you can craft, and you’ll have a head-start on the skill tree because the story takes place immediately after Dead Island – but practically everything else is the same, gameplay-wise. If anything, it seems easier. The setting is impressive, visually – there’s a curiously Italianate town to explore, as well as a sort of bayou/wetlands area with more caves and idols than you can poke a stick at – but it’s more of the same old shit. 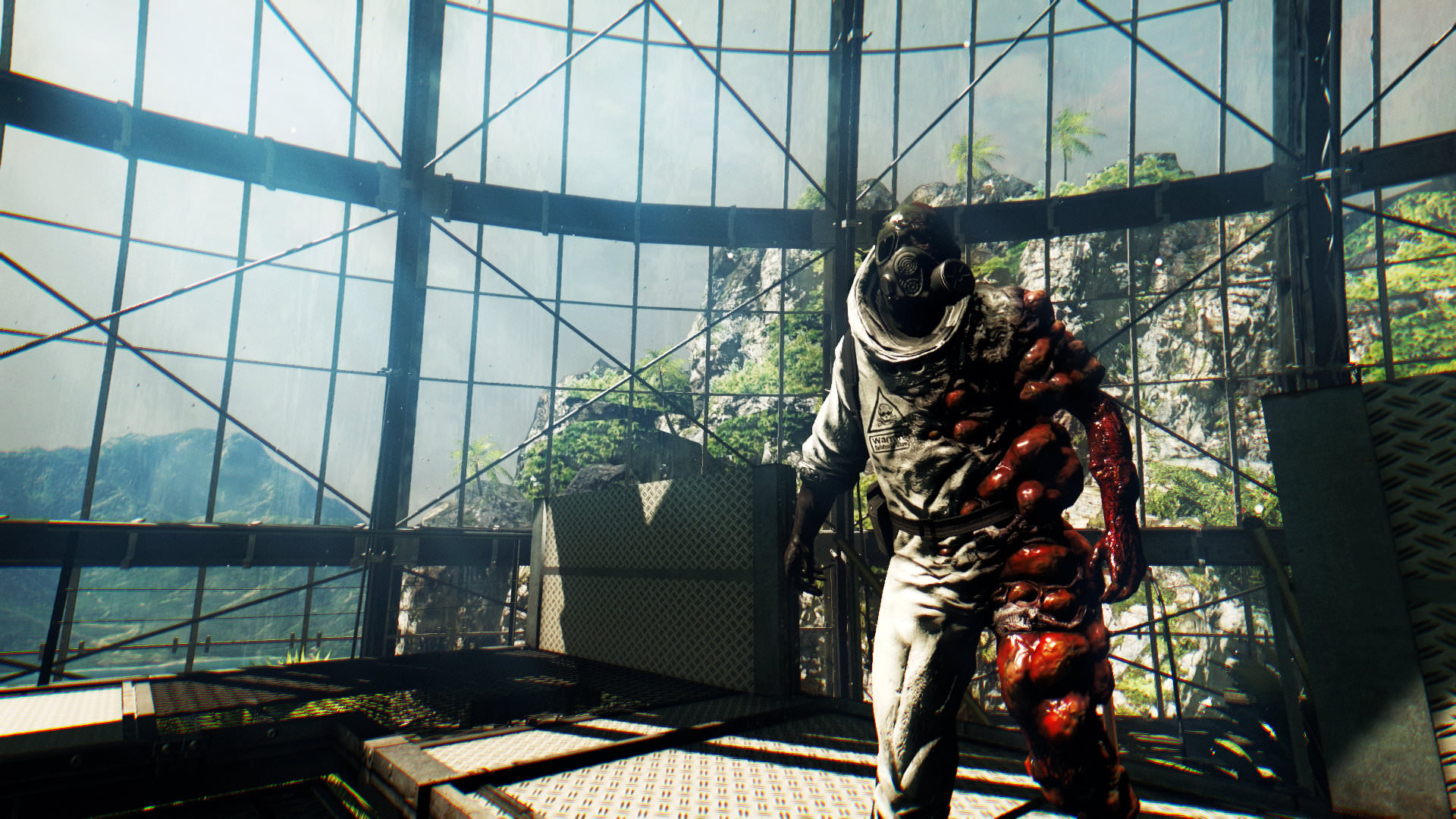 Look, undead scientists get pimples too.

I spent half as long on this game as its predecessor, and it still felt interminable. So I guess that tells you all you need to know. (Though it does also make me wonder why I figured I needed fifty hours of effort to blow through something that, if you ignore levelling and side missions, can be done in about four hours.)

Both remasters look better than I thought it would – and certainly better than the little I’d seen on PS3 – thanks to the use of the Dying Light engine. Overall, things are brighter, more detailed, and in general the lighting looks more realistic, more impressive. It’s a nice looking game – especially if you’re standing still. But even with the new engine, the game’s frame rate absolutely chugs in some areas – most notably in cutscenes. It’s disappointing, and makes the game feel a lot more cack-handed than it is.

Speaking of cack-handed, here is the theme song from the first game. I can’t help but think that this is weaponised awfulness, and absolutely intentional. It’s literally the only song that plays in Dead Island and it’s always mentioned that the rapper involved – who is the tank character, if you want to play a more bludgeon-heavy game – is a one-hit wonder. I love that even in-universe it’s an aberration.

I guess that at least as far as the first game is concerned, there’s a lot of the Deadly Premonition vibe about it: patently awful production decisions that’re overpowered by the experience of actually playing the thing. It’s as sophisticated as you’d expect a tropical open-world zombie smash-’em-up would be. Things are broken and kind of silly, but they’re enjoyable and I feel curious levels of goodwill towards the game.

The second game relies heavily on your positive disposition towards its predecessor, which is a bummer. But still, even with the disappointment I felt at what appeared to be a marking-time sequel, I found enough worthwhile that I’d recommend you give these a go if you haven’t. I mean, braining zombies never gets old, right?

There’s been a sequel in production hell for a couple of years. It’s apparently back in development now, and the idea is that it might even be released. Given that it seems to be about bringing the hordes to Los Angeles, I suspect I might even be suckered in for a third round of head-squishing silliness.