I’ve recently finished two games that seem very different, but I seem to have linked together because of their oddity, and the sense that they were both passion projects. Both are kind of broken, and were frustrating in places, but I keep thinking about how much I enjoyed them, despite these irritations.

So, here’s some loose thoughts about Singularity and Betrayer. We’ll go with the latter first because it’s the one I finished most recently.

I’d been interested in the game since it was released in 2014. The dev team had some serious goodies in their pocket, having worked on F.E.A.R. and The Operative: No-One Lives Forever, two games which I thought were fantastic. The game’s a survival horror/FPS mashup which creates an excellent mood, despite mechanical missteps.

A black, white and red nightmare, the game is set in colonial Virginia. You wash ashore near an abandoned colony – well, abandoned apart from those fuckers who’ve been turned into pillars of ash – and have to Put Things Right. Everywhere you look there’s scenes of death and murder; there’s bodies in shallow graves, and curious, fog-shrouded totems to pique your interest. There’s a girl in red who is helpful… or is she? The game is very clear about giving you zero ideas of where to go or what to do, so you’re thrust into the world with nothing but confusion to guide you. 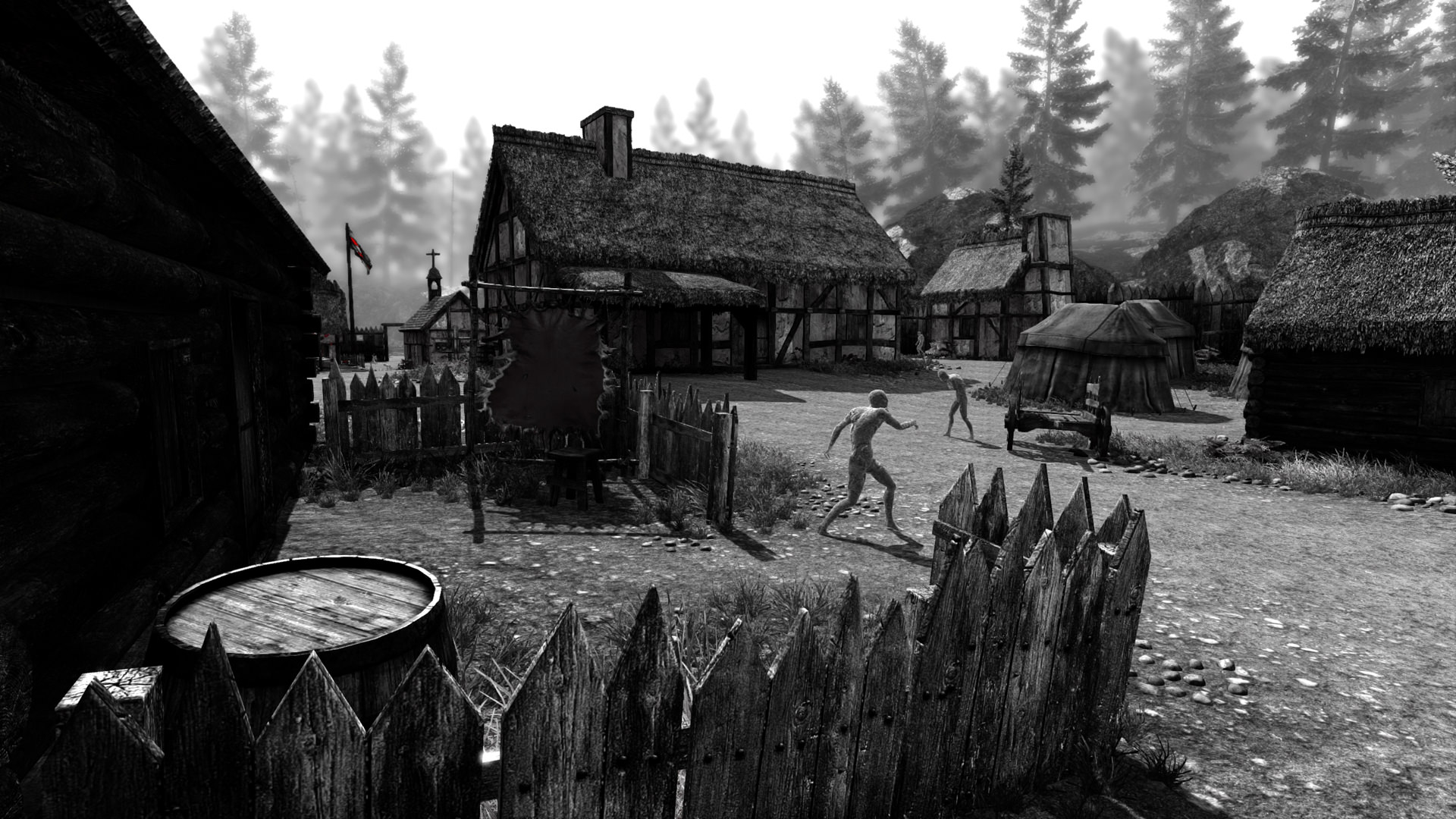 People made of ash in a seeming state of panic? Oh yeah, nothing to worry about.

The first problem is the undead conquistadors and native Americans you’ll have to deal with. This is foremost a stealth game, with a fairly unforgiving mechanic: the gimlet-eyed conquistadors will burn after you if they catch a glimpse of you, or if they hear you – and the damage they do is brutal. You’ve access to hatchets, bows, crossbows, pistols and muskets (as well as some buff charms) but you’ll stick to the quieter weapons if you’re smart because a crowd of these undead enemies will see your vision occluded by dying blood very quickly. There’s an element of Dark Souls difficulty to the game – and some of the enemy encounters did seem a bit unfair or spammy – but when you learn the rules it becomes a lot easier to handle.

(You will die a lot, however. I guess you could play the game without dying, but you would most likely be only moving when the wind blows, occluding your steps – and your playtime would increase exponentially. Having said that, play this thing with headphones, as sound is crucial. )

Oh, there’s no way this will end badly at all.

The second problem is that it’s not just undead enemies you have to worry about: it’s the settlers who brought their pettiness and fuckwittery to the colony. They’re only visible in a creepy otherworld version of the area that you visit by ringing a bell. There, you’ll deal with ghostly shades telling their stories, and undead metal-skulled monsters (and skeletons) who are determined to see you join their number.

The game is largely open-world, or rather is a series of large maps linked in sequence. There’s a world map you uncover by moving through the game’s locations, and fast travel allows you to skip to any of the forts or checkpoints you’ve uncovered at any time, providing you’re not in the middle of combat. But even with a map, there’s a real danger of getting lost: the woods are quiet – mostly – and full of dangers that will hunt you down easily. It’s difficult to maintain enthusiasm, sometimes, when you’re insta-killed (and reset to the last checkpoint you visited) on the verge of clearing a location of enemies, but I did find myself sitting on the edge of my seat while I played, so that’s a reasonable endorsement.

The lack of direction – you’re left to pick up the story on your own, when you’re not being arrowed to death by revenants – can be frustrating, but things will click pretty quickly. There’s a lot of reliance on notes and ghost-chats as a story-delivery mechanism, and the eyes can glaze over a little in these sections. You investigate shades’ stories – helping them to remember who they are – by speaking to them, and by uncovering evidence which will spur their memories. It becomes quite visual novel-like in these moments, though I do feel it wears out its welcome by the game’s end.

HOWEVER, the ending was pretty great, and not one I expected, so I didn’t feel the slog had been for nothing. It fit with the story without being unpredictable, and I didn’t really see it coming, so that’s more than I’d usually expect from a gaming narrative. 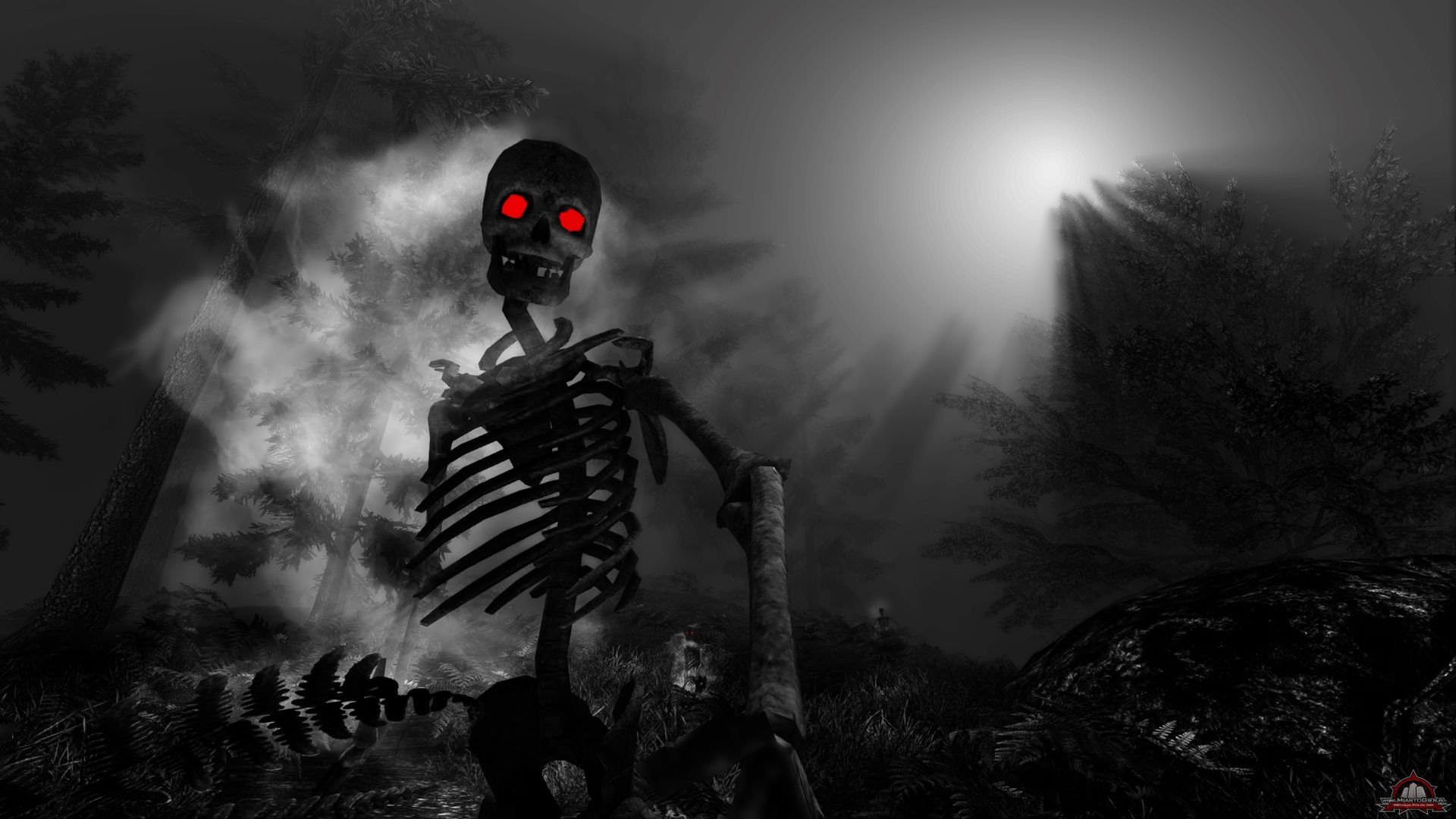 You can play Betrayer in colour – an option patched in later, I think – but I didn’t bother. (Though I must admit, screenshots of the colour variant give the game a pretty nice hand-tinted look.) The default black-and-white aesthetic is great; it made me think of another game I’m keen to play, The Return of the Obra Dinn. It’s suitably old-timey, evoking the feel of long-exposure photography, but it also adds an element of visual confusion.

(It felt a lot like I was playing in the same kind of world created by A Field In England, which is pretty high praise.)

The red of enemies sticks out, yes, but there’s also a real feeling of claustrophobia as you hot-foot it across the landscape, moving from tree to tree. What’s around? Is that fog or a ghost? Where the fuck am I? There’s a feeling that the landscape is unreliable: neither photorealistic nor pure illustration – something that adds to the tension of the game. David Longo’s art direction in this thing is superb, and when seen in-engine, suitably freaky.

(There’s a decent amount of what the fuck was that? moments throughout, don’t worry.)

When it’s not on sale for mere cents, Betrayer is five bucks on Steam. It’s well worth the investment: I think I got about 15 hours out of it, which is a much better time:money ratio than a lot of games I’ve played.

Next up, Singularity. This is another one I’d wanted to play for a long time, because it seemed focus-group-created for me. It’s a none-too-serious sci-fi story involving the manipulation of time, Soviet-era research and an abandoned island. And monsters and propaganda and vaguely valvepunk aesthetics. And this opening screen: 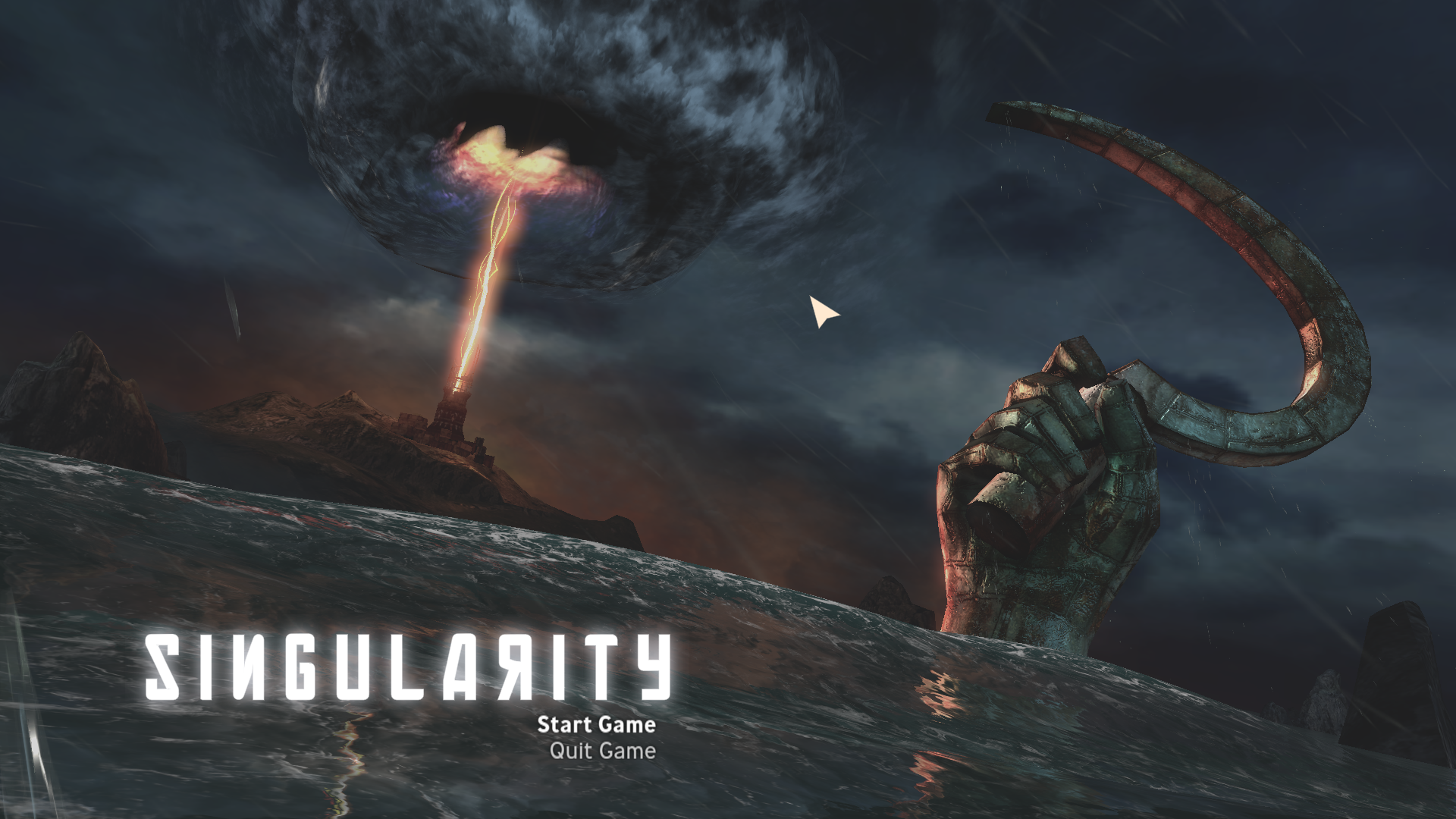 Start as you mean to go on, really.

The game begins with you, grunt-called-Renko helicoptering in to a place called Katorga-12, near Russia. Turns out there’d been secret research into an element called E99, and, well, shit got fucked up.

This trend continues with your helicopter ditching after a massive EMP blast, leaving you and a buddy stuck on a Cold War-era island that’s conveniently full of mutants. At least, until there’s some time-stream fuckery and you’re transported to an alternate timeline where the CCCP is running the show, all triumphal statuary and Fallout-style propaganda flicks.

Make no mistake: this is an alternate history and dodgy SF lovechild, and unashamedly so. It screams GENRE FICTION in a loud, suspect accent, and I love the game for it. There’s borrowings from other games – notably Half-Life 2‘s gravity gun, Bioshock‘s RPG-shooter and narrative-through-recordings, and Fallout‘s cheery ’50s modes. But they’re mashed up into something that’s unique, yet slightly underdone: there’s a distinct feeling of corner-cutting at play here, or of rushed production, which is a shame as the setting and atmosphere created – at least before the plot rockets onwards a bit – is excellently eerie.

This Zero Punctuation spoiler-filled review nails most of the frustrations/irritations with the game, though it’s worth noting that the game’s development wasn’t ideal. This article lets a dev explain the fuckwittery involved, and provides some context.

The gunplay in the game is pretty solid, and the game progresses as you’d imagine a fairly linear shooter to go. The interest comes from the Soviet tech you discover: there’s ageing mechanics you can use against structures or enemies, as well as force-field generation and gravity control. There’s not many games that will let you reconstruct a sunken ship using naught but a gauntlet and science! but this is one of ’em. Added to the flits across decades, the popcorn factor was high. 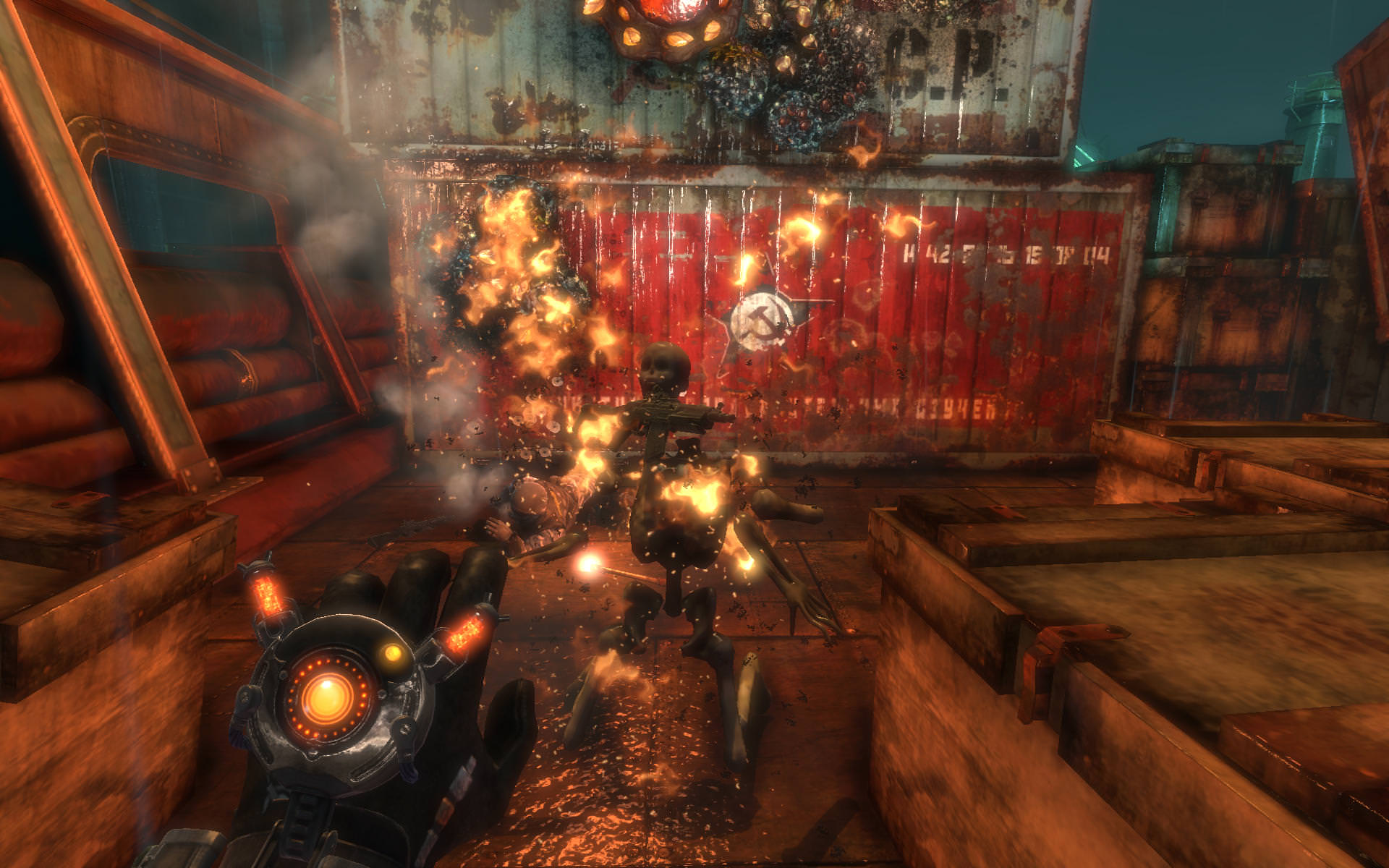 BONES TO DUST MOTHERFUCKER USA USA SOMETHING SOMETHING.

I raced through the game pretty quickly – it’s not a difficult play – but was positively disposed enough to see all the possible endings through. The outcomes change – mostly predictably – but the narrative stays true to the tone that’s been established. It’s cheese, yes, but it’s delicious, delicious cheese. It’s hand-wavey as fuck, but the setting and kinda camp approach caused me to forgive a lot.

Purchasing Singularity in Australia is a fucking drag. You can get it on GOG, but it’s still $30, even though it came out almost a decade ago. There’s the PS3 version, which is probably the easiest to nab here. And then there’s Steam, which won’t show you the game from an Australian IP address, but has it for sale pretty much everywhere else. The only real option for a Steam activation is to be gifted it by someone outside the country, or to buy it on the Humble Store and activate it after the fact.

(That said, I do have a standalone PC copy, unused, if anyone’s looking. Give me a shout if you want it.) 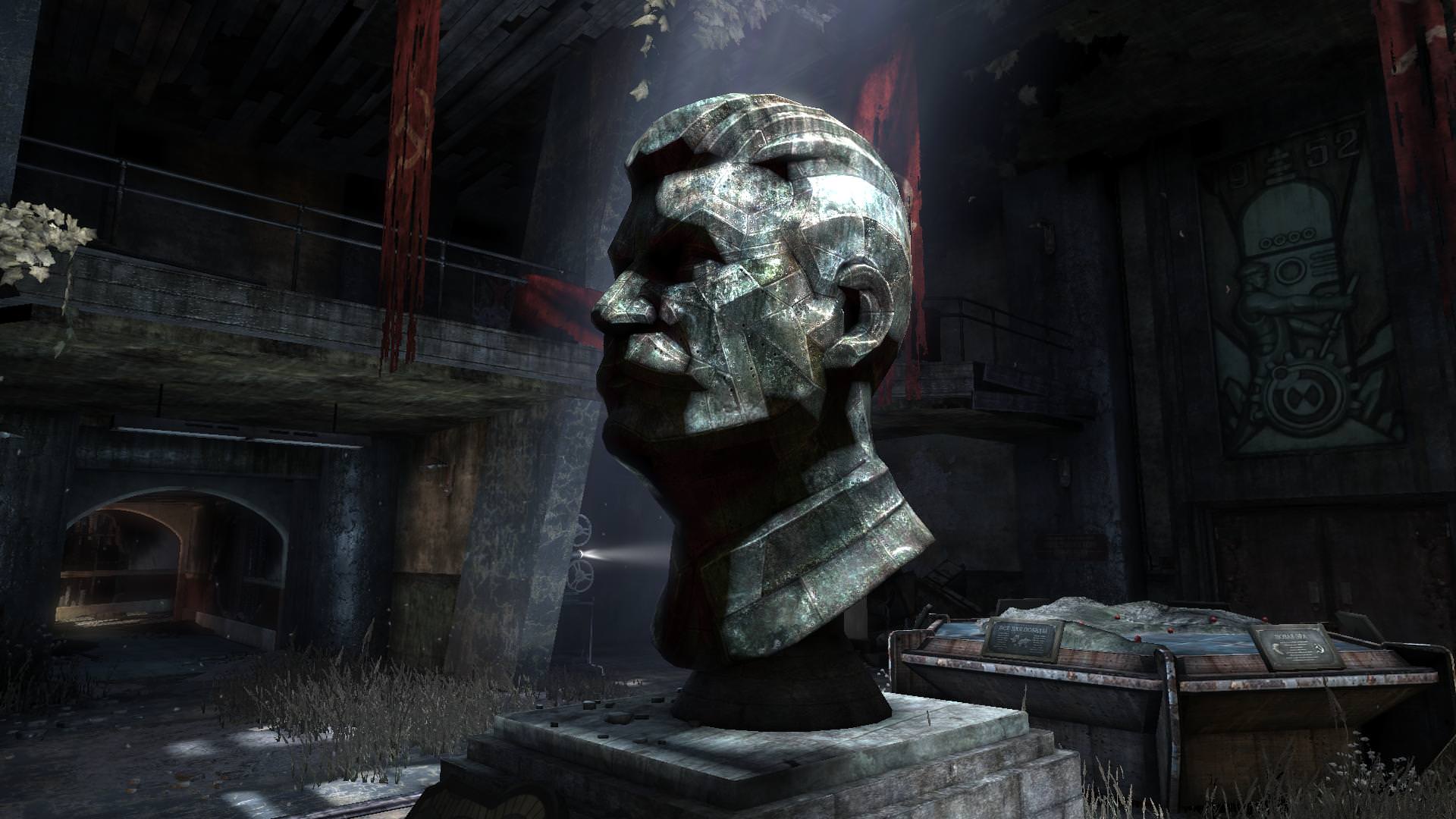 Welcome to my city under the sea! Hang on, wrong dictator.

I think the thing I liked about both these games was the way they engaged with typical game mechanics – FPSes, investigation of novel surrounds – and tried to tell a different kind of story with each. They are both strange, cheesy in some regard but struck me more than other, more polished games did. I enjoyed them far more than I thought I would, and would recommend them if you’re after something a bit skew-whiff to play.