I had just finished playing the three Call of Duty: Modern Warfare games on PS3 in an attempt to catch up with a franchise I’m about 200 entries behind in – TLDR: surprisingly short, still look good even on last-gen hardware, still kind of shocking and completely popcorn in a large set-piece YEAH MAN kind of way that I’m vaguely embarrassed about – and I figured I needed something short and sweet to break up the testosterone. Something completely different.

So of course I picked the Japanese-designed game where you’re a cheerleader who fights zombies with the aid of her boyfriend’s decapitated head.

The game’s a Suda51 game, which probably tells you all you need to know. He’s known for games that are either brilliant or terrible (or both at once) such as Killer 7 or No More Heroes, but he’s also… well… a guy with fetishes.. This page details some of the tropes he likes to use, though I must admit I was surprised that nobody in this thing was a luchador. Most of the time he’s diverting, creating the sort of games that engender a shake of the head with an Oh, Japan! comment, because playing his stuff is like being stuck in an idiosyncratic Engrish nightmare.

With this game, the creator had to share: James Gunn, responsible for scripts for Tromeo and Juliet and, uh, Scooby-Doo (yes, yes, and some Guardians of the Galaxy stuff) was involved. So it’s perhaps not 100-proof Suda51, but it’s right up there.

The idea is simple. You’re Juliet, a cheerleader, and it’s your birthday. Of course, you’re also a zombie-hunter, as is the rest of your family, including your greaser dad and your two sisters. Which is lucky, really, as it turns out that Swan, some Marilyn Manson-aping guy – seriously, he has fucking pentagrams on his gloves – has decided to fuck up the school and your life by opening a portal to another world and releasing hordes of zombies (and super boss zombies) into what appears to be a pretty typical Valley Girl existence. All because people aren’t nice to him, or won’t listen to his poetry or don’t appreciate his cravat or whatever. 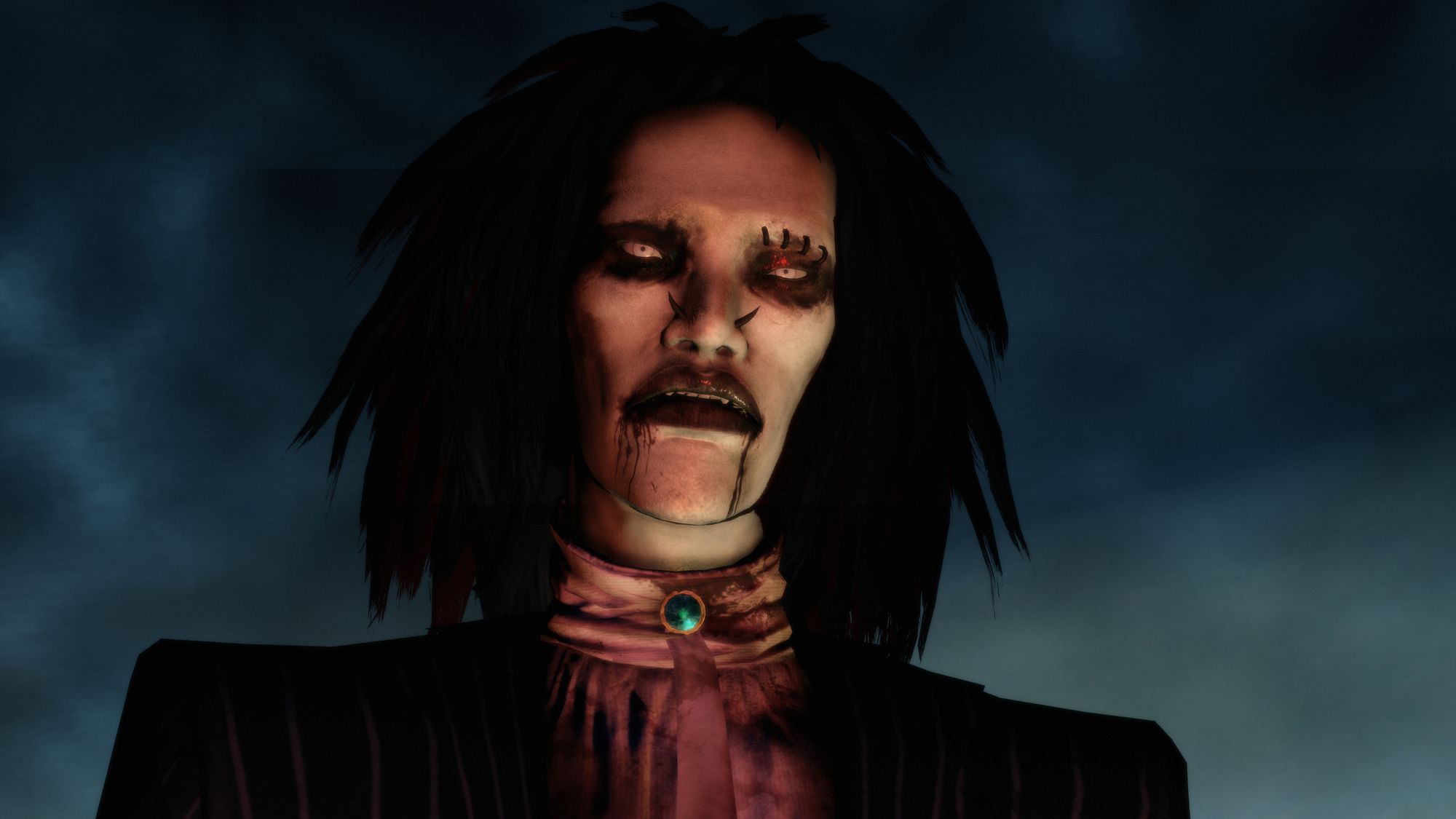 And what have you done that’s good since Mechanical Animals? NOTHING.

(All of this is pretty much explained by your panty-fetishist sushi chef/sensei, incidentally.)

Things get worse when you discover your boyfriend, Nick, has been bitten by a zombie. Well, things get worse for him, because he wakes up to discover that his head’s been cut off and mounted to a piece of preserving tech that also includes a tie for some reason. He’s alarmed to note that he can talk even without a thorax, and Juliet explains that it’s magic rather than a surgical advance. 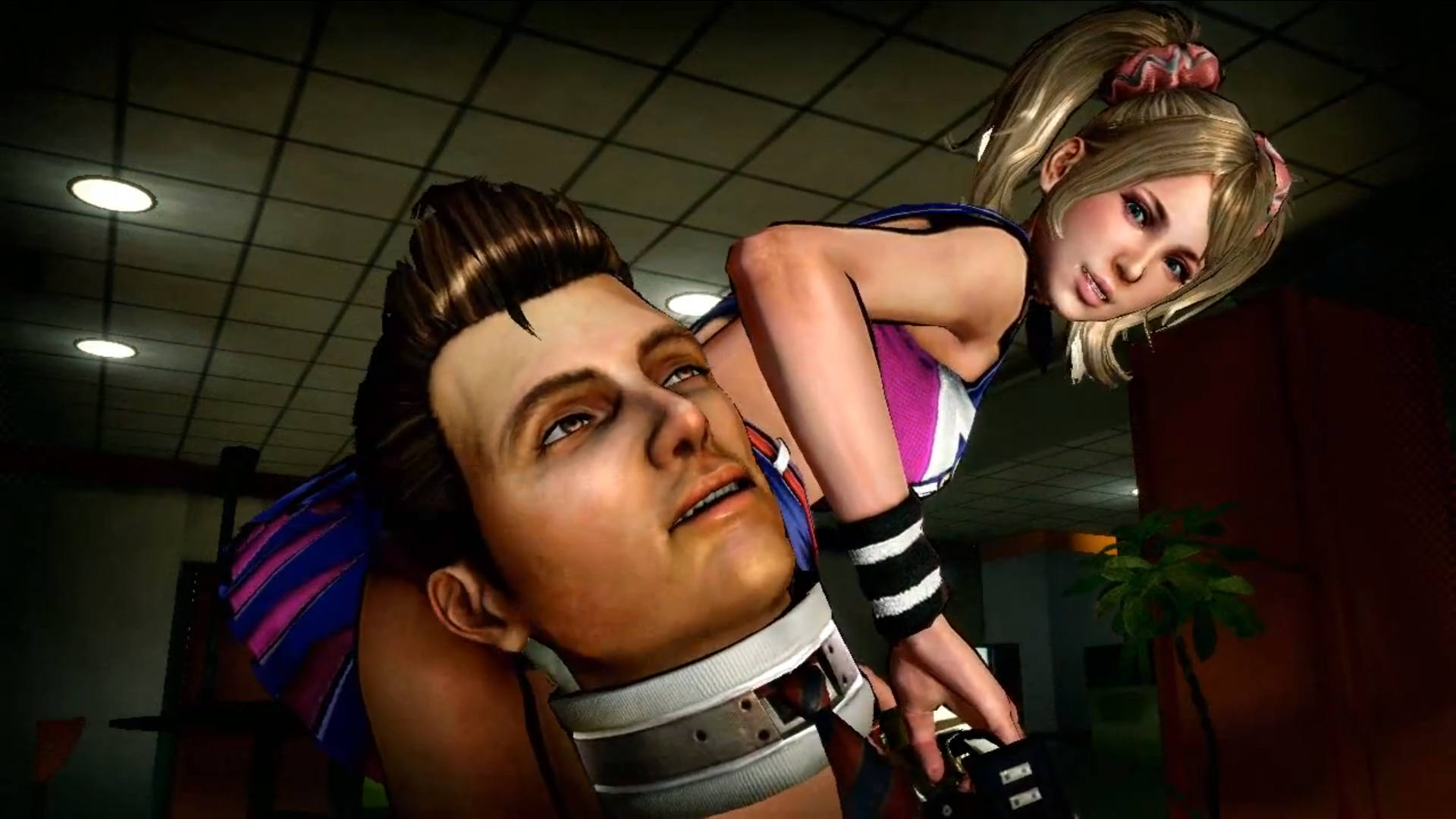 What plays out over the course of maybe six hours is something a little like an ’80s teen horror in the form of Buffy The Vampire Slayer fanfic. It starts off pretty well, until you realise that the battling isn’t particularly great. The camera wants to show you walls rather than enemies, the aiming system snaps to anything except what you want to kill, and you have to buy decent fighting combinations with coins generated by stylish fighting, and the use of Sparkle Hunting, which makes as much sense as you’d imagine.

Oh, and there’s minigames to pad out the experience. Mostly they’re a bit of a breeze, but the baseball one can go fuck itself. It’s nice to see the usual mechanics – there’s not a lot of them, I must admit – being used in some different places, but a lot of the minigames have weird difficulty spikes in places, and some are outright painful. They come across as filler, which is not exactly something you want in a game this short.

(You can increase the length of your playtime by trying to get A+ rankings on each of the sixish levels, or by competing against other players to rise up the game’s leaderboards, but really I can’t imagine anything more tedious: this is not a game with hidden post-completion depths.)

The levels each have a horror-film tribute somewhere within, and the action is kept moving along with plenty of quips and “what the dick?” moments – yes, that’s one of Juliet’s catchphrases – and each ends with a multi-stage boss fight. Admittedly, some of these are cool – ever killed a drum-soloing zombie Viking helmsman before? – but they end up outstaying their welcome almost universally.

Then there’s the real problem with the game. I can handle how broken it is, how there’s some definite Japanese-take-on-American-culture oddity. But the way the supporting cast (except for Nick, mostly) treat the girl with the chainsaw.

Juliet is a kind of cool, though obviously exaggerated character. She’s a hotbody cheerleader, but is also in charge the whole time. She has agency and the male supporting characters are definitely secondary. She won’t let the camera perve on her. She kicks arse and is strong and confident. But the amount of abuse she receives from the game is pretty incredible. You won’t go more than a couple of minutes without her being abused by some abomination, or creeped on by some fucker missing some limbs.

I get that a lot of this is Freddy Krueger-style “…bitch!” references, and that they fit the approach the game is trying to make, but after the hundredth time it comes across the way small kids do when they show off their swearing chops. It’s not wry or clever; it’s just fucking lame. Having NPCs crack on about her breasts or arse continually, or talk about how they’re going to use her sexually after they’ve defeated her are dispiriting and completely wrong. It takes something that, for all its grindhouse styling, could actually be quite bubblegum and positive and makes it a chore to get through.

The secret weapon against the unrelenting tide of narrative clangers in this thing is Nick, the severed-head-cum-weapon boyfriend. He’s aghast at the fact he’s just a head, and his desire for death grows ever stronger as the game nears its end. I guess it’s unusual for the voice of reason to come from a glorified butt-trinket, but here we are. 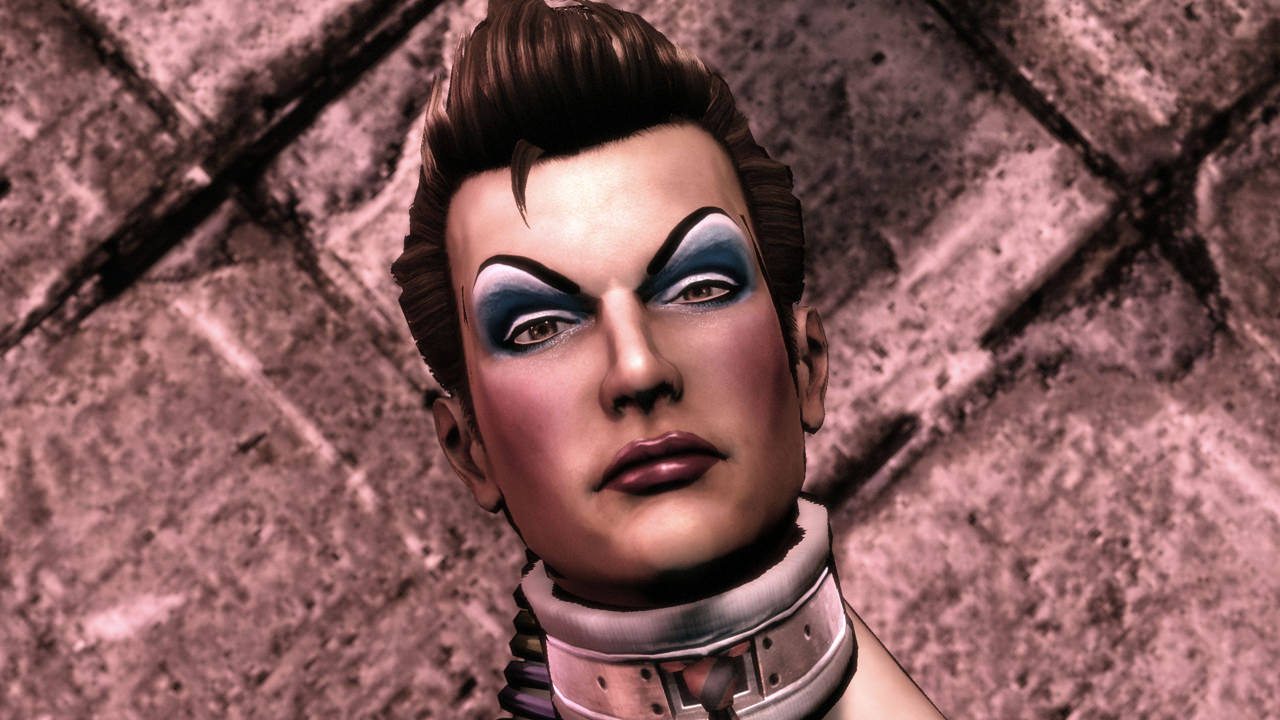 This is not the face of a happy man. A fabulous one, yes. But happy? No.

I think what people remember about this game is the presentation, and the high concept idea: cheerleader fights zombies. It’s something that should be great, but the game seems to actively work against itself most of the time.

So, one for the trade pile, I suppose. It’s a shame, as with a bit more effort, this could’ve been great trash, rather than just… well… trash.