So, I followed up on my previous stint of Nazi-killin’ joy (briefly covered here) with a run through Machinegames’ newest instalment, Wolfenstein II: The New Colossus.

Let’s just say that if you like machine-gunning fascists to death, it’s a good game. The lengthy trailer above should give you a good idea of what to expect if you’re unaware of the series thus far.

The game starts at the end of Wolfenstein: The New Order and sees our severely-wounded hero, William “B.J.” Blazkowicz, bundled aboard Eva’s Hammer, a gigantic U-boat commandeered by the rebellious Kreisau Circle, where he floats in and out of consciousness while bits of his organs are removed because let’s face it, you did just survive a nuclear cannon blast.

Oh, there’s no way this could possibly go badly for anyone.

Fast foward five months, and you’re awake, to discover there’s a baby on the way, and that there’s Nazis on the boat. Big Bad Frau Engel has found the rebels, and so it’s up to B.J. to wheelchair his way around the space, killin’ Nazis and praying for death. Eventually, there’s more narrative framing – you’re taken on-board a gigantic aerial platform, the Ausmerzer, to see a colleague beheaded, to watch Engel fat-shame her daughter, and to gain a fancy suit of mystical armour, before escaping under the sea once more – and the game begins in earnest. It’s essentially the story of B.J. being pissed that Nazis have taken over the US so completely, roped in with a tale of revenge against both family and fascists.

Eva’s Hammer acts as a base of operations for the game, and it adds periods of downtime to the action – gunplay as solid as other entries – which work well. There’s a training course in the bowels of the ship where you can hone your skills, as well as plenty of backstory to uncover. It’s ridiculously large, even by mega-tech Nazi overkill standards, but it feels real enough that I bought it pretty much completely. 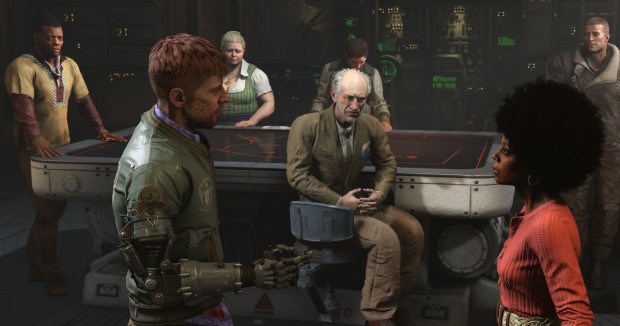 House meetings, but for submarines.

Eventually, you’ll swell the ranks of your crew with a Black Power-style group led by the impressively profane Grace Walker and her alien-centric partner, Super Spesh. It adds a much more revolutionary feeling to the game that makes it read a little differently to the kill-all-Nazis vibe of the previous games. Sure, you still have to kill all Nazis, but this time that job isn’t down to just some superheroic steroidal dude like, well, B.J. – it’s something that everyone has a stake in.

From there, the game continues, zipping along professionally, though occasionally unevenly. You’ll travel to Venus to audition as yourself in a film of how you were brought to heel, you’ll ride a rocket-train underneath Area 51, and you’ll move through a New Orleans in the midst of ethnic cleansing. There’s a lot to take in, but the overwhelming feeling is of forward momentum: just keep going, B.J. 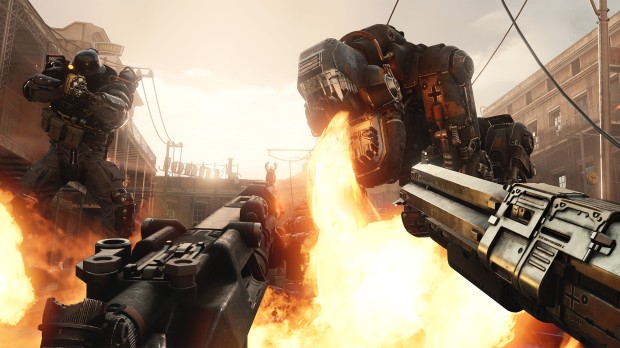 There’s more character development in Wolfenstein II than there has been in other games in the series, I think. Certainly, we have it confirmed that Blazkowicz is Jewish (and that his mother died in a death camp), as well as being forced to witness some pretty horrible father-son interactions. It’s unsurprising, given the weight of his past, that B.J. spends a whole bunch of time during the game alternately lamenting and praying for his impending death. When he’s finally caught by the Nazis, put on show-trial and ultimately executed, it seems that we’ve reached the end of the road – except his decapitated head is preserved and stitched to a stolen Nazi super-soldier’s body. The üntermensch becomes the übermensch, and vice-versa.

Part of what makes this game a delight to play – certainly moreso than the actual gameplay, which remains about the same as the previous Machinegames instalments – is the attention to detail. The thought that’s gone into the design of the game is impressive, embracing both Nazi aesthetics and Googie trends, to reveal some enjoyably fucked-up, clean-lined machines and spaces. The feeling of a subjugated America is complete. There’s Klansmen walking the streets in full regalia, part of a power-sharing deal with the occupying force, and everything is that hair off as people prepare to stop using English in their lives. It feels unsettling, but that’s the point. It also feels remarkably suitable, in an alt-history kind of way, right down to the German take on pop music that’s sprinkled throughout the game.

There’s always an implied criticism of the forces behind the transformation, but it’s hard to ignore how similar a lot of what we see in the game is to how design was influenced in the real world: to the point that a space base on Venus looks a lot like a 1970s airport. What’s creepy is that so much of the design work seems so familiar.

The game plays out over about a dozen hours, maybe, and is thoughtful popcorn all the way through. Its story – at least in the straight-up action parts – moves at a fair clip, and while you can complete it using stealth as your major tactic, it’s the sort of game that pushes you towards rash action instead: you’ll want to run into the middle of a bunch of armoured-up Nazis and start hacking away because fuck ’em, they’re Nazis. The settings become more and more grandiose, and even when some of the battles seem a bit routine – hey, let’s spawn another couple of those big guys you just beat! – the settings are phenomenal.

Oh, and you can kick Hitler’s head off if you want to. I mean, they’ll kill you, but you can stomp a senile Adolf to bits, which is certainly something.

Even when you reach the end of the game, it’s not GAME OVER. There’s a bunch of optional objectives you can complete if working through ye olde side-mission checklist is your thing. From upgrading weapons completely to finding toys for Max to finding excellently Teutonic albums, there’s something that’ll have you returning to scratch the completionist itch. I didn’t finish them all, but I did make a point of executing all the high-level oberkommando bosses, found in play-throughs of areas you complete in the course of the regular game.

The only problem with this part of the adventure is that it relies on your having enough Enigma codes to decrypt their whereabouts. And though you can pick up a fair amount of cards from officers you kill through the narrative, you’ll end up having to grind a fair amount through levels again and again to reach your goal. I didn’t mind it so much, but it did make the ease with which I beat the final, secret boss-level a bit anti-climactic.

(Well, not so much the level, which was dark and creepy. But the boss-fight itself, taking place in the shadow of a ruined Statue of Liberty, was over in a couple of minutes thanks to a well-placed car and a rocket-launcher. The game seemed to have kind of given up at that point. “Eh, you killed that guy, and though it took you ages to beat another version of this robot thing at another point, you can have this one because apparently he can’t see you behind the car because of reasons.”)

I got precisely what I expected with Wolfenstein II. That’s enough for me. It’s long enough that you’re not ripped off, and short enough to ensure it doesn’t wear out its welcome. It’s not as thrilling as Wolfenstein: The New Order was, but it does have a higher level of wait, fuck I wasn’t expecting that! moments.

In short: like killing Nazis? Play this. I played on PS4 and thought it looked great, but imagine on a PC with all bells and whistles on it would be spectacular.

After I ruined Nazi domination of America, I figured I needed to play something a little more low-key, so I chose to give Kôna a whirl.

Kôna is a game I backed on Kickstarter a while ago, and it tells the story of Carl, a gumshoe in 1970s Quebec. As you’d expect, it’s fucking cold, and the job you signed up for isn’t the one you end up investigating.

The game is an exploratory adventure title, and is pretty similar to some of the other walking simulator games I’ve played. It’s not as much an interactive movie as something like Dear Esther, but it doesn’t provide as much latitude as, say, Life is Strange, either. It certainly doesn’t shepherd you along the preferred narrative path as most of the games in the field do.

Je voudrais not to be eaten by wolves s’il vous plaît.

Instead, the game treats you as an adult. You’re presented with an area of the frozen north to explore, with simple puzzles to figure out to move the story to its end. It involves, perhaps not in order, the idea of revolution and secession, alcoholism and moonshine, affairs, murder, hunting, the Cree nation, icy magic and the Wendigo. It’s a twisted little tale that plays itself out in around four hours or so, depending on how thorough you are about collecting every single piece of information that’s out there. You can complete the story without understanding it, but there’s enough backstory floating around that this shouldn’t really occur.

While the bulk of the game’s information is communicated by voice-over, there’s other ways to unlock meaning. You can take photographs as per Firewatch, and these will help fill out a notebook, explaining the crime you’ve stumbled across, and you can talk to others and trade. On the downside, Carl can freeze to death or be eaten by wolves, and save-points are determined by his ability to build a fire. It’s easy to get carried away and find you’re a long way from a fire, as Carl’s vision starts to blur and  his running abilities drain down to zero. 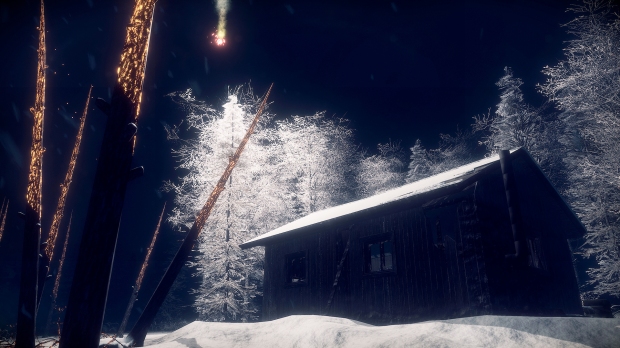 Oh for sure there’s nothing dodgy in there.

There’s obvious limitations in the game: things don’t break if you hit them with other things, unless they’re supposed to and you’re hamstrung by invisible walls, which hamper the feeling of open exploration somewhat. But what it gets right – the multitasking of trying to drive with the wheel in one hand and a map in the other – feels spot-on. The ending trek up and down a mountain felt a bit hammy to me (as well as glitchy) but I believed most of the story as it unfolded, accepting even the weirder parts.

Really, though, you’ll play it for the setting. It’s a resolutely Canadian game, and while some of it may seem a little unpolished or cheesy, I enjoyed my time with it. Besides, there aren’t many games that let you hoon around on a snowmobile looking for figures of myth, are there?

Not pictured: sick air from jumps.

You can buy Kôna on Steam now. It’s also on PS4 (and was on sale last week) if you’re a PSN member.