First up we have Destiny. Or, should I say, Destiny and Destiny 2? I should, really, because I played them both in a row, with very little break.

You know Destiny even if you don’t play it. Because it’s the game by the people who made Halo that had the biggest franchise launch ever. In the first week it made back its $500m cost because gamers love themselves some shootin’.

I, however, did not buy it when it came out. I picked it up stupidly cheap on the PSN when the publishers were looking for some Johnny-Come-Lately bucks. I figured that eh, I hadn’t played it, and I liked what I saw in the trailer, so how bad could it be.

The answer: not very but also quite a lot.

The game is a futuristic mostly-first-person shooter that works a little like Borderlands: shoot, loot, upgrade, rinse and repeat. It’s obviously not as cartoonish  – there’s a bit more grit in there – but that’s the general idea. It allowed me to play as a robot guy with antennae for ears who also flings around a big sword, though, so I was pretty happy to be diving in.

There’s a couple of classes you can choose from – stuff like tanks, rangers, mages included but with different name tags – and some different races and genders. Maybe playing a different class (I chose Hunter, so more distance-based stuff for me) gives a vastly different experience, but at this point I’m uncertain that I’ll replay to find out. At any rate, whichever class you choose, you’ll spend most of your time looking at your weapon and your hands, zooming out to see your whole body only in cutscenes or super gee-wow attack turns.

So I mostly looked at guns.

And let it be said, the guns were pretty cool. They provide most of the action here: run, gun and do stuff, Guardian. 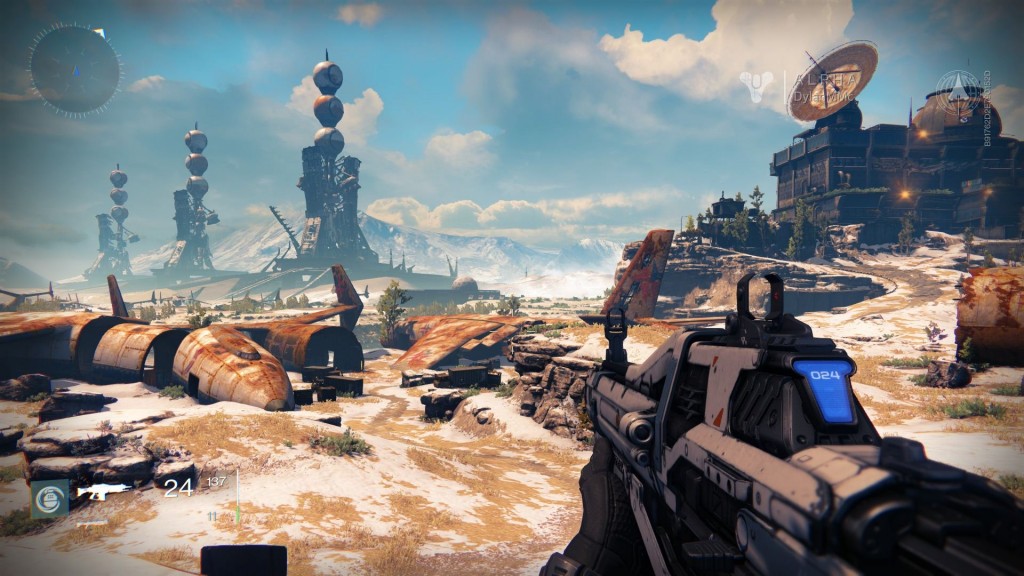 Guns and former Soviet space establishments. What’s not to love?

The doing stuff is pretty enjoyable. Being dropped into skirmishes, upgrading my skills to allow me to fire etheric arrows into armoured dudes: it’s very very addictive. Bungie know how to make shooters that play well, and that feed into that whole rat-brain MUST DO THIS MORE drive we all have. But that’s not the problem.

The problem is why.

Destiny seems to pride itself on being lore-rich. There’s a mystical planetoid (The Traveller), a handful of opposing factions, and a ruined earth to account for. There’s the mystical force (no, not the Force) that runs through everything, including your floating Siri-type buddy/expositor, and the fact that you appear to have been rescued from death to start kicking arse as a Guardian.

So there’s a lot of lore. The game just doesn’t give a solitary fuck about giving you any of it in a cohesive manner. 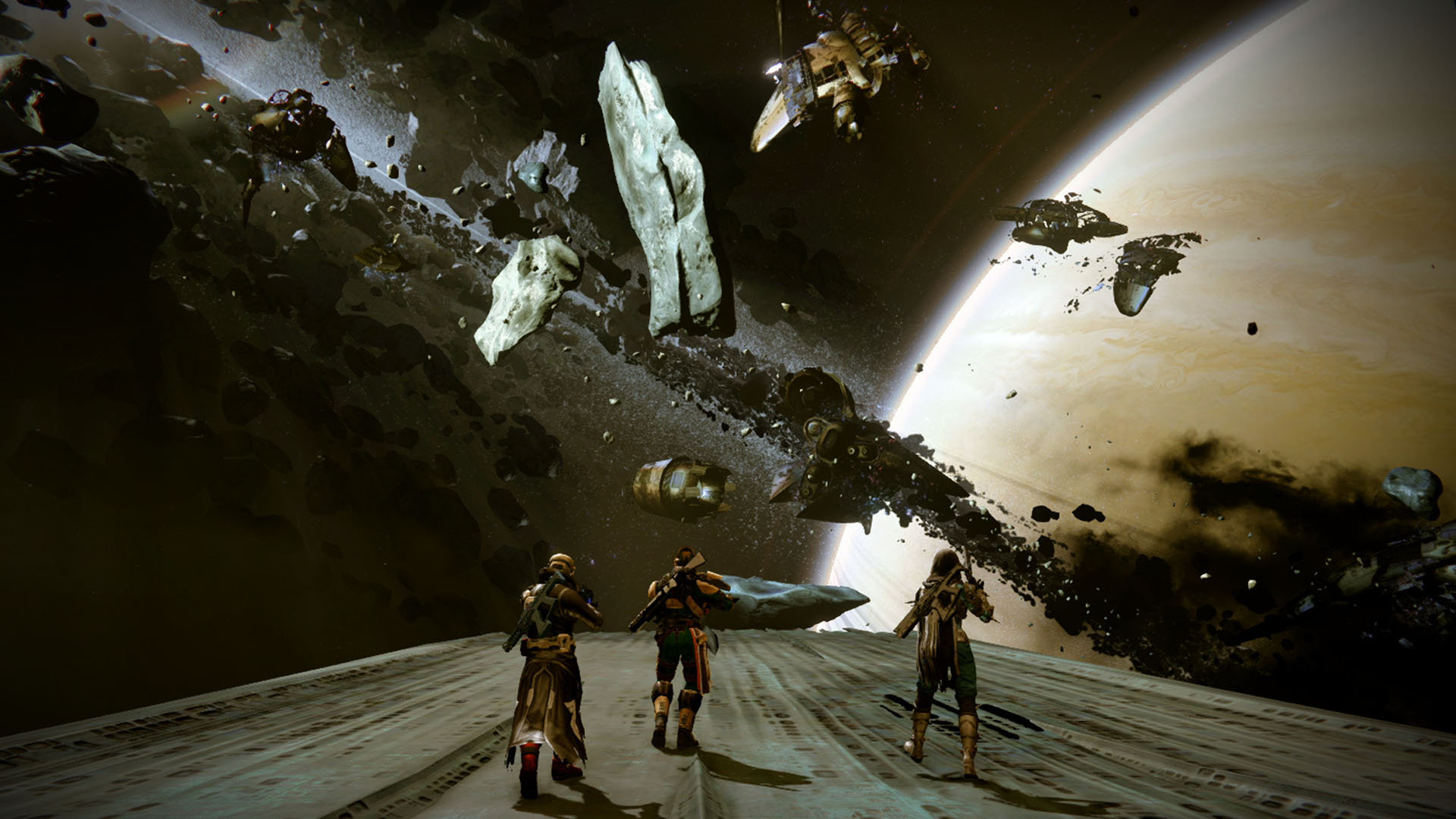 Guardians care not for OH&S.

When I started, all the DLC packs had been released for the first game, and so some lore I’d yet to experience was presented as assumed knowledge if I mistakenly started a DLC mission before completing a specific game one. Information is conveyed remarkably poorly, to the point that I ignored the backstory and just played through the missions, hoping that some wider relevance would come to me.

I hit the level cap and (almost) maxxed out the light/Force ranking in the game, but once I finished the actual stories – such as they were – there was nothing much to do. Sure, there’s a lot of missions to complete… but they’re busywork in a way I hadn’t actually experienced before. To move some missions on, you’d have to go to location x to kill y numbers of z combatants. Or you’d have to collect a certain number of doohickeys to enable the whatsit to reach its final form. Or you’d have to enlist multiplayer help in order to finish other missions because, let us not forget, these are multiplayer games.

(Multiplayer. I fucking hate multiplayer, and the couple of interactions I had with Grown Adult Men in this game reminded me of why I eschew playing games with other randoms.) 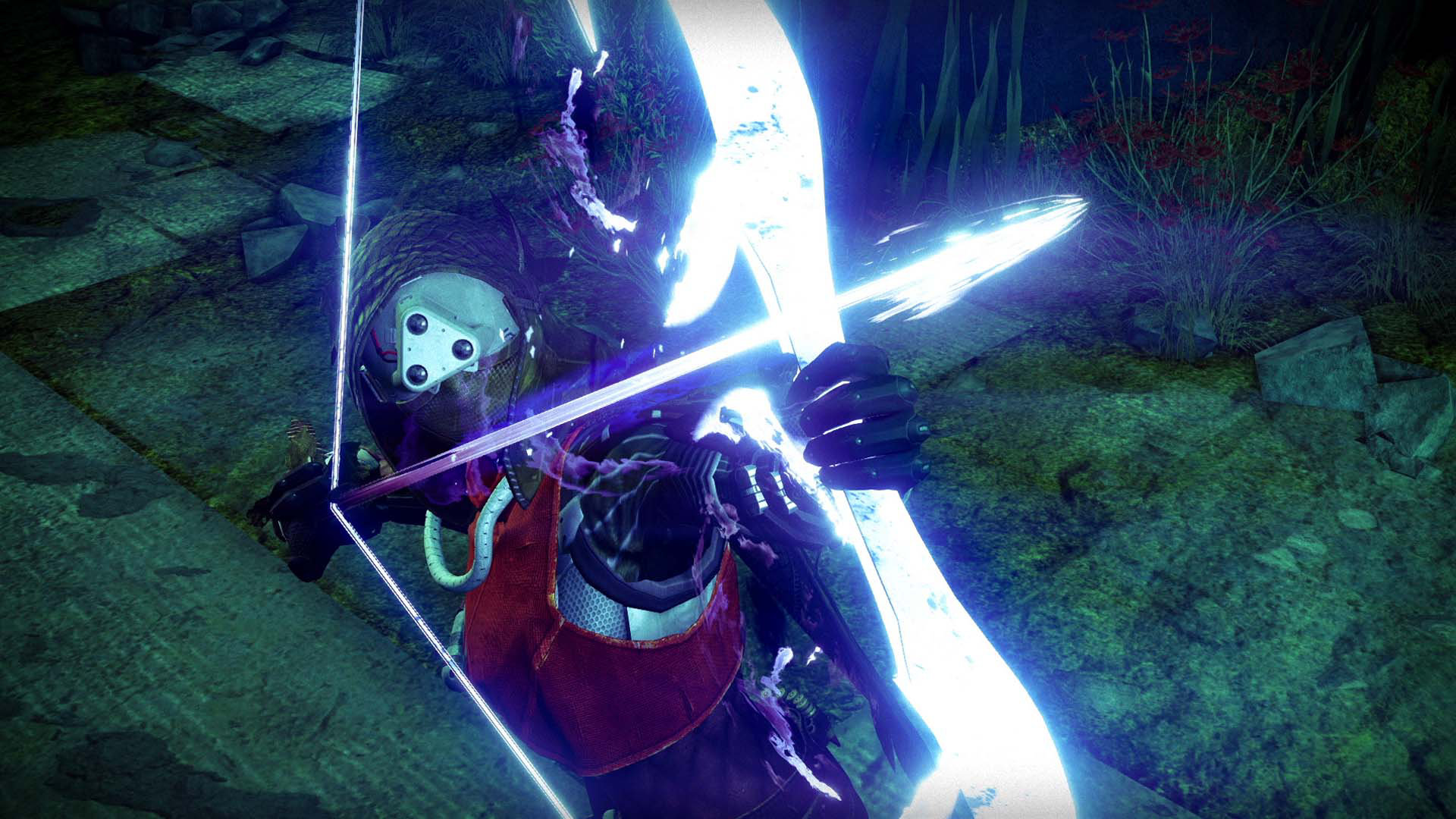 If I could fire this weirdly glowing arrow into multiplayer’s neck, I would.

(Oh, did I mention the loading screens? Wow. I hope you like looking at your spaceship in these games, because it’ll be how you spend hours of your time, depending on how long you play. You can’t actually fly this spaceship, mind: you can merely customise it so that while you’re admiring your virtual self flying through endless waiting periods you can ponder exactly how much fun it would be to, y’know, fly the thing.  BUT NO. NO FLYING FOR YOU.)

But the gunplay kept pulling me back in for just one more round. To the point that when I realised all the narrative had pushed into the busywork checklist approach to player interaction, I decided I had to move on. The devs had built this game that seemed designed for people who wanted to be always online, and only in that game, and who were happy to stick around in PVP-style stuff.

I’m not one of them. I like to feel there’s a reason for making my antennae-eared robot do shit, even if it’s the most tenuous of reasons. Asking me to do stuff in the manner of a gym teacher eliciting sit-ups isn’t gonna cut it.

But hey, I had another one of these games to get through, and damnit, I was going to do it.

The second Destiny game addressed a couple of my concerns. Once more, my robot dude was a Guardian, but this time around there was some Fucked-Up Shit to deal with. The narrative was given more importance, at least in how it was presented during the game, and it felt as if more weight had been given to the single-player experience.

I felt as if I had more of an idea of what was going on, and the DLC – particularly Forsaken, in which you avenge a mouthy robot – gave me more to work with, and more reasons to explain why I was travelling to distant worlds and shooting their residents in their face-holes.

But for the flashiness – even in the brief time between the first and second games, the engine tech looked much improved – couldn’t hide the fact that it was more of the same.

There’s a lot, lot more stuff to do in Destiny 2 but a lot of it seems tied to ephemeral awards: perform a couple of Crucible matches a week to perhaps get a fancy pair of boots? Do some raids – missions, really, but just done again – to maybe get a buff that you’ll use. Or won’t, because there’s new gear falling out of your arse as the body-count rises. 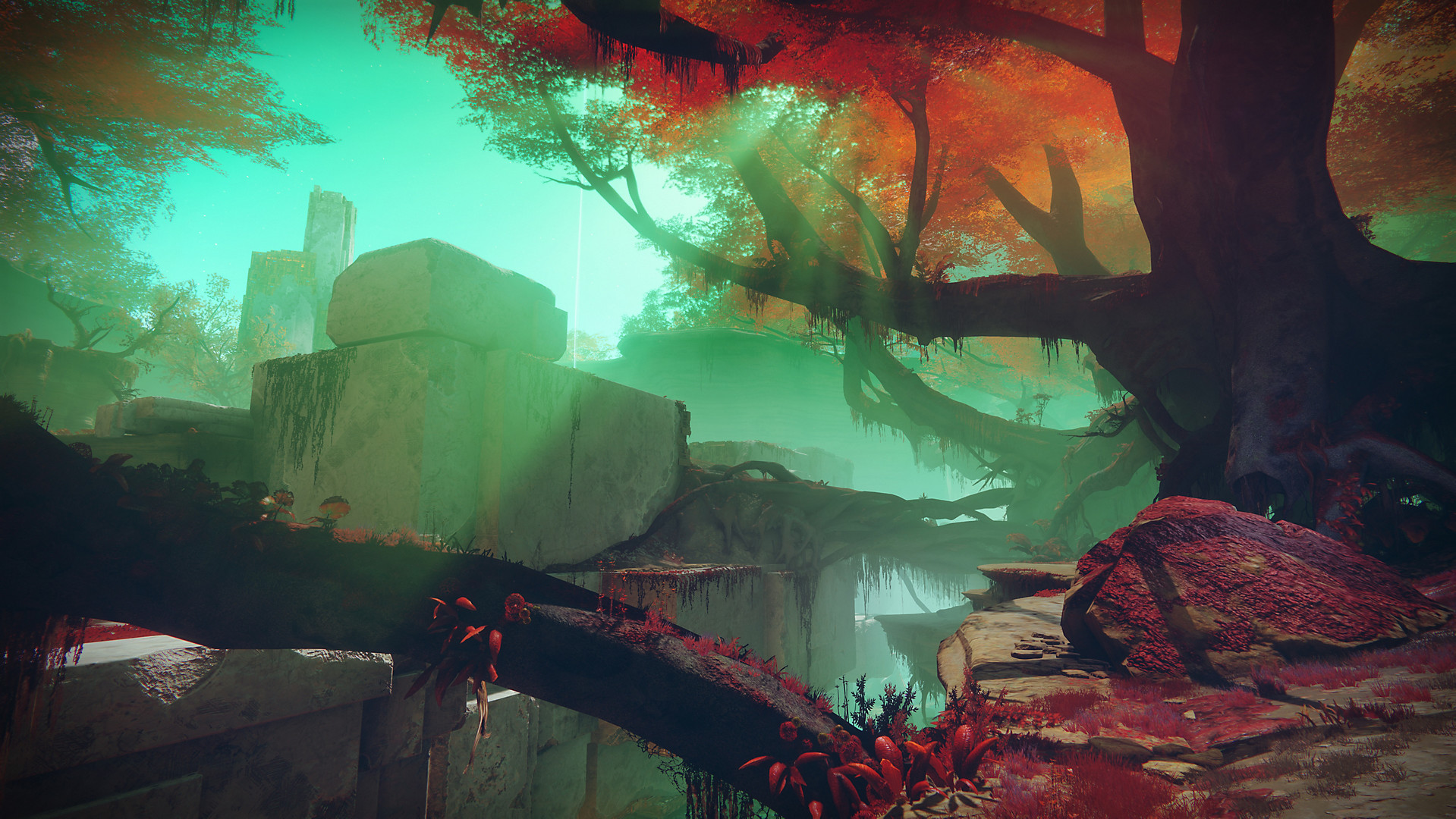 I could relax here for ages but SORRY GOTTA KILL PEOPLE INSTEAD.

It’s frustrating, because eventually I reached the level/light caps and once more I felt like I was waiting for the other shoe to drop. For something else to happen. There’s another expansion coming, but I’m not certain that’d scratch the itch, as Destiny seems predicated on the idea of upgrades and moving onward. The story is secondary, and that’s a problem for me  – almost as much of a problem as my dislike of feeling like a lab-rat, lured in by tasty, tasty gaming in the hope that I’d buy some Eververse credits.

I’ve gotta admit, it’s weird to finally feel that a game is acting badly towards you, or is trying to manipulate you in a bad way. That’s what I felt with these two games: I enjoyed them, but at the same time realised I wasn’t getting anything out of them that would justify the time I was sinking in. It was like playing pokies, but I was dressed as a robot.

So I moved on. And started dressing like a monkey instead.

Yes, a monkey. That Monkey.

Enslaved: Odyssey to the West was something I missed the first time around. It recently reappeared as one of the final 360 games to be included in the Xbox One’s backwards compatibility programme, so I guessed it was time to give it a go.

And look, it’s definitely an underrated game. But it’s also not a great one.

Part of this is because the age is apparent in some aspects. There’s a lot of acrobatic stuff which looks great, but is only able to be launched from one specific spot – and if you’re not in it, bugger-all happens. There’s some mushiness in the fighting, and a main character (Trip) who seems to be unable to do anything by herself. There’s about five different types of enemy. There’s some weirdly off-key dick humour from a humanoid pig. (Trust me, it makes sense in the game.) And there’s an upgrade tree that doesn’t do a hell of a lot, outside the health and shield sections.

And then there’s the ending.

Don’t get me wrong, I enjoyed myself. I mean, this is a kinda tribal-future take on the Chinese classic Journey to the West in which you play Monkey (yes, that Monkey). It has acting and direction from Andy Serkis. A soundtrack by Nitin Sawhney. A story by Alex Garland. There’s a lot to like, even if you have to put up with white-girl dreads to get to it. 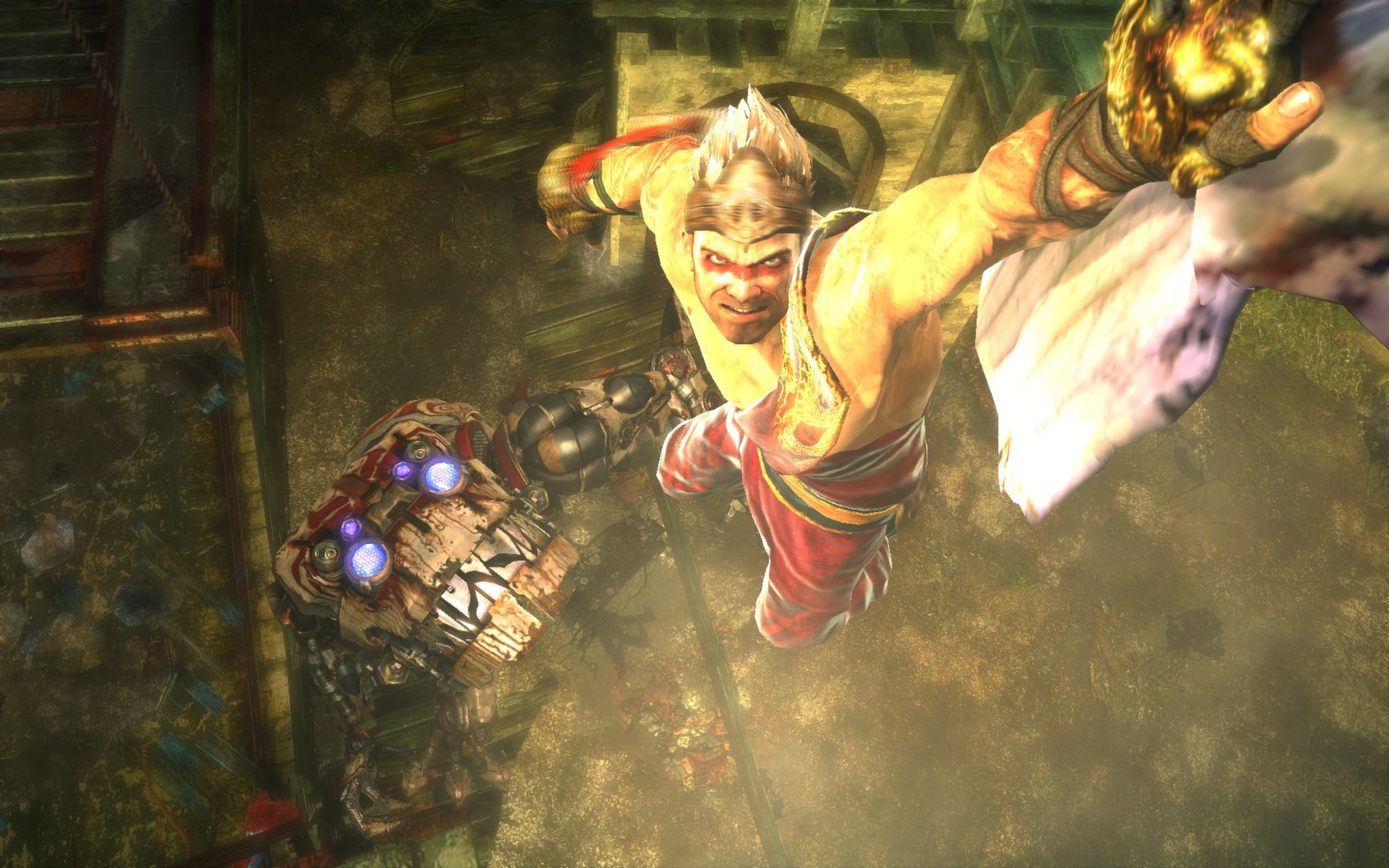 And asshole dogs, would you believe it.

It’s just that the game feels as if it was chopped up before delivery. That there was a lot more that was going to be included, but didn’t somehow make the cut. There’s a cloud-flying sequence (no machine guns, unfortunately) that pops up a couple of times that’s delightful and frustrating in equal measure, but it seems like a vestigial limb: something that was meant to be great but wasn’t given a chance to be used fully.

Saying all that, the game does have moments that make it worthwhile. There’s locations and vistas that are quite remarkable, and you can feel a lot of Uncharted or The Last of Us in the game’s depiction of an overgrown New York. The robot designs seem akin to those in the Nier games, and there’s something delightful about the way Monkey’s sash mimics a tail. It’s one of those games where the moments, rather than the overall experience, make it worthwhile. Mostly.

There’s a sense that a lot of effort was applied in very particular areas with the game, but that for one reason or another, the end result wasn’t as expansive as it could have been. It’s a shame, for sure. 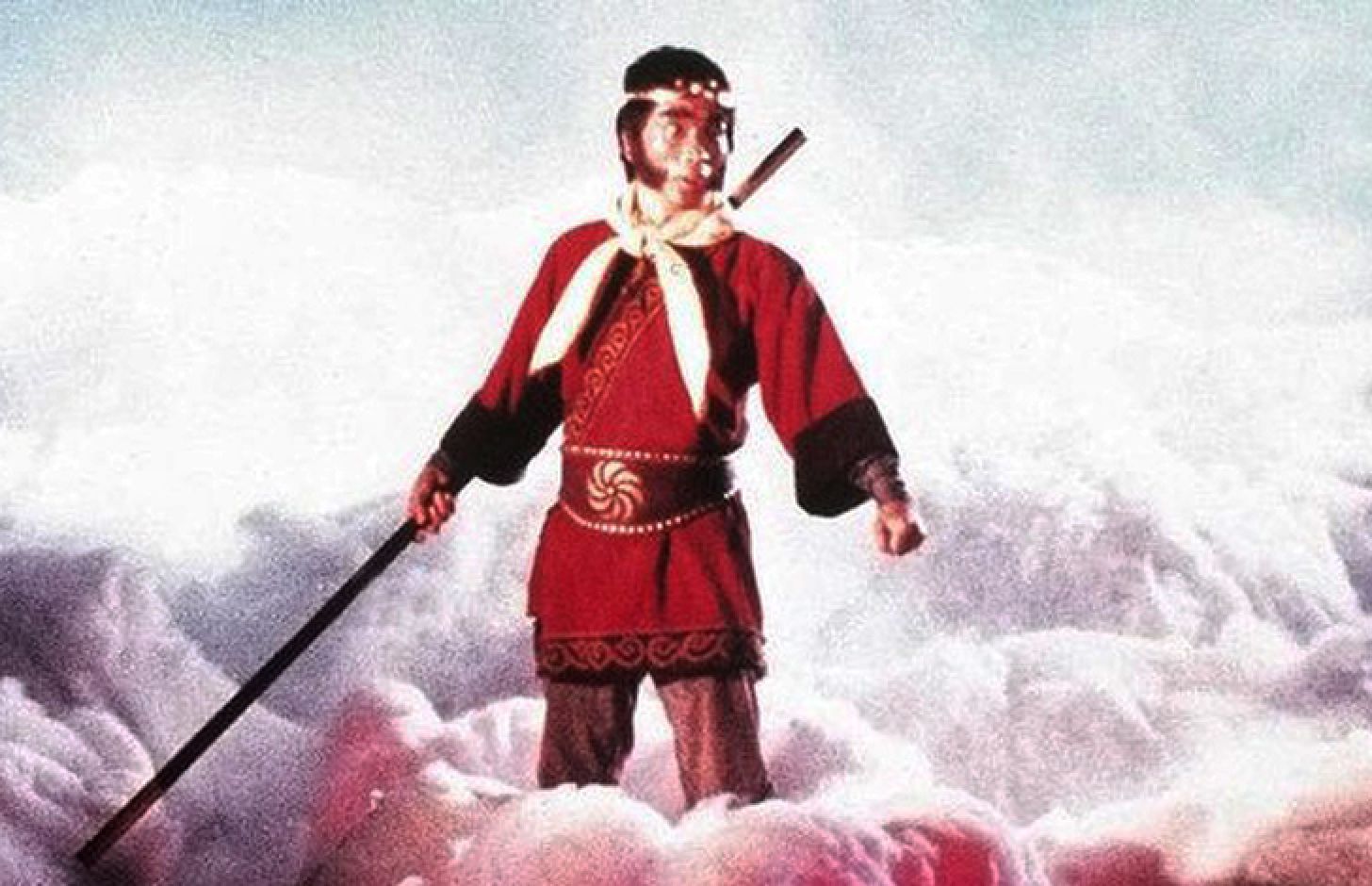 I mean, it’s not like adaptations have a high bar.

I’m not sure what comes next. I’ll be packing up a lot of stuff in the lead-up to moving to the new house – it’s still months away from completion, but I’m a terrible packer at the best of times – so I might try to burn through a couple of outstanding entries in the backlog before I have to tape ’em away for a while. There’s a good chance that the latest Assassin’s Creed and Far Cry games will get a look-in. But then I do hear Japan calling, now that my copy of Judgment has arrived… can good guys still hit people with bicycles?