There’s two games I did work my way through but never wrote about. I always intended on writing much more about both of them and had drafts for a while, but then I guess I missed my window. So take a couple of thoughts in lieu.

First game is Saints Row. Yep, the original one. I’ve had different entries in the series for years but have never actually gotten around to doing anything about playing them. So when the first game showed up on Xbox’s backwards compatibility list, I figured it was time to give it a go.

I’ve got to say, it’s a lot funnier than I’d given it credit for. It’s pretty obviously a Grand Theft Auto clone, but it held together a lot better than I imagined a game of its age would. It also provides a much more open playing experience than I’d thought. Enough to almost ignore the last-gen graphics, which is saying something.

The game’s story is pretty simple: take over the town and rise to the top of the gang tree, thou mostly silent player character! Mine looked kind of like me, kind of like David Duchovny, and was mostly seen in a samurai helmet and Hawaiian shirt. I’m both sad and grateful that none of the snapshots of the dude I took have survived.

Is it a good game? Oh, no. There’s weird difficulty spikes, wonky AI and the rigid mission failstates are absolutely brutal. But is it a good time? Is it fun to be a gangsta, tearing up toffs’ lawns while hair metal plays on the radio?

Well, duh. I’ll be working through the others, natch.

The next game I played through was a much shorter game, but one I’d had on my to-play list for just as long: The Vanishing of Ethan Carter. It’s probably best categorised as a walking simulator (and we know how much I dig those) crossed with a mystery, set in a Lovecraftian milieu, in which the player tries to discover the fates of a whole lot of more or less unlikeable people.

Obviously, I loved it.

The game is an exceptionally good looking production. There’s not a huge amount of challenge in any of the puzzles on hand, but that’s hardly important: the feeling generated by the experiences you witness on your journey through the strangely silent world are what drive the game. It’s where I certainly had the most fun: feeling like an explorer in an abandoned universe, piecing together the movements of people who no longer existed.

There’s a fair amount of handwaving goes on to explain how you can see things that’ve passed, but it doesn’t seem too unbelievable. There’s a tenderness and a light touch throughout a lot of the game, and I found it particularly endearing. I’m not certain it’s got the different-ending multiple play-through appeal of some other games, but I certainly feel like giving it another go, just to be enmeshed in that world once more. 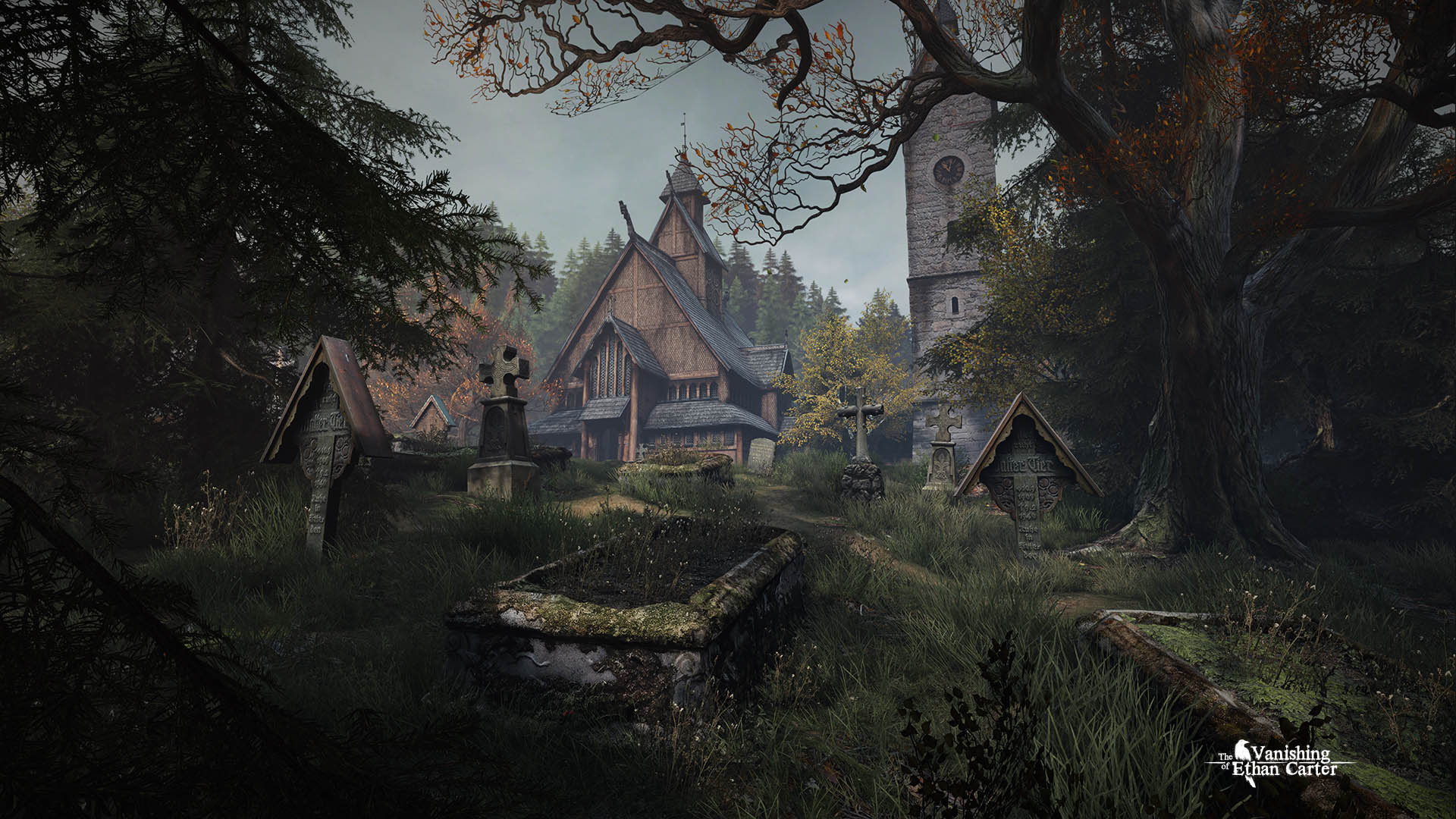 Not all the dead people here have backstories, but enough do to make it worthwhile.

I mentioned that I haven’t been playing games that much of late, and I suppose that is true. The reason is that formerly, I used games as something of a coping mechanism for anxiety. If I felt it coming on – and it did, most days – I’d be able to use games as a portable hole: somewhere to steal away to until things settled down.

Lately, I’m taking other steps to deal with things, and so I haven’t really spent as much time gaming as I would previously. This is both good and bad: good because improving my relationship with anxiety is one of the most important things I’ve done/am doing, and bad because, shit, I like to play games.

One’s taking the controls a bit more lately, though, and I’m not too fussed about that. 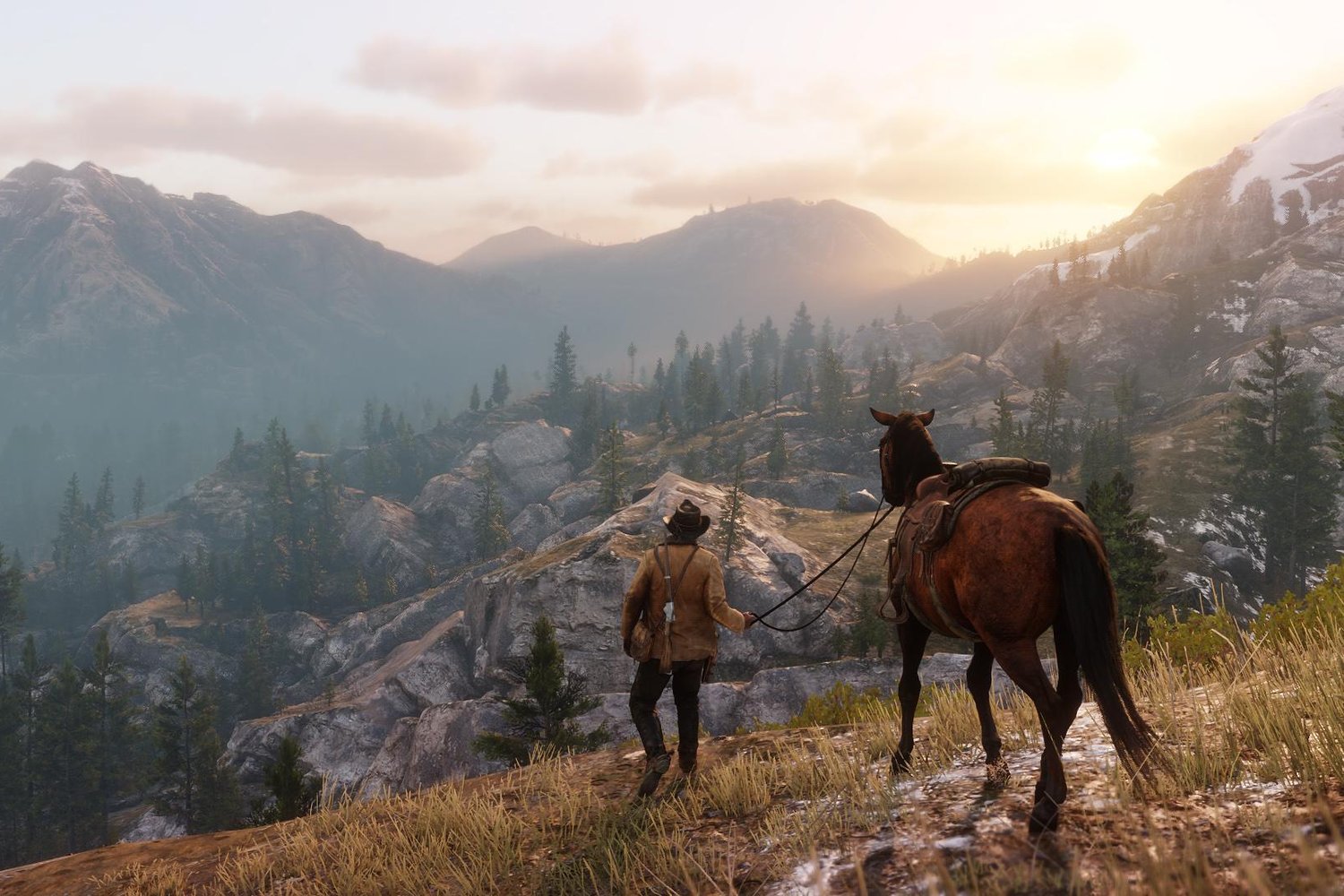 Why ride when you can lead your horse around like some kind of recalcitrant dog?

I did start playing Red Dead Redemption 2. You may recall that I really enjoyed the first game, and was pretty keen for the sequel. I was certainly psyched to see how this prequel played out, and how John Marston would be presented. Would I finally get to see his youthful deadshittery?

Turns out that I’m the same with games as I am with books: I have to be in the right mood for them. For every thing, a season. I just feel that RDR2‘s season is winter. This isn’t because the story opens in a time of snowdrifts, but more because of the piles of real-life concerns that’ve been added – and most importantly, because of the story’s pacing. The game is slow, and while it’s not annoying for me – it’s not a fucking Lav Diaz film, after all – I did feel like summer wasn’t the right time. I’m looking forward to immersing myself in the Western tale when the temperature drops, and I can feel fine about donating the sort of hours this game needs to really live.

(Also, by that time I’ll have forgotten any spoilers that’ve turned up in the recent past.)

In recent weeks, though, I’ve been playing Tomb Raider games: the Crystal Dynamics reboot of Lara Croft’s series. I wrote about my experience of the first game on the PS3, and I think most of what I wrote there still holds true. The PS4 version is considered the definitive edition of the game, and it looks wonderful. I spent a lot of time thinking that the game was a lot easier than the first time I played it – but then I got to the river rampage section and the continual restarts reminded me that the game did have some difficulty spike issues.

I’m still playing my way through the second game of the series, and I’ll probably write something about it when I’m finished. I’m roughly halfway through, and am enjoying the shaking up the devs gave the core mechanics of the game. It’s fun, and the lands are bigger. It’s also a bit harder on the main character: she’s seen as a coloniser, an interloper. It’s slight criticism, sure, but it’s important.

So that’s where I’m at. Hopefully I’ll write some longer, more thoughtful pieces on games next year.