This, the third volume of excerpts from the gourmet manga’s run, follows the previous entry’s lead. It gathers together a couple of brief story arcs to present some lengthier stories: about the travails of brotherly ramen restaurant competition, about the perils of the gyōza business and about inter-village rivalry. As usual, the father-son drama between Yamaoka and Kaibara is part of the overarching structure of the piece – both of them gifted and both of them stubborn as fuck. 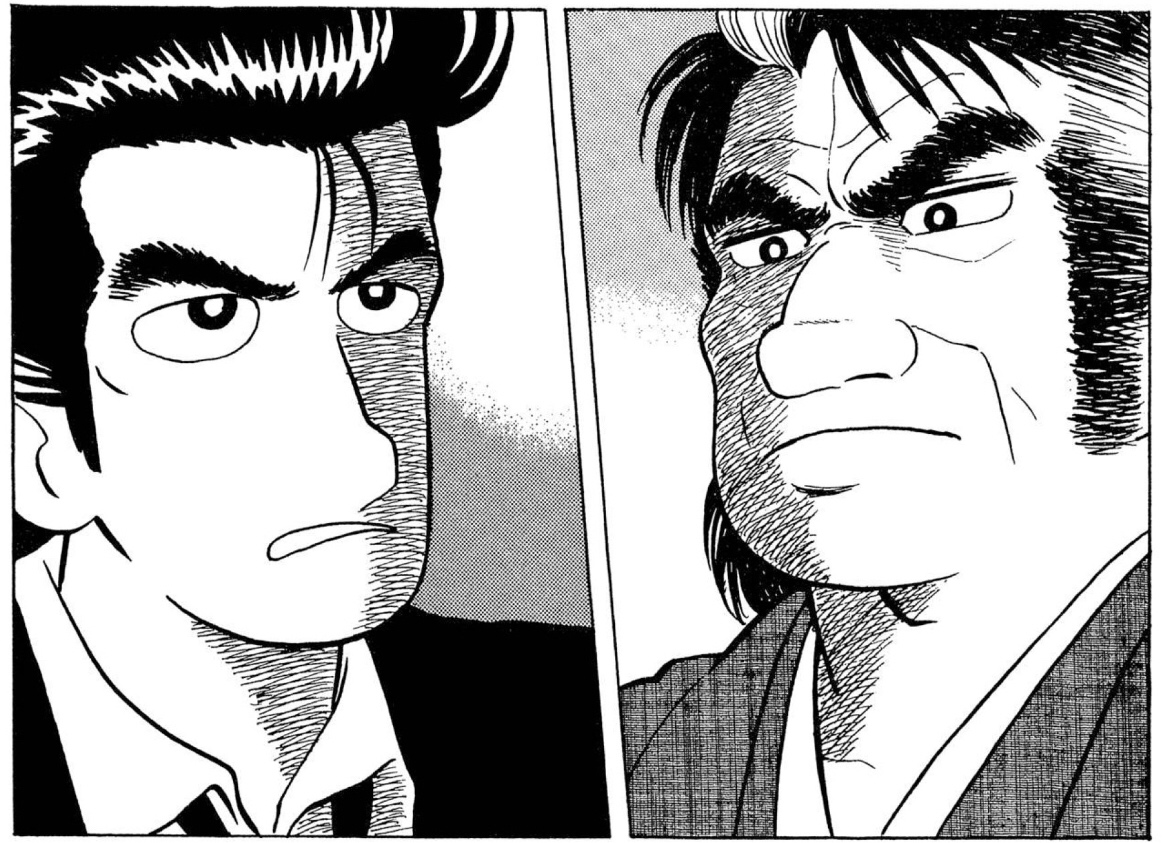 So, the level of glaring and fuck you, buddy that you’ve come to expect from the series does not diminish in this outing. It’s there in spades. And with it goes the microscopic knowledge of food each man possesses: you’ll learn more about simple foods in this series than you will in most cooking shows, let alone comic books. It’s remarkable the level of education that occurs via osmosis with Oishinbo: I certainly feel like my culinary skills have had some sharpening thanks to what I’ve read here. 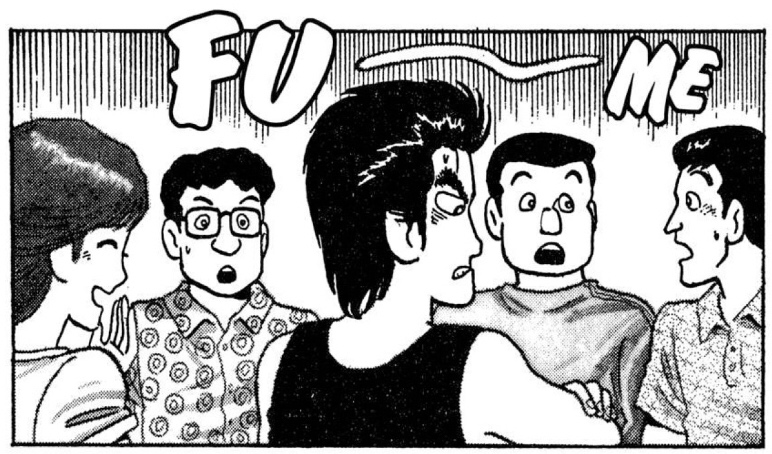 There’s the usual tripping between simple line work and detailed representation in the manga’s art style. There’s comical individuals, brief versions of portraiture. And then there’s almost technical drawing-level representations of the preparation of gyōza. It’s a juxtaposition that works: with too much detail in your face the whole time, the narrative would be cloying: this way, it’s a pleasant sidebar. 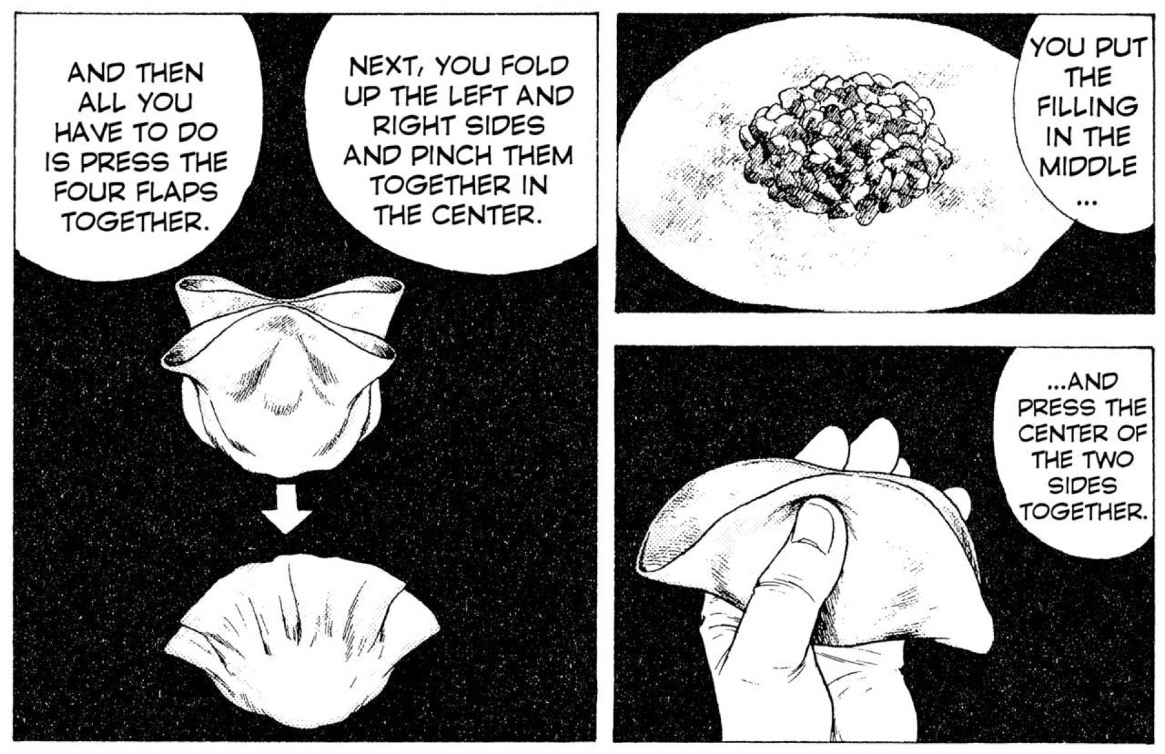 I’m still crap at it.

What’s interesting about this volume is that it offers another look at the nationalism that’s been covered in previous entries. But here, it’s much more sympathetic. Perhaps it’s because gyōza originated in China? This volume shows more Chinese characters than the others thus far have done, and they’re presented at one point particularly as far as it relates to Japan’s relationship with China. This is, obviously, a delicate subject. So it’s refreshing to see, in place of the chest-beating nationalism that’s appeared before, a move towards accommodation of the desires of another. The idea of using the Chūgoku instead of an earlier, now offensive name for China might be a simple thing, but being flexible in this regard is presented as a boon, and something people should should do. It’s also something that probably pisses hard-liners off a bit, so it’s refreshing to see it voiced here. 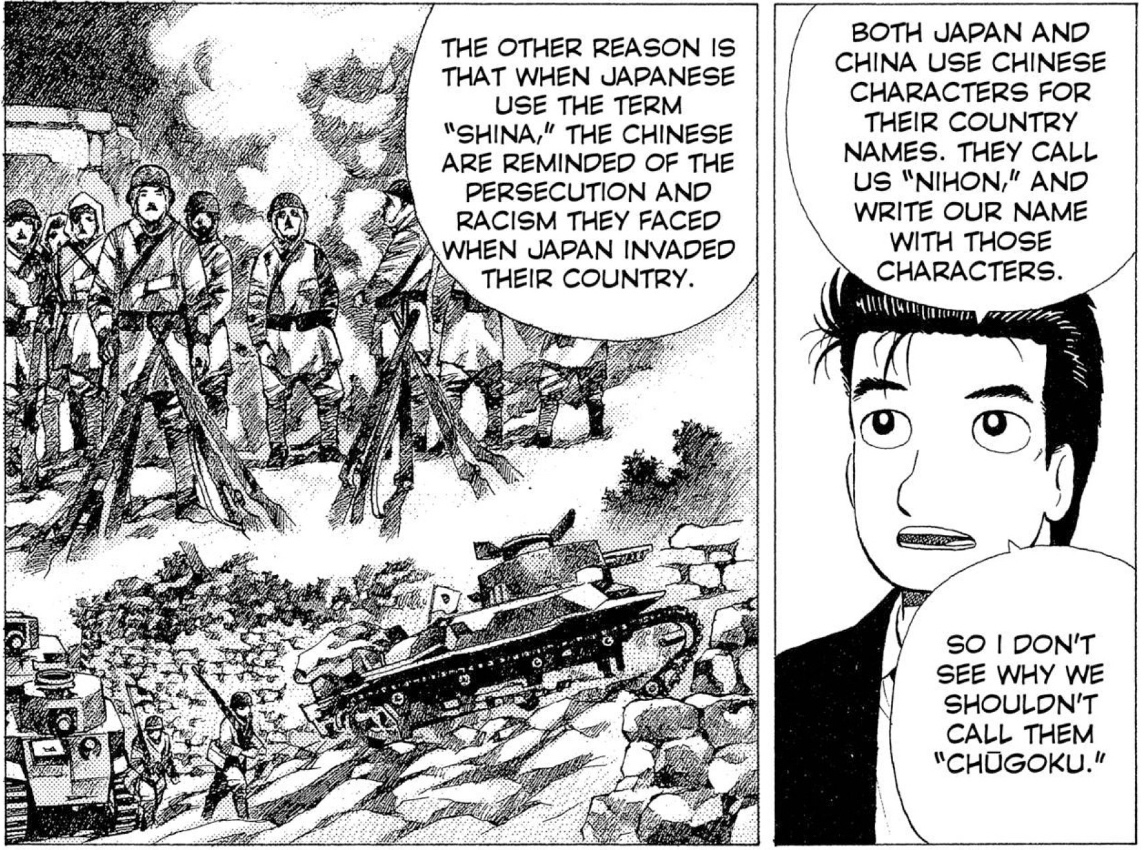 I hadn’t expected this, but was happy to see it..

This is not quite as gripping as the previous volumes – and I don’t feel it’s quite as technical as the sake tome, for example – but I liked the way the stories moved, and the way some of the encounters inside those stories revealed more of the characters’ motivations and personalities. This is a series that I suspect will have a pretty high benchmark: it may not hit the heights that the reader experienced in the initial encounters, but it’ll still be a satisfying visual meal nonetheless. 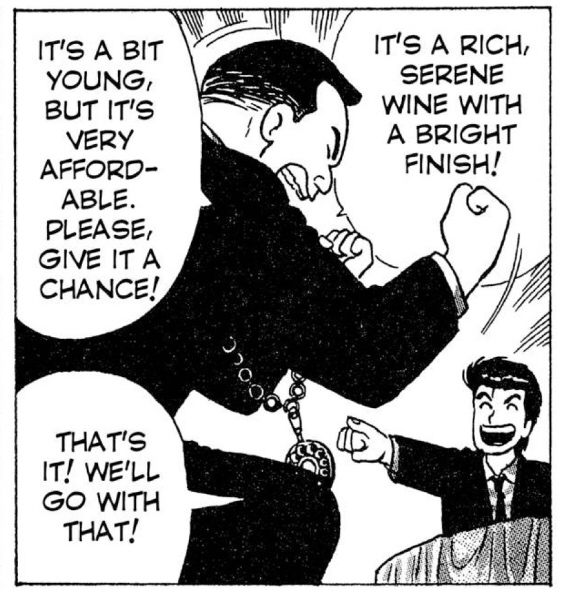 OK so he’s only tangential to ramen (but features in an arc about it) but this guy’s enthusiasm is OFF THE CHAIN.