I’m pretty surprised that the Masterchef crowd haven’t latched onto the long-running Oishinbo (The Gourmet) the way they’ve put boots on the ground for Gourmet Traveller. Perhaps it’s because there’s a loud-mouthed character in this seinen manga who’s perfectly willing to underscore their lack of culinary knowledge, rather than to foster their kitchen fantasies. 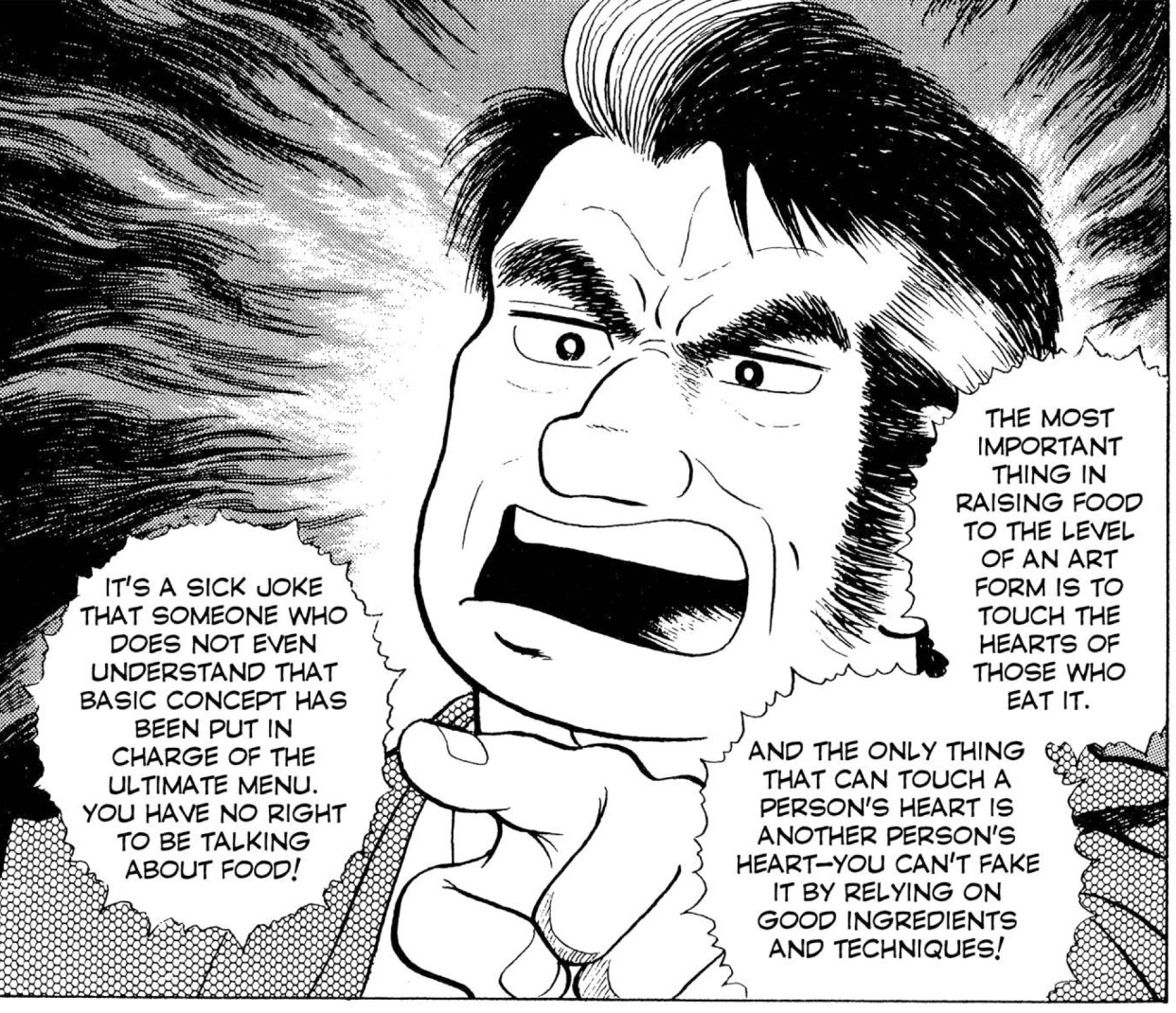 ALSO YOUR MOTHER ALWAYS HATED YOU.

That’s Kaibara Yuzan. He’s a gourmet, runs a gourmet club, and though he’s based on a real person (Kitaōji Rosanjin, so badass he rejected the idea of being made a Living National Treasure) he’s inhumanly perceptive where food is concerned.

He’s also an inhuman arsehole. See, Kaibara has a son who’s a journalist. And he’s split from his father over both work – son Yamaoka is working for a rival on an Ultimate Menu -and over the fact that his father was so demanding about having food made to his exacting standards that his mother died. 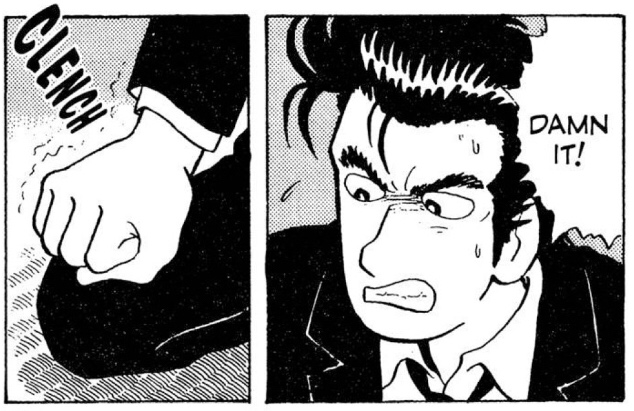 A clench speaks one thousand words.

So, there’s a lot of high-quality cuisine, and a bunch of high-tension meetings between father and son at foodie events. There’s a lot to be said by the heavy lifting done by the word GLARE in this series, or the amount of expression relayed by a clenched fist. Considering the subject at hand is food, it’s deliciously and appropriately hammy. 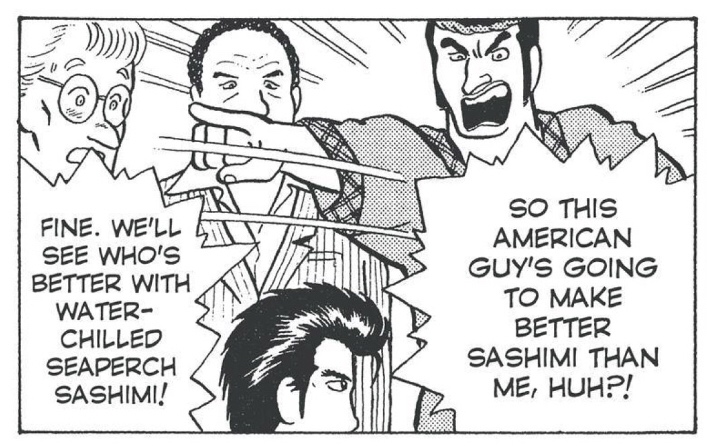 Not so hammy but always looming is the concept of behaviour in society: Yamaoka is always counselled to keep calm, to not make a scene. People lament their lack of knowledge. The idea of being embarrassed by another’s actions, or by their inability to apologise. There’s a strong thread of appearances and what’s right both in the wider world and the kitchen at play, and it creates some subtler currents through the work than I’d expected. 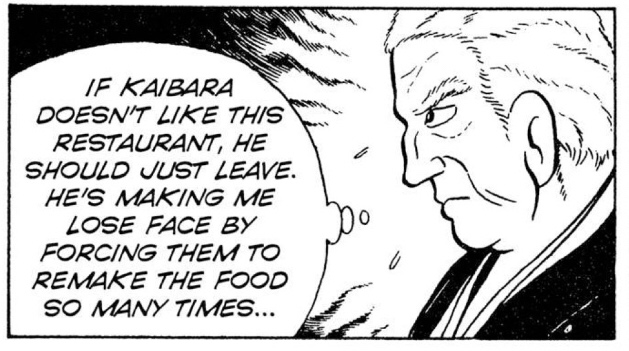 How to ensure nobody takes you out for dinner again, unless you’re the head of a gourmet club.

This volume is the first of seven compiled by Viz for English publication. It’s presented in traditional format – right-to-left reading – but there’s a key difference in the way the book’s been structured. Rather than take the typical manga-in-English approach of trying to present a whole run of a title, each volume is a compilation, a gathering of relevant stories from throughout the work’s run, roped together under ideas. This first one covers the idea of Japanese Cuisine as a whole, so serves as an introduction for a key concern of the work: what is Japanese cuisine? Is it an approach? Can you quantify it? Can foreigners get it right? Other volumes cover sake, noodles, vegetables and so on. So what we’re presented with, rather than a straight narrative line, is a degustation of appropriate stories. 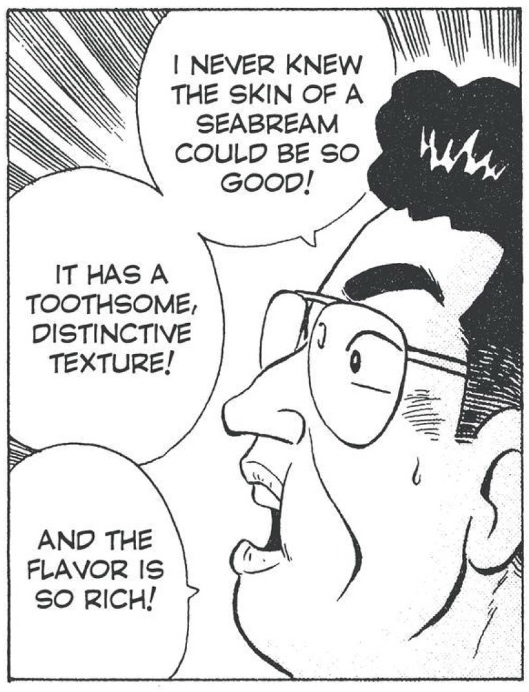 Initially, I was surprised by this. I didn’t really figure it out until I read elsewhere that this was how the books had been compiled. This explained the spoilers present in the dramatis personae of the volume, at least. But it’s a neat way of presenting snapshots in the characters’ lives, particularly given that the work’s overarching story – the adventures of a culinary journalist – aren’t exactly thrilling. But what does hold my interest is the way information is dripfed to the reader: lots of ephemeral cooking secrets are passed along in a way that doesn’t seem particularly showy or shoehorned in. It’s neat (and nerdy) and proves that sometimes attention to detail can stand in for overarching narrative. 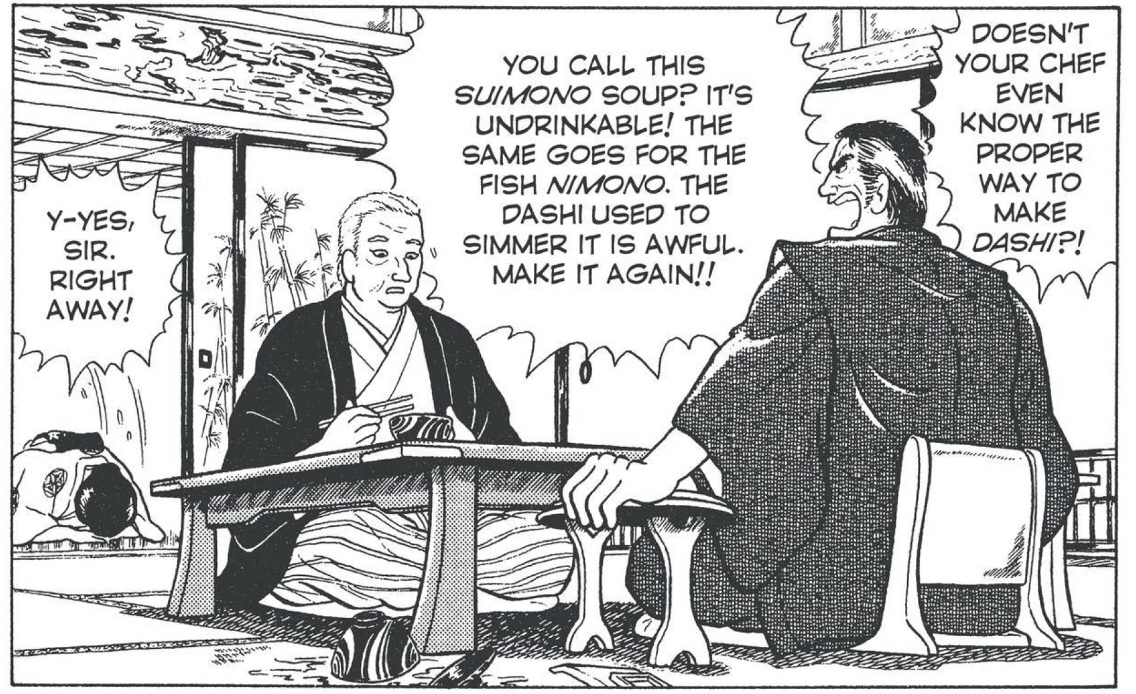 The art is surprisingly detailed in places. Elsewhere, Hanasaki Akira’s linework is more straightforwardly comical – big curves and the simplicity that’s associated with some kinds of manga – but when it comes to food, precision rules. There’s something refreshing in seeing comical characters – a quiff and a black suit for Yamaoka – set against painstakingly rendered foodstuffs. 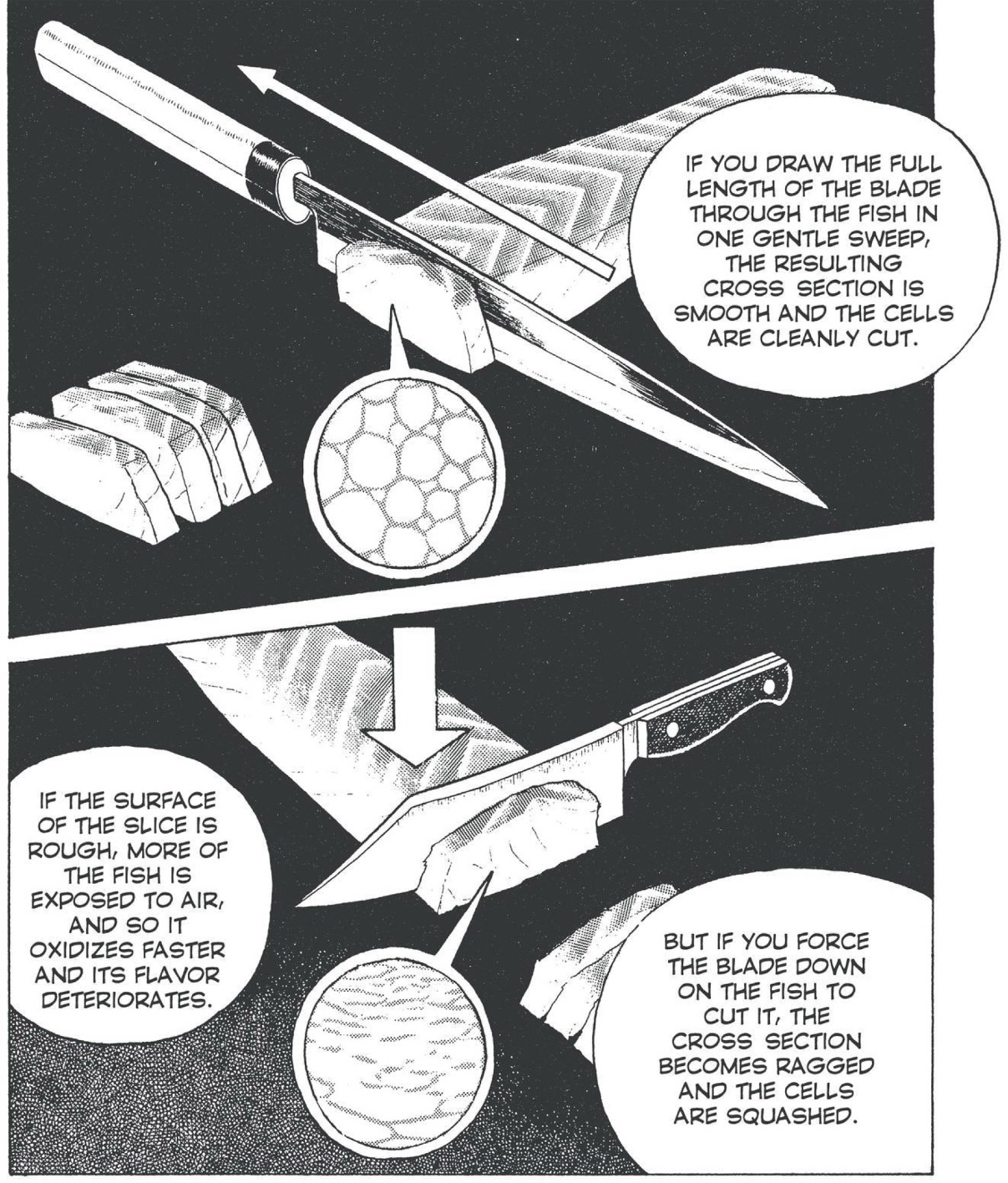 This is still beyond me.

I don’t know how well I’ll go with another six volumes of the same thing. Probably about the same as here: I love Japanese food, and the nuggets of info dispensed here are reward enough. Will the Ultimate Menu ever be finalised? Eh, who cares. Will I continue to learn cool stuff about food I’m too inept to cook? Most definitely. 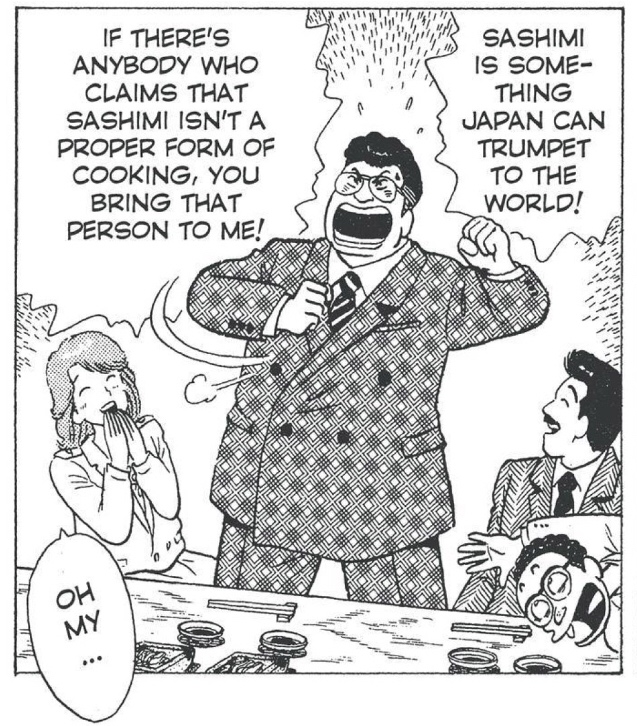 BEHOLD THE SASHIMI PROTECTOR IN HIS SUIT MADE FROM EARLY MACINTOSH FILL PATTERNS.

Good enough for me, then, to have some more.