The Penguin Book of Oral Poetry edited by Ruth Finnegan.
My rating: 3 of 5 stars.

Just a short review, as it’s almost impossible to adequately review anthologies of poetry, I find.

First, this took a long time to read – almost two years on and off – because I found I couldn’t inhale whole tracts of it at a stretch. It’s probably best used as an occasional thing, as something you dip into when the mood strikes. I think it’s probably doing a disservice to the cultures covered to whip through all of their inclusions in one setting, anyway. 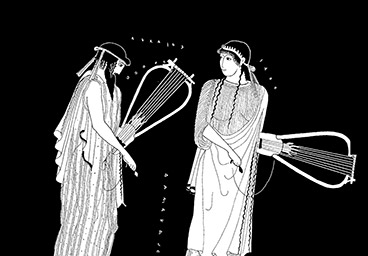 Two verses and THEN the solo, right?

There’s a lot to discover in here across the cultures covered, but I found it difficult to read the book without wondering how much colonialism and empire-building had informed the choices of what was included. While there was a neat description of the cultures covered at the heads of their chapters, I was always wondering if there was a better selection of work I could be reading, curated by someone of the cultural group in question.

(That’s not to say Finnegan’s curation is bad – there’s a lot of stuff in here, ranging from the trivial to the epic – but I wonder if her view of the source would be the same as a native speaker.)

I also wondered about the translations. I suppose this collection is a bit old now – Woody Guthrie and the Beatles are stand-ins for the English part of the book – so it could be that some of the renderings are dated, too. Think of it this way: a lot of Russian literature gets a bad rep because of how dated the translations are. Modern – or more sensitive – translations breathe new life into works, and I suspect that could be the case with some of the passages here, which lurch towards the scholarly or the stultifying.

Still, it’s good as a sampler of important works that you most likely haven’t come across.