If you’ve read my review of Yakuza 0 you’ll have an idea of what’s going to happen here. There’ll be a super-serious take of crime and redemption, a bit of Japan emulation and a whole lot of hitting dudes in the face with those rotating signs from out the front of restaurants.

Kiwami is a remake – of sorts – of the first game in the series, 2005’s Yakuza. This is a game I discovered in my PS2 days, and played through twice even though I knew very little about Japan (or indeed, the yakuza) at that point. I had no idea, even, how deep the game could be – how many side missions there would be, or how many different mechanics were at work in the thing.

The process of creating this version of the first Yakuza story is a bit different to the usual round of console remasters. Rather than just updating the resolution and textures (as per the Bluepoint Games remasters of the first three Uncharted games) the dev team have also tweaked bits of the original. There was a Japan-only remaster of the first two Yakuza games for the PS3, but Kiwami is the full business: there’s extra bits in this version that tie the recently released prequel’s action more closely to this. It’s sometimes a bit clunky, but hey, it works.

In addition, the game has been retranslated – or rewritten, really – from scratch. The level of attention the 0 script received is present here, and the game benefits. Ideas are more fulsomely presented, and personalities come through a lot more effectively. (Which is a good thing, considering how terribad the English dub in the PS2 original was.) There’s some content cut – a couple of hostesses, and some gambling? – but given the amount that’s still in here, I’m not particularly concerned, as it’s still better than the PS2 version.

(Even better? It’s cheap: launch price was about $50, while it’s regularly on sale on the PSN for under $20. This is the way to reissue games. )

This video, while long, shows a good amount of the differences between the two versions of the game.

The story is pretty standard gangster fare. You are, once more, Kazuma Kiryū, a lower-tier (but rising!) yakuza who’s loyal to the family, and the leader who raised him. But there’s a hitch. His dickheaded blood-brother Nishikiyama offs the family patriarch, and Kazuma takes the heat – and the prison time, and the ignominy of being drummed out of the family.

Now, he’s back. And it’s time to try to get a new life together. And avoid being killed by clan men out for revenge. And to look after a little girl who’s just looking for the same woman you are. And to eat virtual ramen and beat up neck-thrusting hoods, because as ever, this is a game which is happy to let you explore its scaled-down Tokyo for as long as you want. 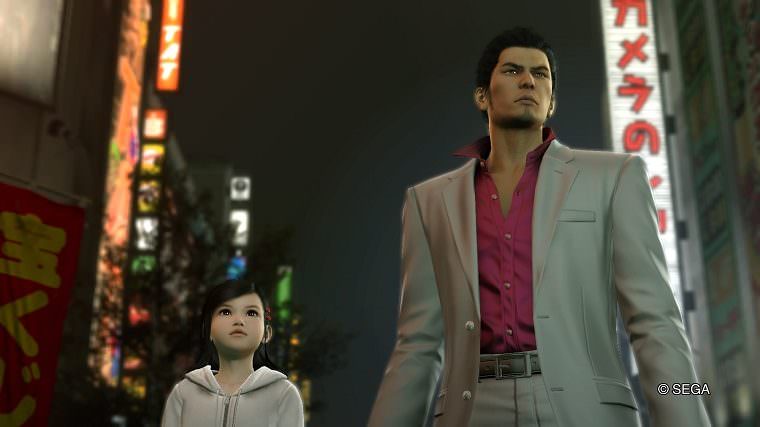 It’d be a fool’s errand to ask this dude to avoid kicking seven shades of shit out of randoms while a kid’s around, but give it a go.

The main story is always there, but Yakuza Kiwami doesn’t push you to follow it. It’s just as content to let you fight your way through a bunch of kids in a sexy lady-beetle card game tournament, or attempt to drink the bars dry, or learn to fight like a homeless drunken master. Would you like to chat up hostesses? Or collect locker keys so you can access ludicrous weapons? Complete side-stories where you somehow decide a “wrapped magazine” is the best thing for a tween girl to give to her slightly older friend? Go for it: it’s what this world is for.

(I don’t want to say too much about the story, but suffice it to say that you’ll end up in a shirtless battle on top of a skyscraper, so let it never be said that the game avoids the chance to bung in OTT set pieces.)

A mechanic that’s new to this version of the game is the Majima Everywhere system. Majima Goro – our favourite eyepatched nutjob – now plays the role that those bigger enemies played in 0: a kinda-sorta boss fight that occurs relatively randomly. He pops up when you least expect it – well, until you learn his haunts – and is never creepy at all.

No, never. Though at least he’s not dressed as an idol here.

This time around, he’s not just beating the shit out of you, though. He’s teaching you. You see, he really wants to have a fight with you – the inference is that it’s a boner fight – but won’t be satisfied until you’re back at your pre-prison best, so he’ll continually crop up until you’ve fully learned how to be the Dragon of Dojima once more.

(To be fair, his role is pretty good: after handing you your arse initially, you become more able to deliver His Smugness a smackdown with ease thanks to increasing abilities. There’s a good sense of your powers for arsekickery returning, so that by the end of the game you’re ready for the endgame’s ridiculous battles.)

The fighting system doesn’t seem as solid as in 0, but it’s been worked on from the PS2 release. Majima’s animations seem to have a lot more unbreakable elements than other foes, and I found myself irritated when pulled into a Majima Everywhere battle, on occasion, but it wasn’t ragequit-inducing. (That credit goes to the perversely obnoxious on-rails car shooter section, which still grates even though it’s been improved from the PS2 version.) 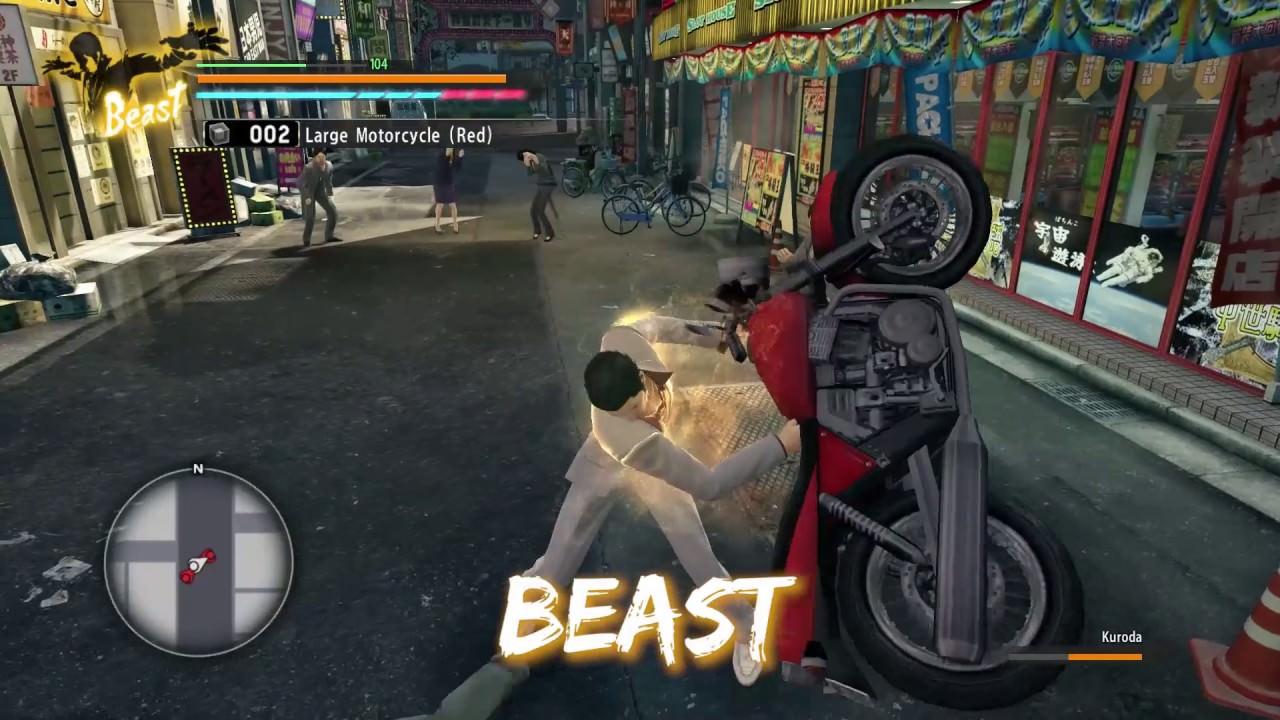 There’s a lot of fighting, though, and it’s mostly pretty fairly handled. There’s an underground arena that unlocks later in the game where you can test your mettle against some ridiculous beefcake, but most of these can be bested with a little perseverance.  There’s not a lot of profit in button-mashing, so there’s a distinct feeling that combos and tactics actually work here.

Is the game better than Yakuza 0? No. But that’s hardly surprising given that that game is the result of a lot of refinements made over the course of a whole series of games.  Compared to Yakuza 0, Kiwami is a little short, a little limited. But there’s no feeling of paucity: there’s a lot to do, and even in my 70-odd hours, I didn’t complete all the tasks required to absolutely win all the trophies. (Largely because I can’t be fucked playing endless arcane gambling games in order to beat the house.) You can probably whip through the story itself in about eight hours, maybe – and it is a pretty great story, with all sorts of great crime-film backstabbing and intrigue – but if you take time out to explore the neon darkness, you’ll find yourself staying longer. 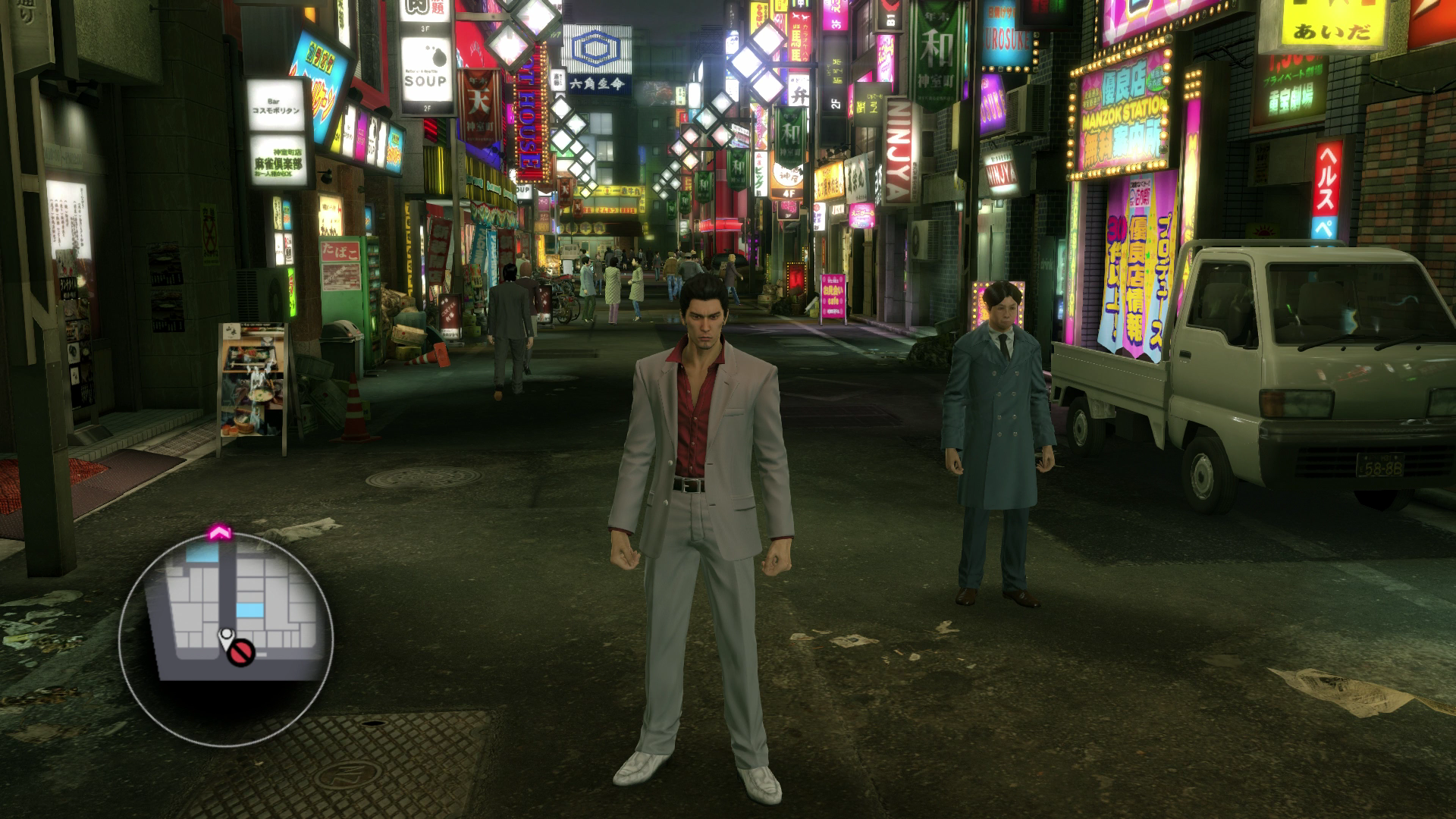 The night is young. The city is yours. The shoes are terrible.

Let’s face it, given the beguiling nature of the nocturnal world created here, there’s a good chance that I will (for the fourth time) return to Kamurocho. You should pay a visit, too.