How do you review something like Don Quixote properly? I mean, something that was written four centuries ago, and is a cornerstone of Spanish literature. It’s one of the earliest novels, deals in knighthood and class, and is something I’ve lugged from country to country over the past 20 years because I never seemed to be able to donate enough time to it.

Well, I’ve now finished it, so I’ll give reviewing it a shot: Don Quixote is a pretty good, earthily rendered cautionary tale of how reading chivalric romances leads to elder abuse. It also features more people vomiting on each other than you’d expect from a classic of literature.

(That possibly counts as a spoiler. There may be a one or two more in here, but I wonder if it’s possible to spoil a work that’s four centuries old. Proceed at your peril.)

The story is a simple one, that unfurls into strangeness and flights of fancy – or gullibility, really – over the course of a thousand or so pages. Alonso Quixano is a noble who’s read too many chivalric romances, which has led him to believe his job is to revive chivalry in the world and thus must head out into the countryside as a knight errant. It seems a pretty loose basis for a career change – a bit like reading too many bodice-rippers and becoming a dashing-but-boneable highwayman? – but let’s go with it. Anyway, he soon recruits Sancho Panza, a farmer given to shirking work and mixing maxims, and the two lair around the place, Having Adventures.

(Oh, the windmill part? The bit that everyone knows about the story? In the scheme of the whole work, it’s tiny. And it’s surprising how quickly that part of the story comes and goes. It’s a great image – ha ha look at this idiot tilting at windmills! – but it’s not a particularly large part of the book. I’d spent so much time believing that the windmills were a key component of the story that when they came and went – they’re indicative of Quixote’s madness, but then so is almost everything else here – I did the book-reading equivalent of a double-take. But trust me, there’s so much more in here that they weren’t missed for long.) 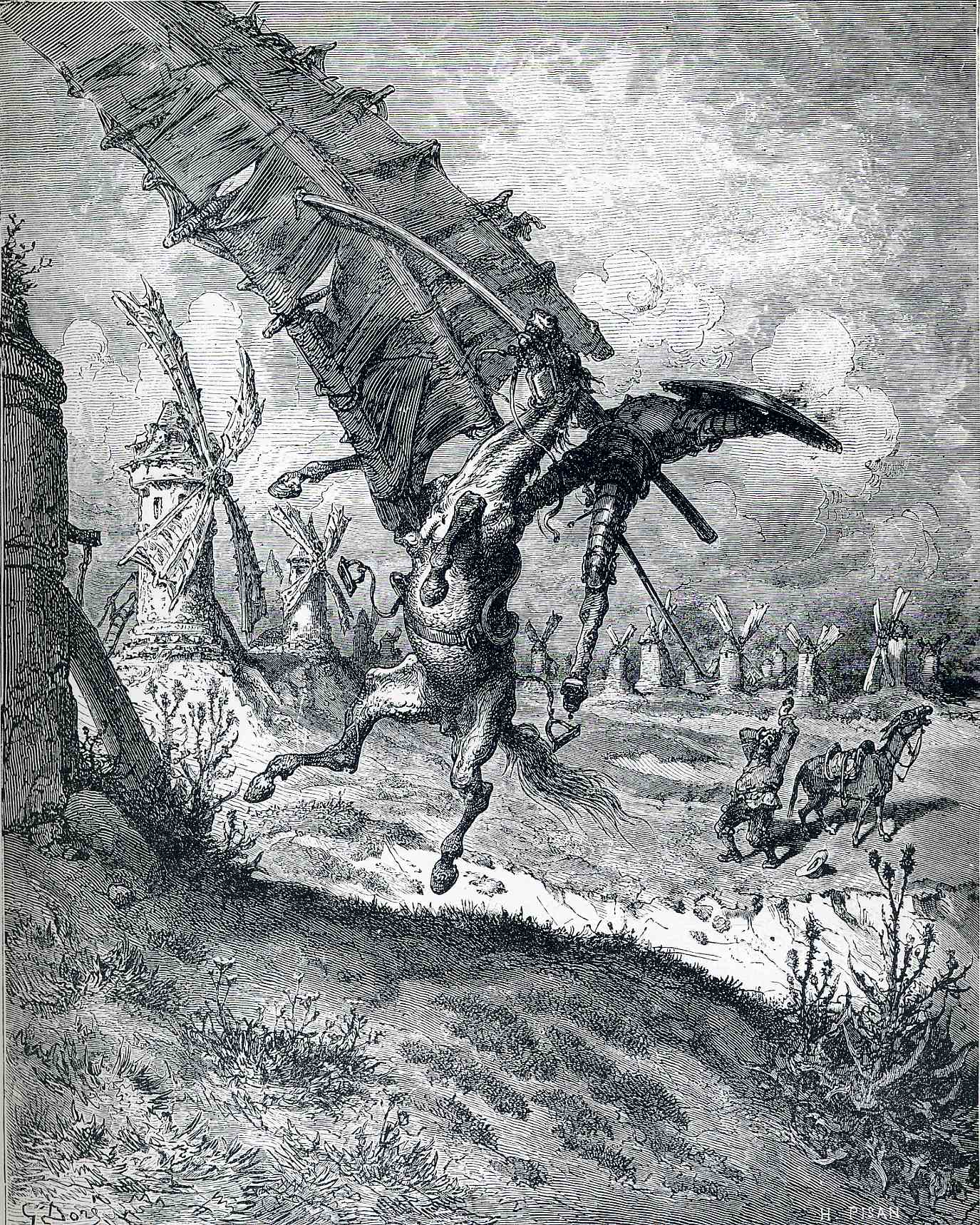 I DON’T THINK THIS IS GOING AS PLANNED.

The two are both endearing and awful. Quixote is clearly delusional and quick to challenge for perceived slights, but is also misguidedly noble. Sancho is a slacker on the make, but also disarmingly loyal. There’s a lot of funk on these two, but the way they’re treated by society is worse. Hardly a moment passes without an outsider beating the shit out of the pair, or making fun or taking advantage of them. It’s not just roughnecks in on the joke: royalty seems to have nothing better to do than to fuck with our two heroes. Sure, there’s an element of the holy Fool about Quixote – Sancho’s just along for the ride, hoping for rewards – but the maliciousness of the community is pretty awful.

The story ranges all over the shop: there’s tricks and lost loves. There’s beatings in inns, trips to galleys, family reunions, governorships, arrests and rewards. There’s deceptions and farce. And then there’s some neat textual tricks. Cervantes plays with the idea of the author: according to him, the stories come from “The Archives of La Mancha” and (mostly from) translations of Cide Hamete Benegeli’s Arabic texts. Now, this Benegeli is a made-up guy, but he exists to provide a feeling of veracity, to establish that Don Quixote is A Real Guy. This in turn leads to a sense of self-awareness: the characters are aware of the book detailing their adventures, as well as a “fake” volume of same. It feels surprisingly modern in places, which was a shock. But really, everything hinges on comedy and tragedy: and Cervantes likes to switch them without much warning.

The thing that struck me the most was how shocking the end of the story was. Don Quixote, duped by apparently well-meaning neighbours, is convinced, having lost a bout, that it’s his chivalric duty to sequester himself for a year. He talks a little with Sancho about maybe becoming shepherds for the duration – and then he becomes ill and dies. I find it hard to believe that this section of the story is meant to be taken as anything other than the death of hope. It’s poignant, for sure: though Don Quixote was a sham of a knight, he was in earnest – and when that is taken away from him, so is his will to live. It’s a testament to the importance of passion to survival: without our passions, we’re nothing. 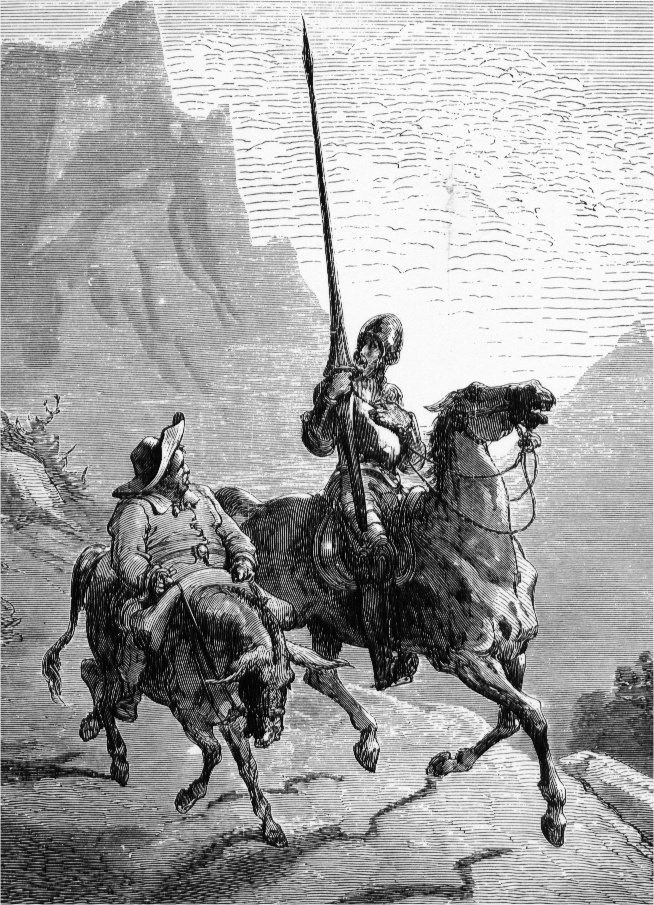 Rocinante, you can cut that prancing shit the fuck out.

I came to really enjoy Don Quixote, though I did find reading it was often a bit like treading water. It’s true, the work requires you – even in new translations – to work for enjoyment. That’s fine: Chaucer isn’t something you can leap into cold, either. But often it felt that narrative stood still for large chunks, unless the point was immediate humiliation. It’s an oddly-paced work, but this is part of the conceit of presenting fiction as fact: chapter headings started to appear as if they were the text talking to the reader, as if the pages were from a sentient encyclopedia rather than a knightly tale. It’s not particularly difficult to read – John Rutherford’s translation is wonderfully earthy, giving Sancho especially an excellently blokey turn of phrase – but I did find myself taking much longer to read it than I would’ve thought.

Don Quixote surpassed my expectations, largely because I didn’t know what to expect, other than windmills and broken-down horses. It’s a lot sadder than I had imagined, and a lot crueller, too.

(I’m not sure I’ll heed the warning about giving chivalric romances the boot, mind.)