It’s a nice reminder: two guitarists busily strumming away is a jam; a hundred playing for dear life is a fucking movement.

That quote is something I came across a couple of days ago. It’s Tristan Bath writing in The Quietus about A Secret Rose, a piece by Paris-based composer Rhys Chatham. The whole review is worth reading because it bears some resemblance to a piece I took part in, A Crimson Grail.

As Malcolm Young would have said, hit the bugger!

The piece, performed as part of this year’s Sydney Festival, is pretty enormous. An antiphonal piece, it generates a huge sound – though not as loud as you’d assume – with elements passing around the audience, who sit in the middle of the performance space. Players can’t really get a sense of how the whole works – not the way the audience can – because they’re so close to their particular section. But for those in the middle, it’s epic, to say the least. END_OF_DOCUMENT_TOKEN_TO_BE_REPLACED

I suppose it’s the case that there’s no such thing as a bad PJ Harvey show. But it could be that there’s such a thing as an indifferent one. One that hits the right notes, but doesn’t have the emotional resonance you’d expect. 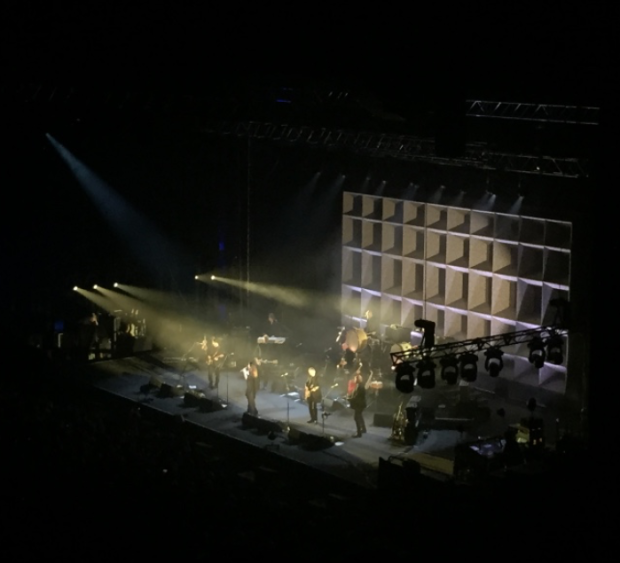 That was the case this evening. It wasn’t phoned in – not by any measure – but there was something curiously distancing about this evening’s show.  END_OF_DOCUMENT_TOKEN_TO_BE_REPLACED

I made a trip to Carriageworks this evening to check out percussionist Bree van Reyk‘s new project, part of Performance Space’s Liveworks Festival of Experimental Art. The Festival runs for a couple of weeks and features experimental art across a range of disciplines; while I was there I saw a dance and video piece about drones and surveillance.

I was there, however, to see Wall of Sound, which is part of the Festival’s series of free events. Van Reyk has described the event as “solo me, solo you, solo gong”, and it’s pretty apt. It’s a one-on-one situation, two people and a sound. END_OF_DOCUMENT_TOKEN_TO_BE_REPLACED

Last Saturday evening I spent a little over an hour watching two percussion ensembles perform at Sydney’s City Recital Hall. It was the culmination of a couple of years of joint study and development between Sydney’s Synergy Percussion and Korea’s Noreum Machi. This show was the last of the tour, with the Korean trio set to fly out the next morning, so I was interested to see how the two would come together. END_OF_DOCUMENT_TOKEN_TO_BE_REPLACED

Disclaimer: I learned taiko with members of TaikOz for a number of years.

It’s taken a while to write this. I’ve felt conflicted, as I am a TaikOz tragic and want them to succeed and grow – but I’m also a gig-goer with limited time and limited cash. And I like to spend my time (and money) accordingly, and to feel some kind of reward – not always in the form of back-slapping woo-consuming-arts! kind of way, either – for the investment of both.

Unfortunately, the Future Directions gig was one of the poorest shows I’ve seen from the ensemble. There’s been member injuries to contend with – artistic director Ian Cleworth was not on stage – but I feel Kaoru Watanabe‘s guest artistic direction didn’t provide enough cohesion to the performance to pull it off. END_OF_DOCUMENT_TOKEN_TO_BE_REPLACED