100 Bullets: The Deluxe Edition Book I by Brian Azzarello and Eduardo Risso.
My rating: 5 of 5 stars.

What would you do if you were cornered by a craggy-looking dude with a briefcase? A briefcase that’s meant for you? A briefcase that contains some papers, a pristine gun and a number of untraceable bullets? With the assurance that anything you did with those items would be completely free from legal consequence?

(I mean aside from whacking your most hated YouTube celebrity repeatedly.)

Well, you’d probably at least hear out what he had to say, right? Especially if it concerned, oh, some kind of incredibly traumatic event from your past and offered you the ability to experience real closure instead of a festering sore of uncertainty. 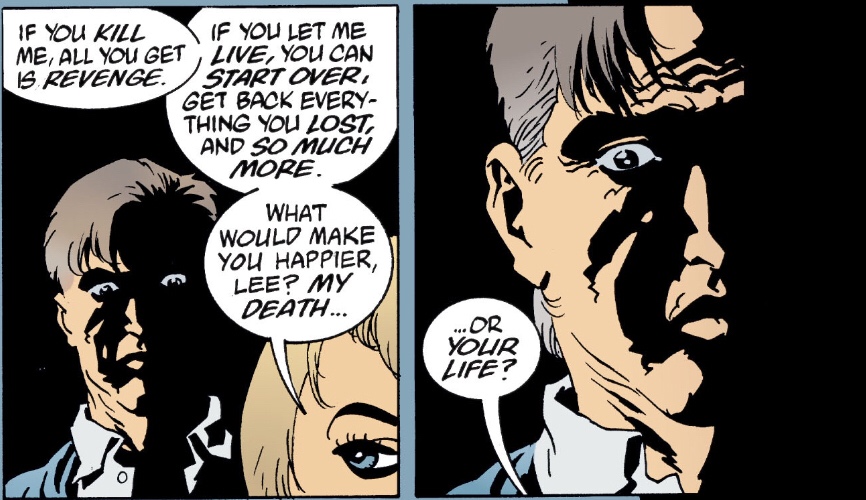 Though we both know it’s never that clean cut.

Welcome to 100 Bullets. And to the exchange that is the entry point to a multitude of stories, each of which adds a layer of confusion to the overall narrative, a smidgin of complicity to the conspiracy. 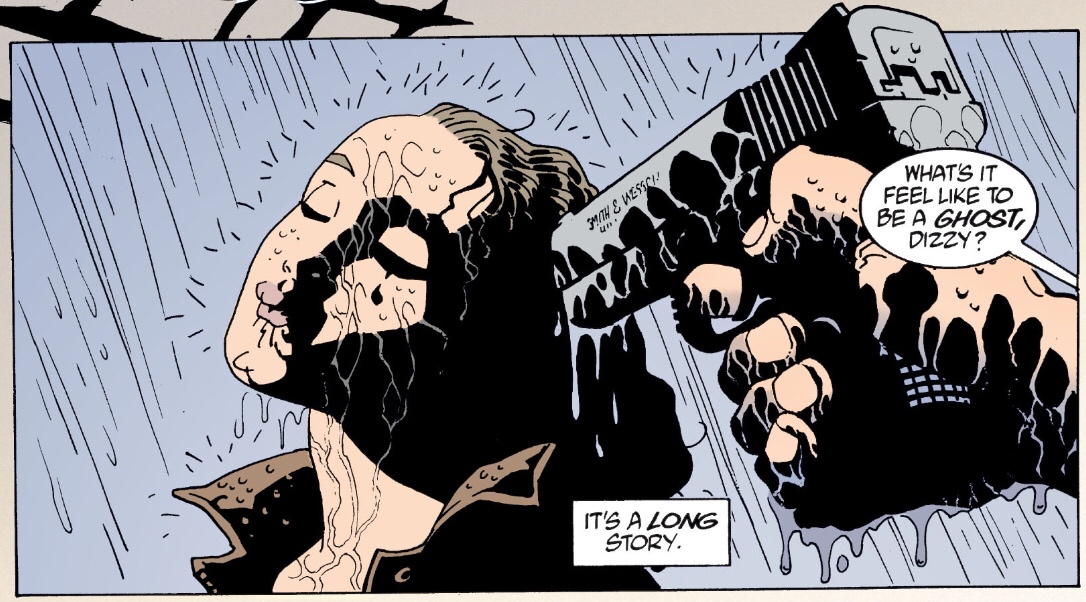 Not as great as you’d think.

I decided to put the series on my to-read list this year because I figured I should include a comic series so I wouldn’t feel guilty for inhaling the occasional graphic novel. It’s a series I’d intended to read when it first came across my radar years ago, but I never got around to it. Now that it’s completed (and available digitally in omnibus editions) I figured it was time.

This volume collects the first 19 issues of the run – there’s 100 in total, naturally – and a special short. And it takes the simplicity of revenge as its basis (an eye for an eye – understandable?) and highlights that such an approach is never as clear-cut as one would have it. Because despite how righteous your anger or how justified your fear, how appropriate your planning, life has a way of making things messier than you’d ever imagined.

The story is bleak. Modern noir, there’s a lot of characters you’d generously call low-lifes. It’s a world away from shiny superbros, and has more in common with James Ellroy’s work than anything else. There’s a real sense of darkness throughout the story – which is beginning to open up into a kind of us-and-them interdepartmental Cold War conspiracy type deal – that’s echoed in the art, which presents as a more physiologically-correct version of Frank Miller’s style. You know: darkness, staring eyes. Violence and negative space. It’s striking, that’s for sure – and deeply cinematic. 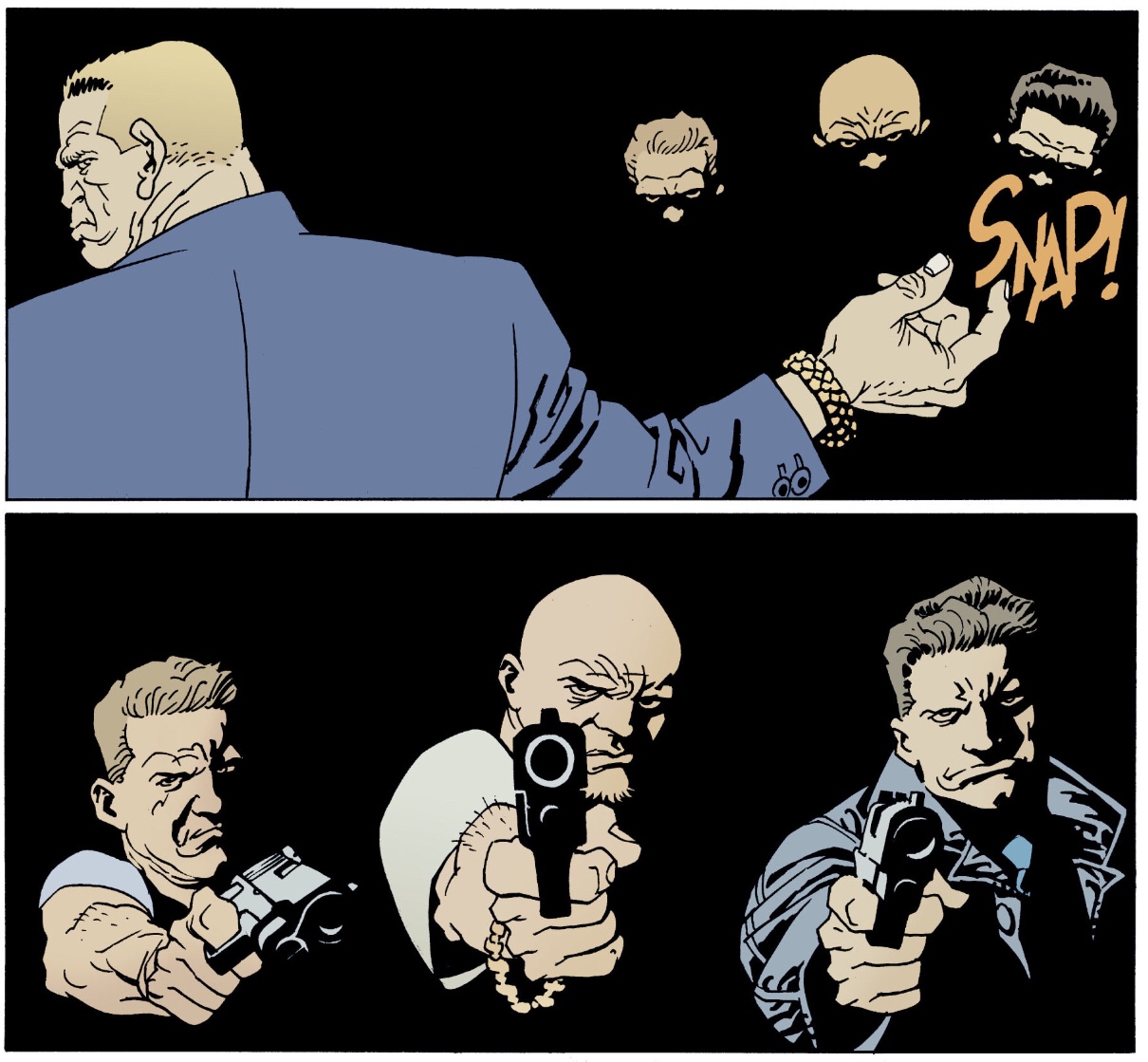 I suspect this will not end well.

It isn’t, obviously, for everyone. There’s a lot of people who’ll be turned off by the grimness found here, or who think it’s too blokey. I mean – it is but there’s the feeling of a light touch at work: the meatheads that tread the stage here are meant to distract you from the real focus of the work: quiet men with briefcases. Blondes with computers. Mothers holding their shit together in the face of overwhelming odds. Survivors. Losers, some. But losers that’ve taken their knocks.

Is it realistic? Yes and no. This is a fantastic, steroidal version of policing, of secret armies and vendettas piled upon each other. There’s a distinctly fabulous air to the overarching conspiracy – the best kind to have – but to focus solely on that is to miss that the stories work best when they focus on small sketches. On individual moments between people. There’s a tenderness at work in the presentation of these assassins, these petty crims, these dogged losers. It’s the bond of lovers, of family, and of death, and the tenuous nature of what holds people together is pretty well realised.

I don’t want to give away a lot of story because I feel this is the sort of thing that’s going to build up to a batshit crazy crescendo, and I wouldn’t want to rob anyone of the ability to experience it for themselves. But give this a go if crime is even remotely your thing. 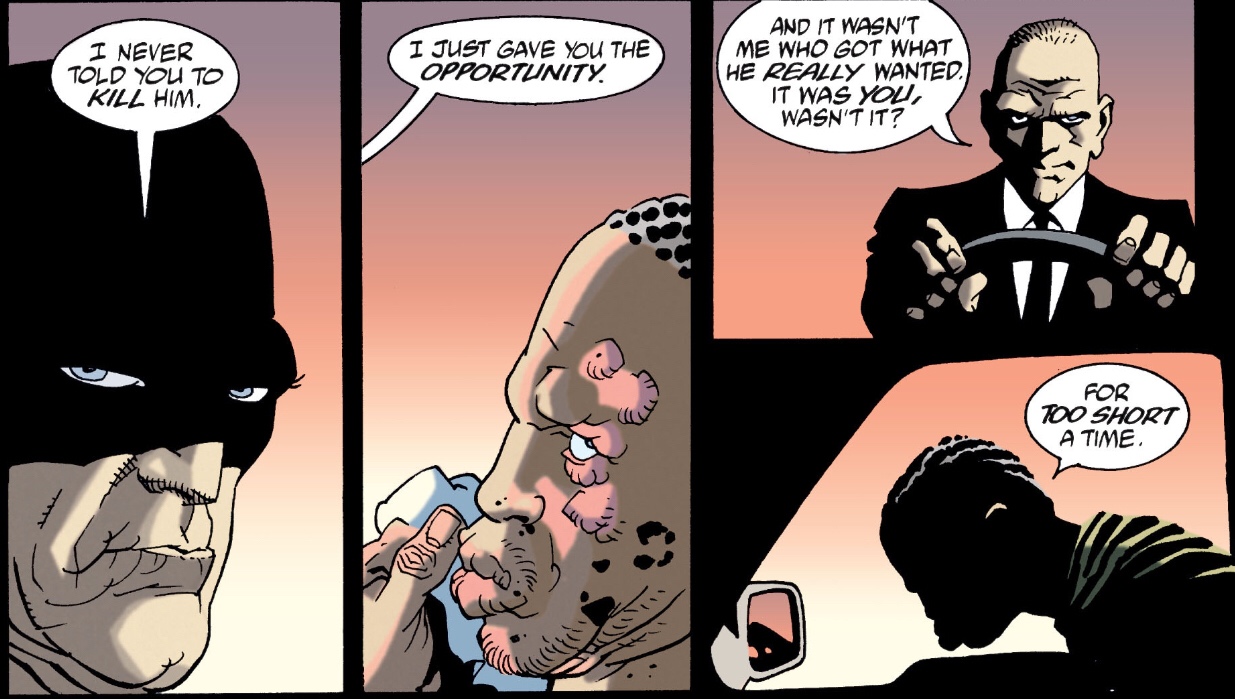 And then think again about what you’d do with the briefcase.