I’ve read the poem before – the Martin Hammond translation in Penguin, and parts of the Fagles/Knox version – and seem to remember that it flew by. It could’ve been that younger me didn’t pay much attention to what was going on, but this time around I found it to be more of a grind. Not an unenjoyable one, mind, just a grind. I think that’s really meant to be the point, though: we’re reading a tale of both a long-lived military campaign and a gods’ pissing contest. It’s meant to be epic and lengthy, and Alexander’s translation certainly conveys this: you’ll have that hour-three-of-Ben-Hur twitchiness before you’re half done.

(There’s more information on the potential differences in translation in this article but suffice it to say they can be large.)

Caroline Alexander’s translation seems to situate the action in a more real-world kind of environment. There’s honorific nomenclature, but everything is grim military action, internecine butchery that leaves nobody unscarred. It seems, to me, to speak more to the ceaseless grind of war than to the heroic and godlike, even though those two types of narrative are still much a part of the story. It’s a bummer, though that’s to be expected in a tale that revolves around the results of a kidnapping, grafted to a titanic pissing contest. It just feels weird for such mythic stuff to feel weighted towards the human rather than the divine.

Ah, the gods. In case the God of War series hadn’t clued you in, there’s plenty here to remind you that Zeus Is A Massive Dick. As is his long-suffering wife, Hera. The Top God’s inability to keep it in his pants and his wife’s inability to let any opportunity for a stoush pass her by mean that the two sides in this engagement – the Greeks and the Trojans – are the stuffed toys eventually worried to death by a herd of superhuman cats. The celestial beings can’t help but fuck around with humans who, it is repeatedly noted, are doing a great job of fucking each other over. 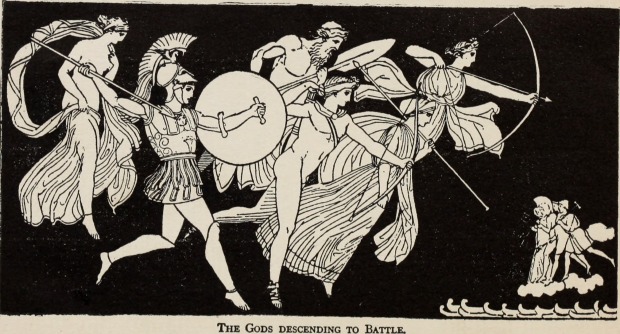 Or you could just stay up there and leave people to sort things out themselves LIKE THEY TRIED TO EARLIER BEFORE YOU STUCK YOUR HALLOWED FUCKING OARS IN.

There’s turns and twists, and ceaseless amounts of family tree retelling. I understand that a lot of the repetition of the work – try counting how many times Thetis’s silver feet are mentioned, say – is a holdover from its oral beginnings, but once you’ve a head of steam up, they tend to bog down the work. There’s an intriguing variety of descriptions of death, but after the fiftieth covering of eyes and unstringing of limbs, it does feel as if the tale is being padded. After a couple of hundred pages, it’s wearing – even though I felt particularly bad when my enthusiasm flagged. I mean, it’s a classic! This shouldn’t be happening, right?

Of course, the secret of The Iliad is that a book review score is completely stupid. This tale informs so many of our others that it’d be a shame if you gave it a swerve. There’s not a lot I can add, really: it’s a classic, and doesn’t fit well on the scale of good and bad. It’s more than that. As far as translations go, this is a pretty good – though perhaps not great – one, and is worth your time. It’s rewarding, but there is a price, and you’ll certainly slog through some parts, but that befits a story that spends so much of its time mired in blood.