I’ve just finished playing a game that’s one of the stranger things I’ve played. It’s essentially an episodic anime with some Nier-like battles thrown in, but the whole thing is strange as hell. It’s appealing, but I spent most of my playtime wondering what the fuck was going on. But I suppose that’s what you’d expect from a game best described as an anger simulator. 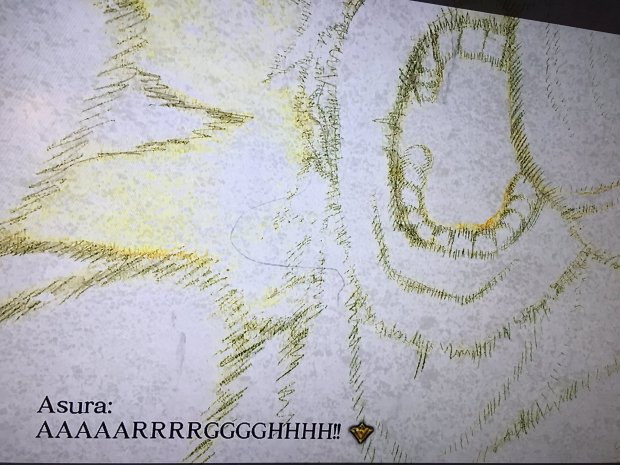 Imagine this for pages and pages.

Oh, did I mention you punch gods to death? And occasionally have six arms? And crawl out of hell on the reg? And can somehow defeat hordes of monsters after your arms have been ripped off? And take advice from a golden spider who sounds as if he’s grooming you? And that you fight robots that look like the Buddha, have tantrums that explode spaceships and ultimately win the game by punching the earth in the face?

Welcome to the world of Asura’s Wrath. If that sounds exciting to you, you should probably play it. Though to be honest, you can have just as much entertainment by watching a Let’s Play of it, I think – at times it feels as if that’s what you’re doing anyway.

The game plays out largely in cut-scenes, with occasional prompts for human interaction. You play (mostly) Asura, a guy with the requisite anime hairdo (excellent hold, despite all weathers, physics, visits to the underworld, etc). You’re one of eight generals tasked with defending the world from the Goma, which are basically enormous evil animals with a red-and-black aesthetic.

The Goma are weird. First, you come across apes, but ultimately you’ll be fighting huge elephants and rhinos who’ll spit fire at you and have curiously visible weak points. Some enemies are impenetrable until you figure where their weak-point is, but generally speaking a whole lot of spamming will get you through. There’s close brawling and distance missile attacks. Ultimately, you have to fill your fuck-shit-up gauge to the point where you can trigger another cutscene and move things forward, generally with some level of rhythm game mechanic.

The difference is that if you fuck up the rhythm game, the game advances anyway. Hooray! It’s nice to know devs take care of the lazy gamer.

Anyway, the idea is that you’re one of the eight, except OOPS it seems that the other seven have heard your daughter has Super Spooky Abilities and decide “aw, fuck that angry dude” and double-cross you, framing you for a ruler’s murder. Though to be fair, you’re the angriest man alive, and you just so happen to have the old guy’s blood all over your hands, seconds after entering his throne-room so hell, they could be right. But regardless, you’re attacked, beaten, and end up dead.

(Dead in this case means hanging off a column over a vast lake, being pep-talked by a mechanical spider made out of gold. Obviously you’re too angry for this, and go upwards and start fighting your way back to your daughter, even though 12,000 years have passed. It’s good to have goals.)

The rest of the game is spent defeating the other generals, who have now elevated themselves to the level of gods. I mean, you’re a demigod at the start (because I don’t think regular generals can stand on the outside of space cruisers and live) but they’ve really kicked it up a notch. They certainly dress the part. There’s a weird aesthetic through the game – it borrows liberally from Hindu and Buddhist iconography and turns those designs into rompin’ stompin’ battle robots.

Oh, and they’re “purifying” the earth by killing people so their souls can be used to fire an enormous weapon that looks like a space-hovering dudegod.

Yeah, I’m beginning to think that Suda 51 isn’t the most random dude in Japanese gaming. Though to be fair, I’d be more inclined to have played this sooner had I known it involved space gods and guns that fire the withered souls of villagers.

I listened to the Japanese track when I played as it made everything sound more portentous. I have a feeling if I’d listened to the English dub (they got some decent actors, actually) it would’ve been even sillier, but this way at least it’s kind of anime-kabuki hybrid – all clenched fists and screaming and jumping off planets.

(That’s without mentioning the chapter set entirely in an onsen for reasons where you hang out and coquettishly splash water at sake-servers before you go off and get your arms chopped off by your former master. Japan is weird.)

Also, this is an early boss. Yeah, I know.

The production values of the thing are pretty good. It looks reasonable, but it displays a fairly cinematic sensibility that’s intriguing. The framing of the action on-screen, particularly in the expository moments, is a cut above a lot of what you’d expect. It’s played episodically – the nod to gaming is that you need to get a certain score level to unlock the “true” ending – and there’s ad-break bumpers throughout levels. At the end of each, you get a bit of a preview of what’s coming next. Is it a show? A game? I really don’t know, and thinking about it is hurting my head.

You’ll know by now if you should play it. I enjoyed it, but found the WTF levels a bit too high to thoroughly get into it. Give it a go if you like fighting elephants and punching out planets, though, as those are particularly niche gaming experiences, for better or worse.

Or, you know, watch this condensed version instead. Could be just the ticket.