Sydney’s holding a St Patrick’s Day parade today so it’s fitting that I finished my playthrough of The Saboteur today. Or, as I like to think of it, Paddy O’Guinness Kills Nazis, Sees Boobs.

Heard of it? I didn’t think so. It was pretty quickly forgotten, even by the standards of derivative sandbox shooters. But there was a reasonable mix of stupidity and decent gameplay involved – enough so that I was up until late last night, finishing all the random freeplay missions, something I usually only try to accomplish in an Assassin’s Creed game.

The Saboteur plays fast and loose with history. It’s based on the story of William Grover-Williams, except he’s been transformed into a fiddle-dee-dee Irish caricature called Shaun Devlin. Some choice quotes:

I understand a lot of these are random, idle-based things but COME ON. If they’d had him wearing a Kiss Me I’m Irish shirt and beer goggles they couldn’t have made it more obviously Irishness-as-perceived-by-people-who-think-drinking-green-beer-is-cool. He hangs out in a strip club (the free DLC for the game removes a lingerie layer, so the dead-eyed models in the game can dance with period toplessness, for your unending horror), double-fists whiskeys, sleeps with sassy British operatives and makes jokes to nuns. It’s like flat cap-wearing version of Nathan Drake. 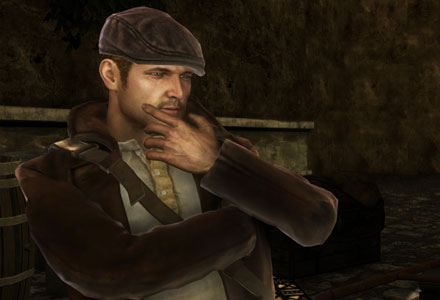 Sean’s weirdly historically-inaccurate tale seems to paint occupation something of an unexpected stricture, and really on there to impinge on his racing career. Mostly, though, the game is a revenge story, set in Nazi-occupied France – well, Paris and surrounds. The city is represented pretty well, and the game’s good/evil dynamic – monochrome for occupied parts, colour for liberated areas – is appealing. The black-and-white sequences look much like Brassai’s works: smeary and dreamy, though here there’s colour highlights (red for Nazi-related objects) instead of straight monochrome.

The problem with this dynamic is that at night (the game has a day/night cycle) it’s impossible to bloody see anything. So expect there to be a LOT of jumping into pitch-black areas you can’t figure out how to escape from. Because climbing is a thing in this game, as per the AC model, and ziplining from Parisian rooftop to Parisian rooftop, while blowing up Nazi gun emplacements is curiously entertaining. But for the rest of the time it’s business as open-world usual – shootin’, sneakin’ and the occasional infuriatingly paced driving section. (Seriously, fuck those mandatory race games.)

Of course, as you complete missions related to the main story – carrying out major missions for the Resistance, mostly – colour floods into areas and makes it less likely that you’ll have your balls shot off for walking down the street. Presumably as Nazis are allergic to sunshine. But sunshine (and buying a map in the usual sandbox style gun-store model) reveals a number of additional targets, including some scenic views a-la Assassin’s Creed‘s synchronisation moments, where Sean can (if he figures how to climb the bloody thing and the climbing mechanism doesn’t crap out, launching his hapless potatoey arse onto the ground) see quite pretty Parisian views. That kind of reward – the views are great – makes playing the side missions worthwhile.

Well, that and the fact I earned a trophy for jumping from the top of the Eiffel Tower into a small pool below. 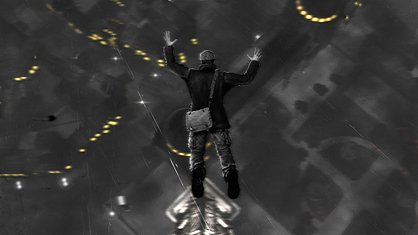 This is probably going to hurt.

It is a good game? No. But it’s a fun game, so much so that even the grinding parts are enjoyable. You can shoot down historically-inaccurate zeppelins, so there’s a big tick right there. It’s fast, and largely fun, and the desire is certainly there to see the thing through to the end. I’m pretty sure I’ll return to it, and crank the PC version with all bells and whistles enabled, just to see the differences from the PS3 version, because the art direction of the game certainly warrants it.

I really enjoyed it, despite the cringing, so I’d definitely recommend checking it out if you see it kicking about for cheap. To be sure.