Frankenstein by Junji Ito.
My rating: 5 of 5 stars.

Frankenstein is a story that most people are familiar with. Whether you’ve read Shelley’s original or no, you’re probably aware of the general thrust of the story thanks to films modern and classic. You know: creation, exclusion, and that it’s his Dad’s name, not the monster’s. So what can be brought to another adaption of the work? 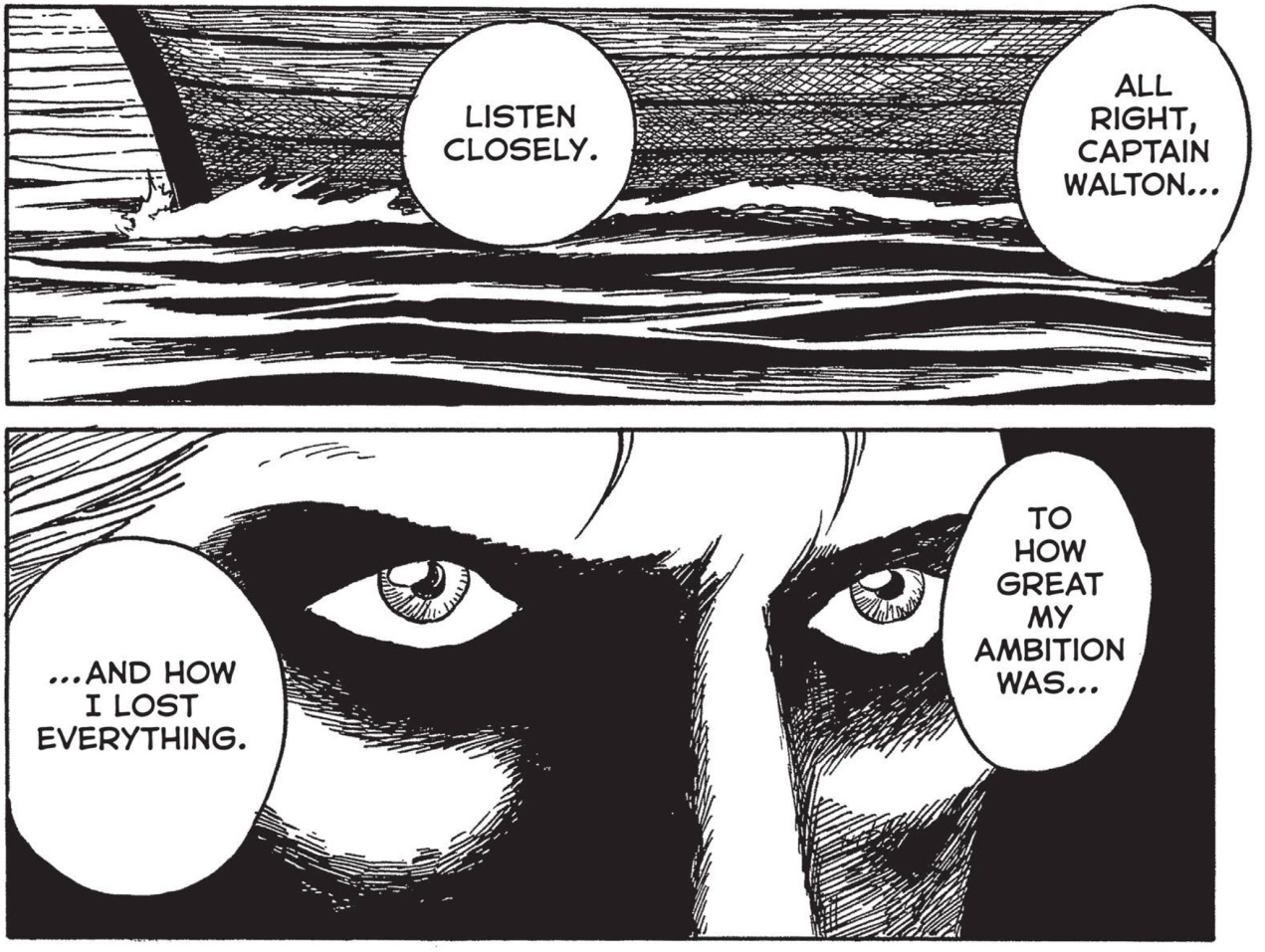 To be fair, there’s fuck-all else to do on an Arctic journey. Talk away, Vic.

Junji Ito is mostly known for weird and fairly gory manga, so it’s interesting to note that this version of the tale – an adaptation, so not strictly canonical – is more subtle than I’d expected from his earlier works. 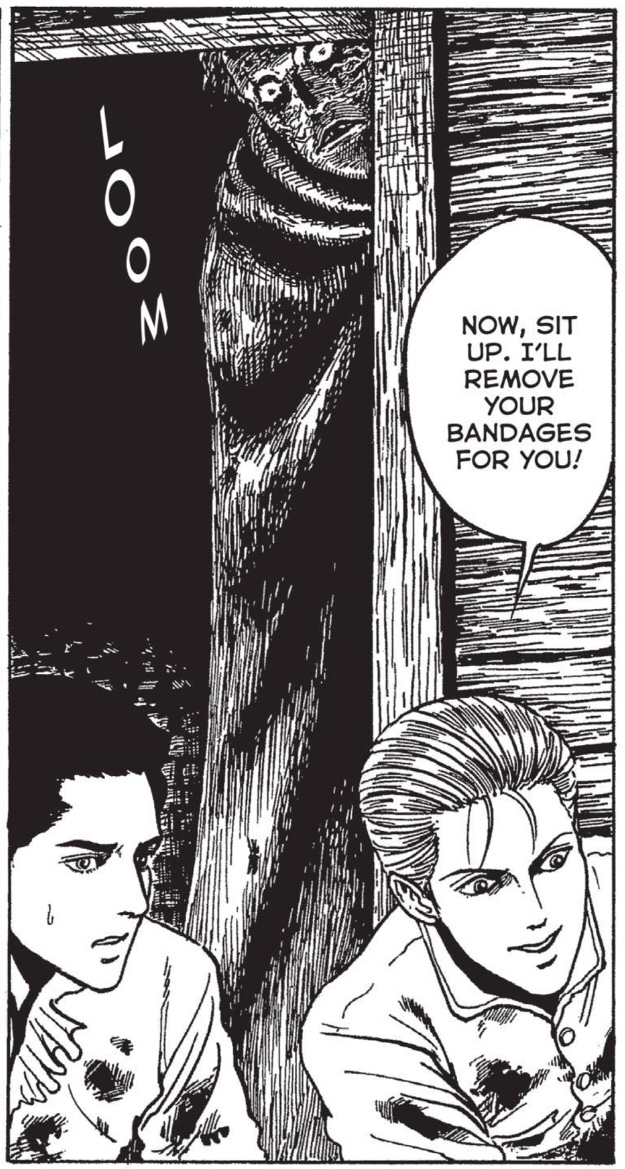 Not subtle: monster or stage directions.

The story departs from Shelley’s version in a couple of places, but not in ways that cause undue concern. The way the monster is portrayed is suitably horrifying, though it’s still easy to feel sympathy for the stitched-together thing, because the story is not played for gore’s sake. It’s shocking in places, yes, but that’s because the source is, not because Ito’s take is particularly wild. It’s respectful, and the translation reflects Shelley’s vocabulary and pacing – but there are some departures.

Inclusion of the monster’s forays into comedy prove a bit of a failure.

What’s interesting about Ito’s adaptation of Frankenstein is that it was commissioned by its publishers as a tie-in for Kenneth Branagh’s 1994 version of the story. This commissioning was the first time Ito had read the story, so it’s perhaps unsurprising that the filmed adaptations probably influenced his take more than anything else. 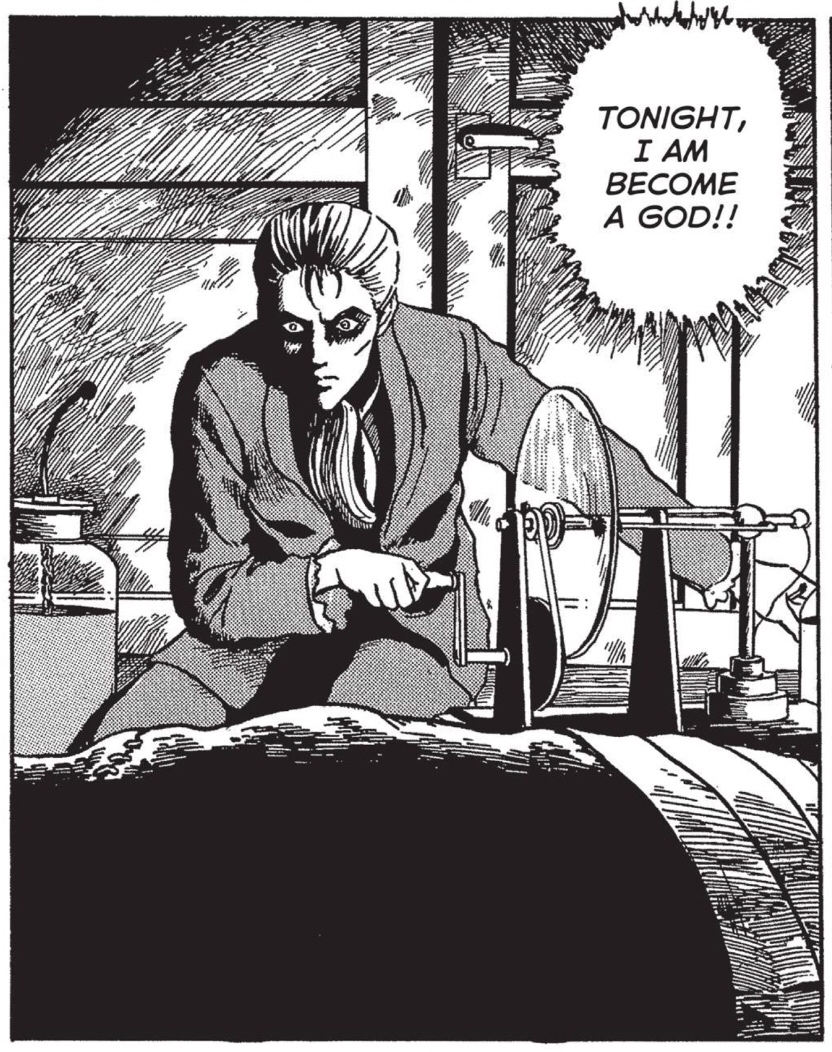 AND TOMORROW A DOG!

Frankenstein isn’t the only piece in the collection, though. Aside from a brief digression into the world of family dogs – yes, really – there’s a handful of stories gathered here that circle around the increasingly odd life of a school student named Oshikiri.

Not gonna lie, this sounds ideal.

Let’s just say that he’s not exactly a normal boy. He’s a bit of a shrimp. And a bit confused, identity-wise. 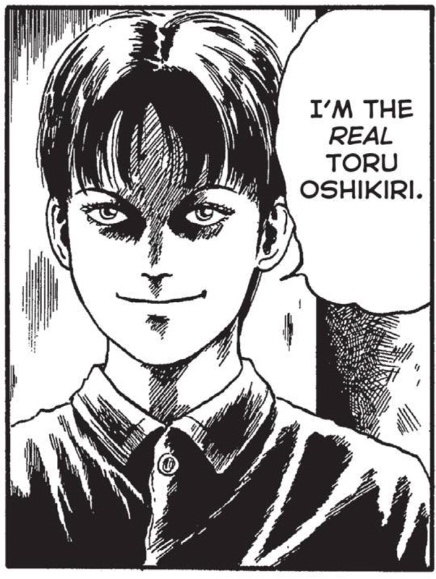 Yeah, but ARE YOU?

And you know, also could be from another parallel world.

I did TELL you not to look under the bed, people.

It’s a difficult thing, on top of having to do well in school, that’s for sure.

The stories involving Oshikiri are stranger than Ito’s Frankenstein, as is expected. There’s very much a feeling of folk horror, of legend and reality gone awry. In keeping with the author’s usual style, there’s also a lot of places where the mental health of the narrator – and their reliability – is questioned. Are we seeing the real world, or the static-filled invocation of disorder?

Not at all concerning.

It’s never particularly easy to tell. Laying the whole connected-universes idea on top of that, the stories are disorienting reads: is this the real world? Is it seepage from another world? Is it hallucination?

Either way, I’ll SHOW HIM.

The artwork pushes this point. It’s clean, and seemingly everyday, but then there’s… frames… that just don’t look right. It’s uncanny stuff, and eminently readable. I kept pushing on to see if there was any resolution to Oshikiri’s travails, or whether the tales are a collection of moments in time, frozen.

The answer is satisfyingly imprecise.

THAT WAS MY PLAN ALL ALONG!

This collection of works is great. It’s a reminder that Ito has a wonderfully singular voice. His other titles have become iconic in their own rights – Tomie and Uzumaki (soon to be adapted into animated format) certainly are very well regarded – but his version of Frankenstein shows that the horror titan is just as good when he hasn’t written the underpinning text himself.