Pathworking the Tarot: Spiritual Guidance & Practical Advice from the Cards by Leeza Robertson.
My rating: 2 of 5 stars.

I’ve read cards for a couple of decades now, though am very much an anti-woo stalwart. I like the narratives a reading can create, and about seeking meaning from the chance juxtaposition of some printed designs.

But, like most readers, I still feel there’s more I could be getting from the decks. I mean, I’m not a Papus or a Waite, and certainly not a Pollack. And so when the option came up to read a book on pathworking, I took it. 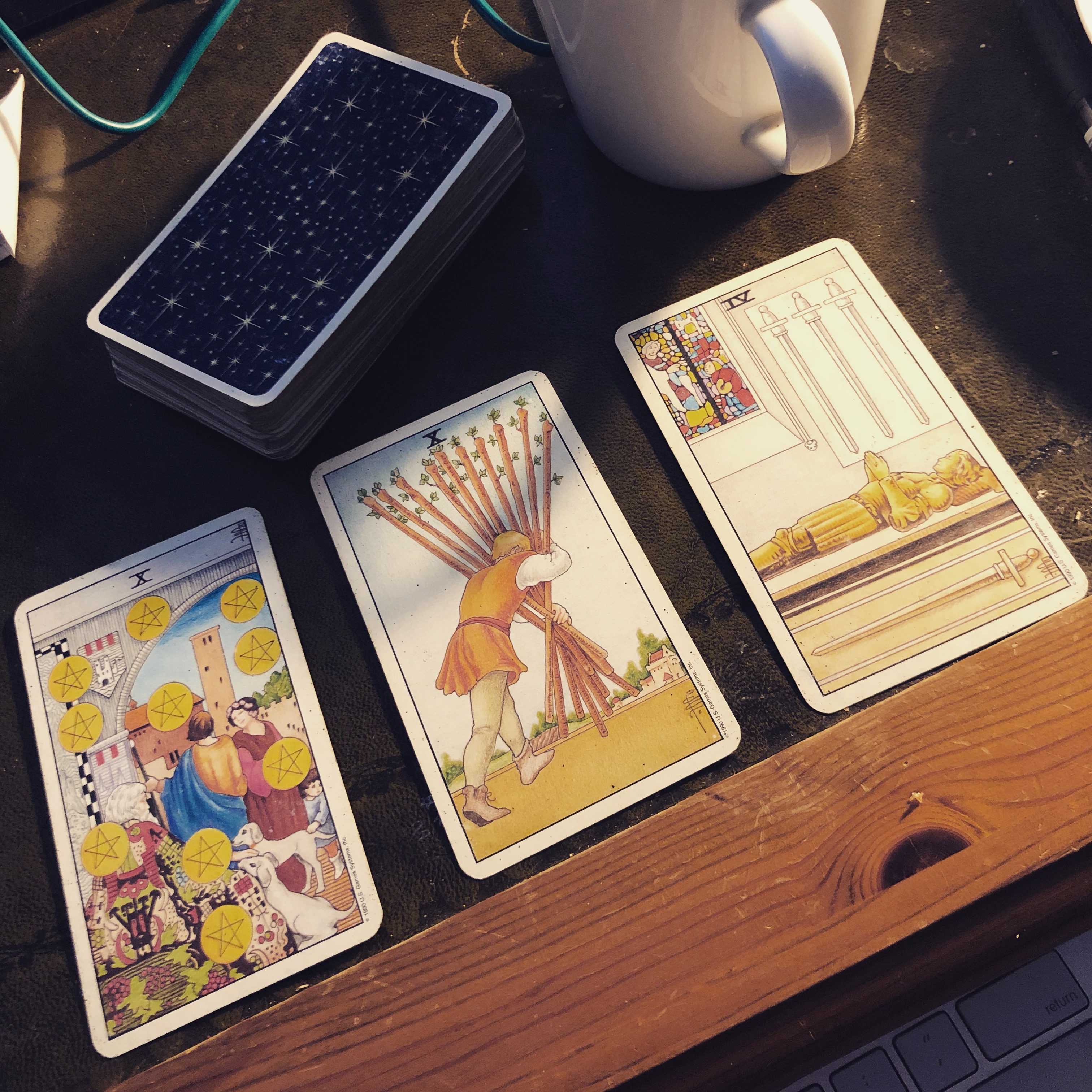 The secret ingredient of any reading is tea.

It’s a shame I came away a bit bummed.

(Sidebar: I’m not an expert. I’ve read a lot, and felt my way around this area for ages, but am not attempting to pooh-pooh this based on any perceived superiority. All readers are learning all the time – or should be, at least.)

Pathworking is, in essence, guided meditation. It’s about using the cards as indicators rather than in the strictly divinatory sense that some might consider is the standard or correct usage for a deck. For this text, Robertson divided the deck into major and minor arcana – a fairly standard division – and details three ways of interacting with the cards. Intentional, intuitive and wandering methods are covered for each of the major arcana, and then for each value of the minor arcana. The idea is to focus on one card and to foster a connection with it through the various methods, ranging from meditation to going for an actual walk with your laminated chum.

The book reads a bit more fast-and-loose than I prefer in my tarot texts, but that’s a personal preference.

I did like the way that the minor arcana’s court cards were treated as non-binary and reflective of an interlinked journey rather than moments in isolation. Similarly, the way the numbered cards led to each other was a good take, and I happily took some pointers from some of the comments within.

I filtered a lot of the commentary and exercises, though. It felt like a lot of the intuitive methods of examination could’ve been shuffled around with not much difference: there’s only so many times one can read about stepping into the shoes of a card without thinking that there’s something interchangeable about the approach.

I found it strange that the book seems to lump everything in, the assumption being that if you are interested in cards, then angel work, crystals, candle magic, vibrations, mantras, altars and number correspondences will all tag along for the ride. I can totally understand that there’s a market for whom this is the case, but it clanged with me.

Something that irked me about the text was the way the author continually refers to their previous works. I understand that Robertson is a deck designer and has written other works on the tarot, but the continual mentioning of other decks (and the occasional “I wrote about this in another book so I won’t do it here”) passage seems freighted with the expectation that I’d be either familiar with these things, or else would grab ’em at my earliest convenience. This is admittedly a minor irritation, but it felt in places as if the book were written with the assumption that the reader would already be a fan.

Additionally, there’s more than a few references to Robertson’s clients, which seemed unnecessary at best and a bit of a brag at worst. I don’t know: maybe the target audience of this work is readers with an established client list. In that case, they’ll perhaps feel a bit reassured that a working reader is writing in a manner that refers to them. For someone who doesn’t see clients – I generally only read for friends and by request – it seems to only accentuate the distance between my practice and the author’s.

I admit, the limited time I had to read the book – digital review copies have DRM attached which turns a copy into woofle-dust after a certain period – probably influenced my view. Robertson is clear that the book is designed to be used in a take-once-daily kind of way, to deepen the reader’s connection to their deck. Perhaps I would have found less repetition had I the freedom to engage in this manner. It may offer a different perspective if approached this way – but based on my feelings on this read-through, it’s unlikely I’ll give it a second chance.

There’s some good ideas here, and some approaches that I might well adopt – but I think Pathworking the Tarot highlights that my approach to both tarot and pathworking are a bit different to the author’s. I suspect that if I were just starting out in tarot, I’d have a much more glowing take on the work.

(I read this book ahead of its publication, thanks to Netgalley, in exchange for an unbiased opinion. It wasn’t for me, but it might be for you, and you can find out more from the publisher’s page on the work.)