Batman: Earth One, Volume 2 by Geoff Johns and Gary Frank.
My rating: 5 of 5 stars.

“Second Earth! Same as the first!” is what The Ramones would’ve sung had they not been into SpiderMan so much.

I could probably end the review there. This second (and final, so far) volume of the Earth One reboot of Batman’s beginnings continues the good things of the first. We’re still shown a Caped Crusader who’s trying to get his head around his role – a man who hasn’t yet attained the level of subtlety or experience that’s needed to become a spooky totem.

You’re not the only one, Al.

Sure, crims are scared of him – the initial scenes of the book remind me a lot of the opening freak-out scenes of the Tim Burton Batman movie in their worried gabbling – but he’s not quite the protective myth the city needs. Not yet. But you know, at least he’s not crashing mayoral parties in this volume. 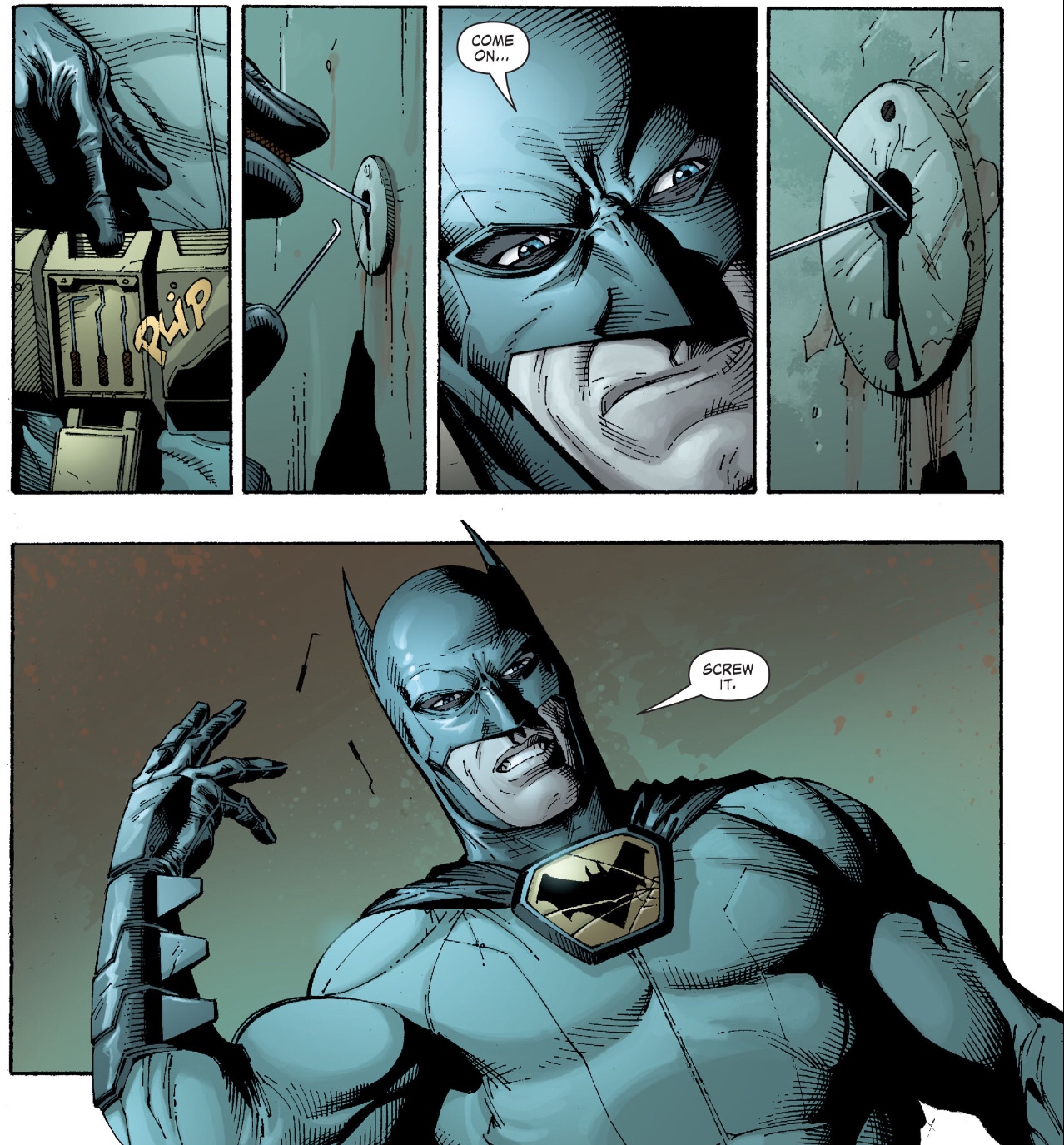 I guess those terrible lock-picking minigames were accurate, then.

So that’s something. Even if his evidence-trampling entries show he hasn’t quite reached the rank of World’s Greatest Detective yet.

Relationships between Batman’s key allies – Jim Gordon and Alfred Pennyworth – continue to be explored here. It’s all a bit blokey, but it’s fun: Alfred’s turn as a butler is terrible (his off-the-cuff comment proving to have long term ramifications that it’s hard to shake), but his assistance in the formation of Wayne’s BatCreed is important. Likewise, Gordon becomes invaluable as the story progresses, and at least he doesn’t get punched out by the orphan this time around.

I did like this nod to the label-heavy history Batman has, though.

OF COURSE HE FUCKING DID, JIM.

This entry spends more time on Bruce Wayne, too. Sure, there’s plenty of caped escapades to be going on with, but we learn more of how Bruce works here. He’s a loner (duh) but there’s an element of why illustrated here thanks to a dickbag Harvey Dent, who hasn’t let the no-parents guy forget that he has that crazy Arkham blood in his veins.

What’s interesting to me, though, is that Johns decided to not mention the Joker in his story. Instead, we’re presented with a Riddler-centric story. It’s surprising that a reboot wouldn’t feature the criminal who is most closely associated with Batman – but I guess you’ve gotta keep something in reserve in case another run shows up, right? 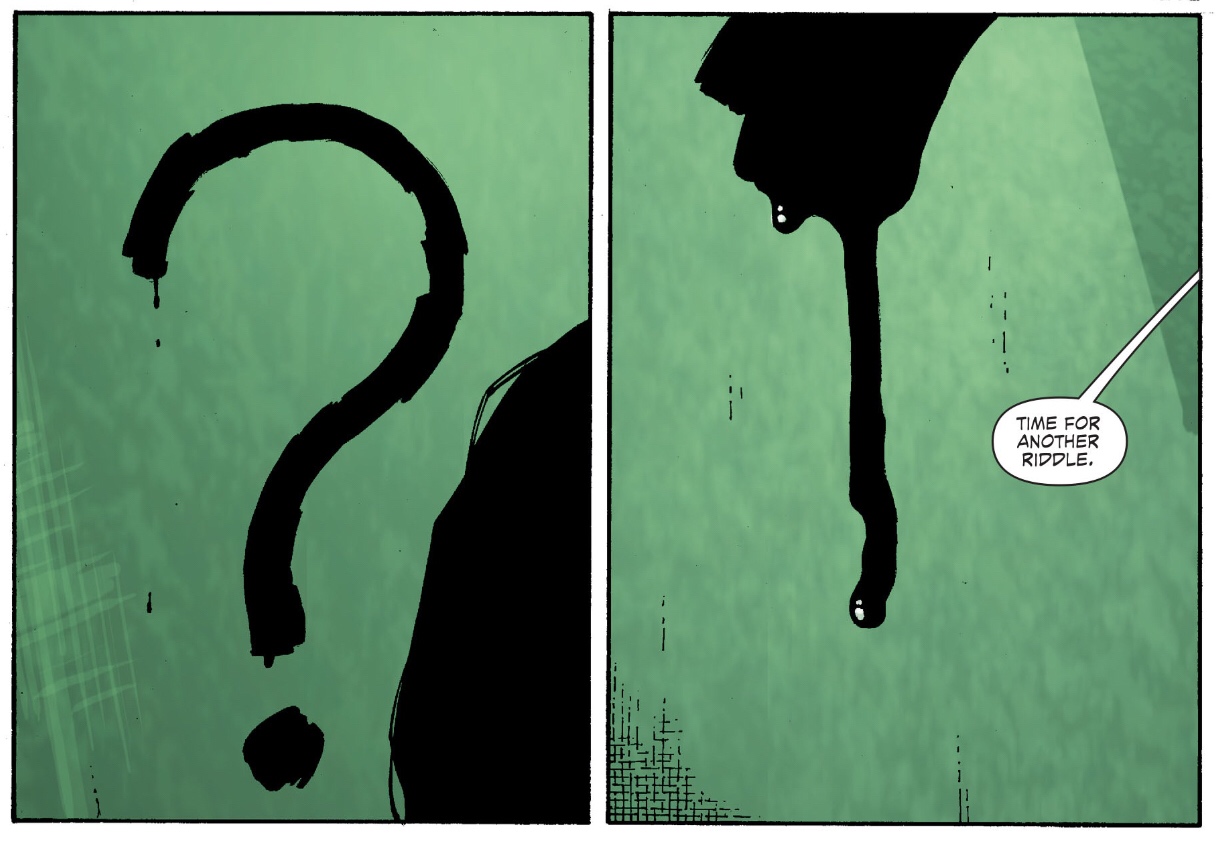 ‘Who Can It Be Now?’ sax line plays softly.

This is a reinvention of the main character of Batman that’s been pretty successful. I need to read the more recent books to see how their take on him stacks against Johns’ version, but I’m fond of this. It allows the reader to look at some familiar faces – Catwoman, Harvey Dent, Commissioner Gordon, Alfred, Killer Croc and more – a little differently. Sure, it’s all a bit what-if but it’s enjoyable to speculate. And that, let’s face it, is what superhero comic books are. 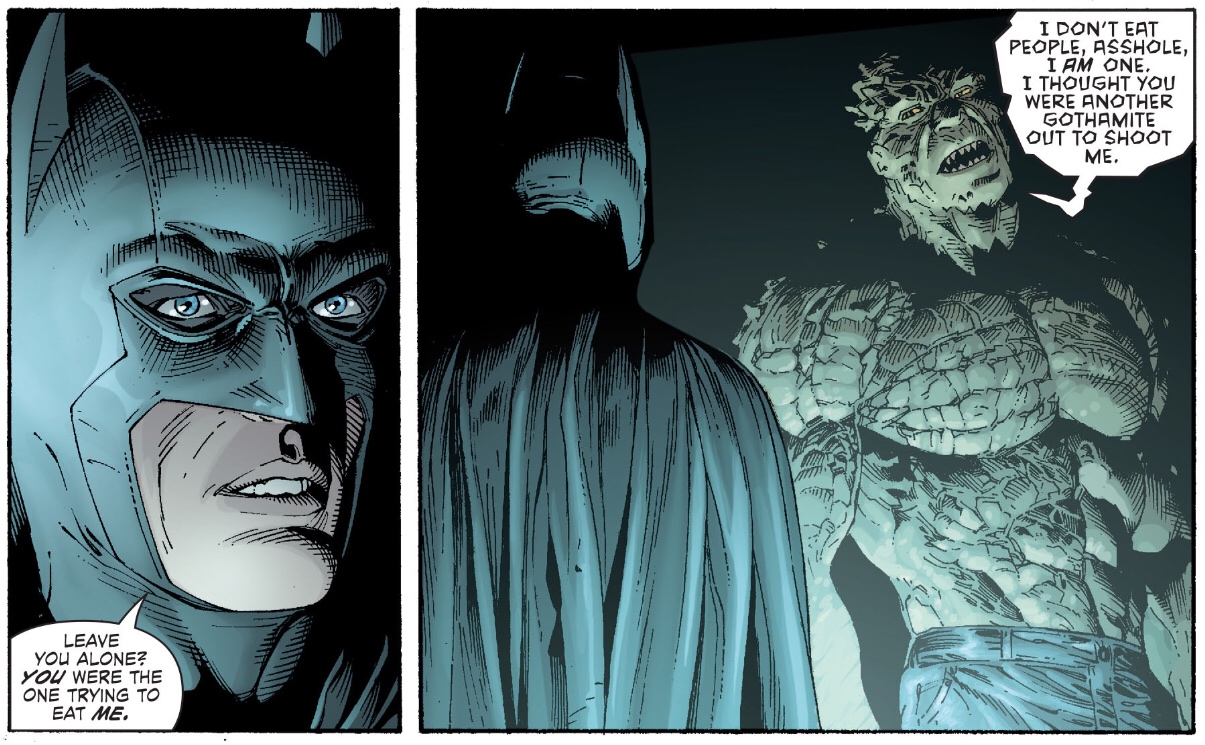 It’s not a Superman level of dickery, but it’s close.

It’s a shame there hasn’t been any more of this view of the Caped Crusader, because it’s a great sidebar. The art shines, and the kinetic energy is excellently enjoyable. I’d love to see more in this vein, as it reignited my desire to get into the world of Gotham once more.