Marquis de Sade: A Biography by Maurice Lever.
My rating: 3 of 5 stars. 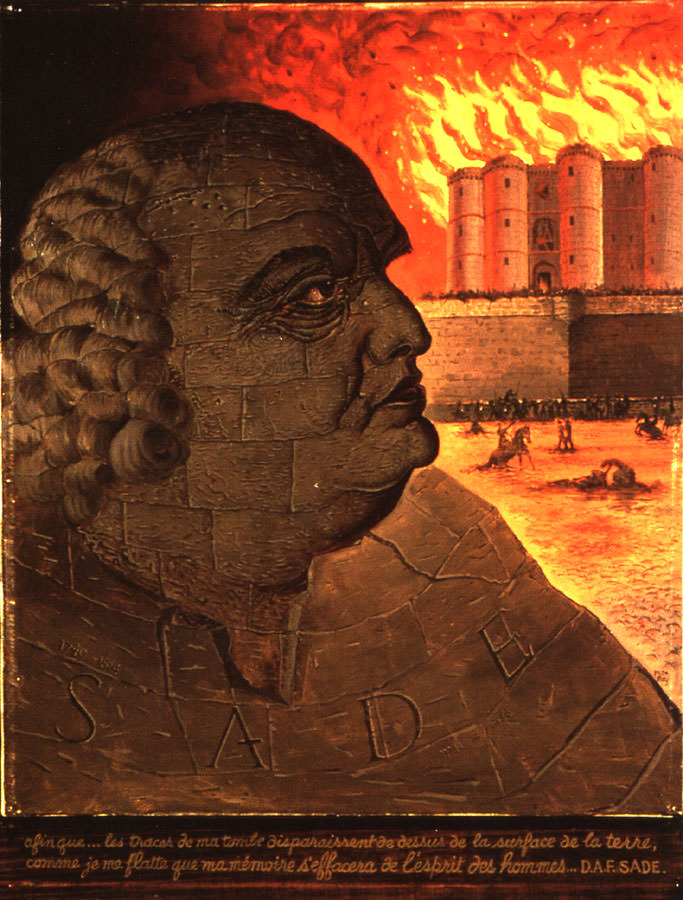 I dunno, I always figured his portrait would have more bare arses in it.

You’d think it would be something to do with sex that’d be the key driver of the guy’s story right?

Well, having read through all 600-odd pages of Maurice Lever’s biography, I gotta tell you that the sex shit is nothing. The real focus of ole DAF’s life was real estate.

I know, right? Mind blown.The undoubted root-rat peccadilloes of the guy are examined at length throughout this work, which is a pretty accomplished look at the old perve’s life and times. But throughout the pages, the thing that comes back time and again is money and about how to best utilise the proceeds from holdings, how to wring the most currency out of one’s abode. And how to offload that shit when debtors come calling.

Seriously, Donatien is worse than I was with my first credit card. He owes money all over the joint, and advantageous marriages and multiple mortgages seem to be his best way of raising extra money to spend on Spanish Fly pastilles (in the hope of encouraging flatulence from prostitutes, so he reckons).

So. If you’re looking for tales of louche libertinism then sure, they’re in here. But other than those which were the basis of legal proceedings (such as the aforementioned pastilles, served with a side-order of whipping and footman wanking), the book isn’t as salacious as you’d imagine. Yeah, the guy wrote transgressive porn: but he was largely neutered by the machinations of the state, of the law, and of his family. He was kept out of society for a lot of the time, so his actual boning behaviour was fairly commonplace, given his station and disinterest in court. He was a prisoner, mostly, in a number of jails and asylums, and despite the boons his connections allowed him, he still couldn’t do what he liked, either financially or physically.

The biggest surprise was that with most of the can’t-keep-it-in-his-pants stuff, de Sade was merely following in the footsteps of his spendthrift sire. I guess there really isn’t anything new under the sun, even when we’re talking about a story involving The 120 Days of Sodom.

(I was disappointed to find out that his time at Charenton wasn’t as Marat/Sade would have had me believe. GODDAMNIT THEATRE, YOU LIED TO ME.)

Lever’s writing (through Arthur Goldhammer’s translation) is clear, and the book – though overlong – is wry and keeps interest up all the way through. Yes, even in the transitions of the Revolution, which seem much more convoluted and complex here than in almost any other recounting I’ve read. The chapters are broken up with pithy subheads, and the prose is, though copious, easy. That’s not to say it’s not dry, though – there’s a lot of chaff to get through.

Much is made by Lever of his access to primary sources that other biographers haven’t used. I have no idea whether this is the case, but the author misses no opportunity to correct mistakes in other biographies of de Sade, slipping the academic boot in with Gallic relish. It’s deeply satisfying to encounter his take on how people – surrealists, mostly – have misinterpreted de Sade and his role in the Revolution, but I do love me some bitchy academic infighting.

(I’m actually grateful to Goldhammer’s editorial instinct: he snipped out lengthier letters which added no further information to non-French readers. I can’t imagine how long the unexpurgated text must be: you’d really have to be into the guy to pull that one off.)

The book is cogent, well researched and entertaining to a point, but it also shows its age a little in its Freudian reading of de Sade’s literature and habits. It’s not an enormous strike against it, but it certainly felt forced and clunky in those moments.

I’d always been interested in de Sade, obviously because I was an insufferable edgelord when I was younger. I’ve lugged this book around for almost 25 years and only just come around to reading it. Now, I wish I had done so when it came out. For starters, I’d have saved myself a bunch in moving costs – it’s heavy – but more importantly I would have realised that de Sade’s works are the product of the mind of one imprisoned by his family, his state, and himself. That the big libertine was really without liberty – and that everything flowed from there.

(Even if he couldn’t bring himself to stop cranking it like a teenager.)