My Friend Dahmer by Derf Backderf.
My rating: 5 of 5 stars.

It’s not logical, really, that someone in search of some light graphic novel reading should end up reading a book about serial killer Jeffrey Dahmer. You know, the guy who killed men and had sex with them. The Milwaukee Monster. 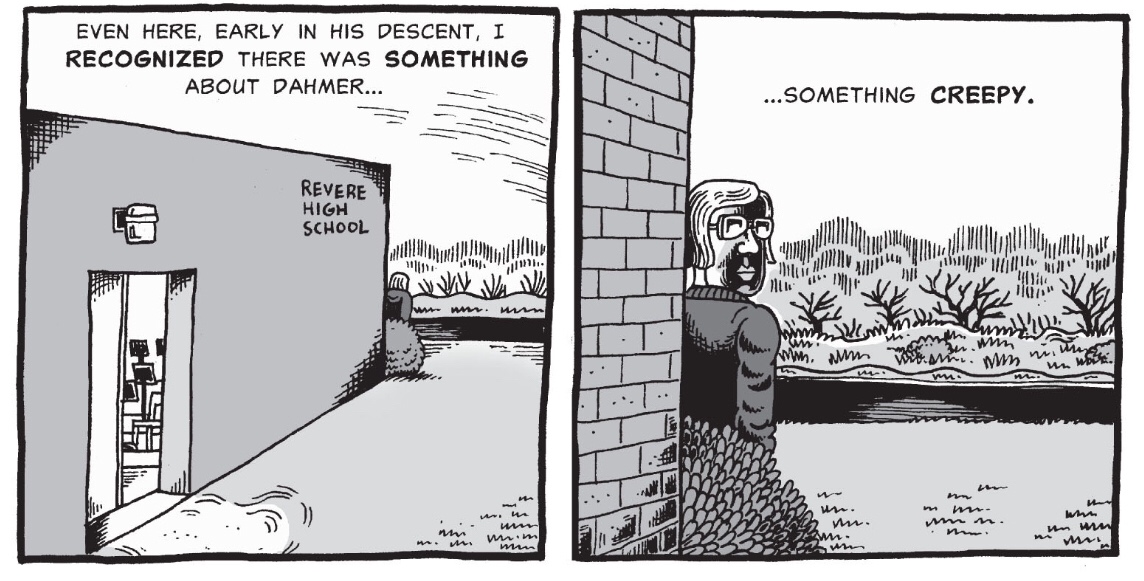 This guy. Yeah, you know the one. Somehow, I ended up thinking that reading something written by one of his friends was A Thing To Do in place of, I dunno, reading about muscled science freaks with superpowers.

Weirdly, it was a lot more enjoyable than superheroics. But still, this is an origin story, and it hits home harder because it’s true and it seems to be filled with so many missed opportunities to stop the serial killing that would follow.

The book’s been though a couple of iterations, from a self-published short to the more fulsome edition I read. The digital edition includes deleted scenes, some example pencil drawings of pages and the original, shorter version of the tale. It’s a good inclusion, and it’s fitting that it is included after the more fulsome version, because it allows the reader to see what beats had been emphasised, or expressed more successfully given time.

The story is pretty simple: author Derf Backderf went to school with Jeff Dahmer. And so he tells the tale of the weird kid who nobody liked as a friend, really – but who had his own fan club due to his ability to “spaz” in school halls. It’s the story of a lonely, lonely boy with some disturbing fixations who never has any check on those desires. It’s a story of a kid whose homosexuality was kept under wraps, whose home life disintegrated and whose self-medication through alcohol grew worse and worse. 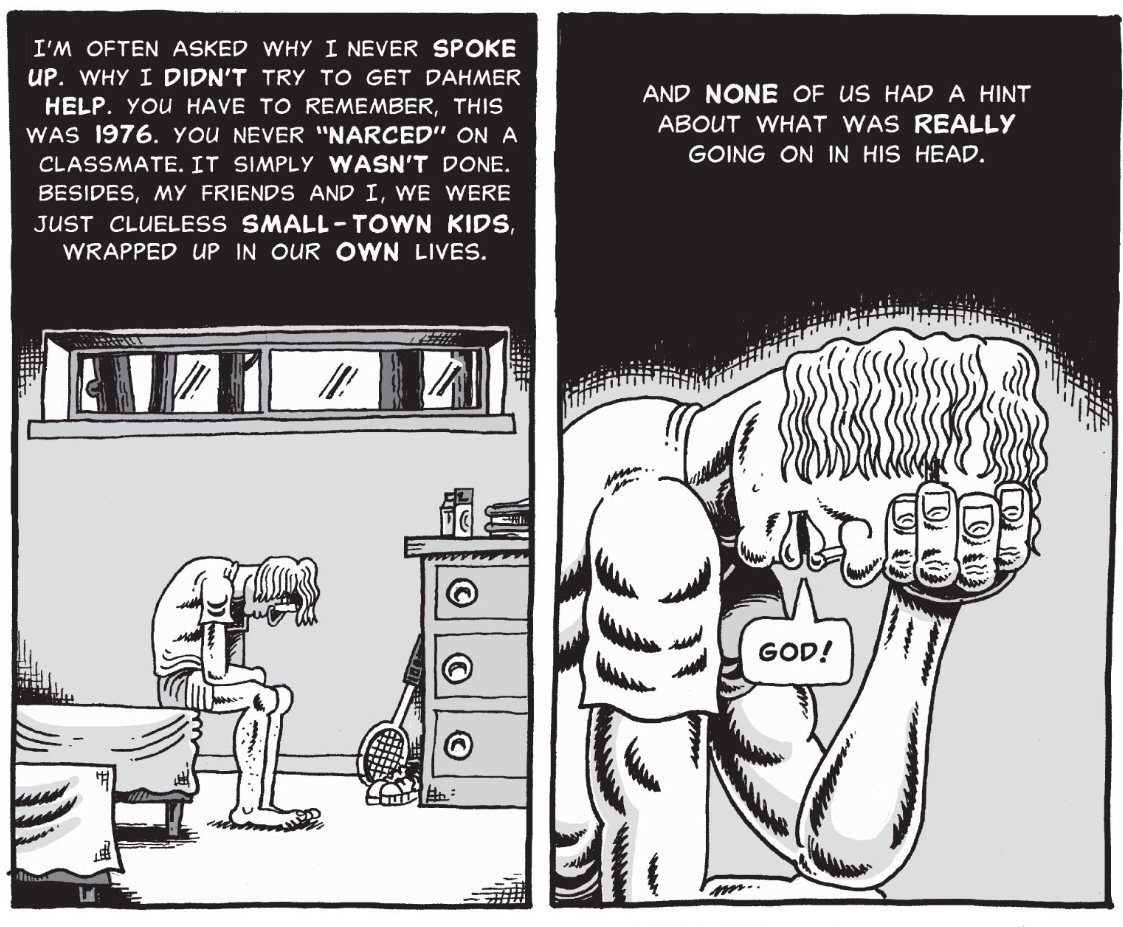 And it’s a story about how adults – parents, teachers, cops – never said anything. Where were they when a young man was walking the halls with a styrofoam cup of scotch? What were his parents doing, other than divorcing and sniping? Where was the oversight?

Plainly, there wasn’t any. And the book is heavy with a feeling of what if. 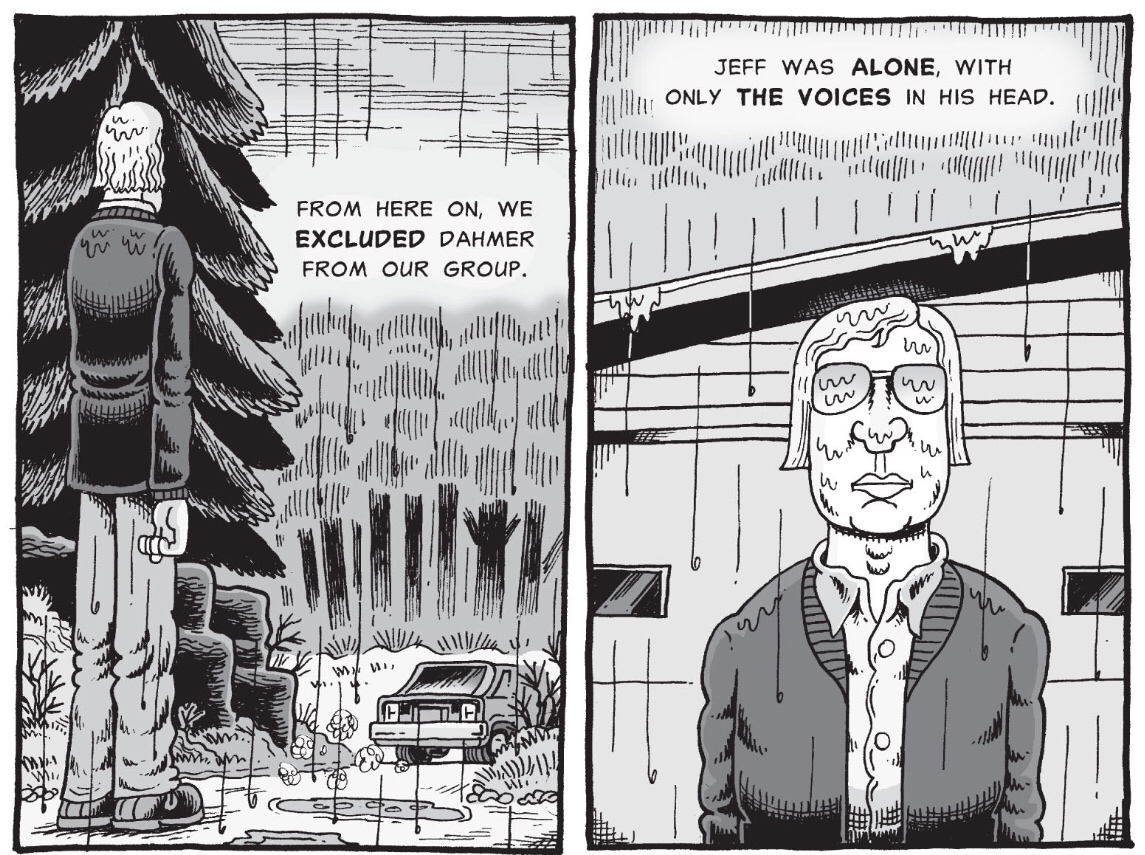 Backderf doesn’t cover himself in glory in this story, for sure – there’s plenty of admission that the tricks and insults they pulled at the time were juvenile and shitty – but neither is there a sort of promotion of the whole we went to school with a killer and SURVIVED! narrative that other authors might indulge in. It’s played pretty straight, and – I was pleased to discover – is pretty comprehensively sourced. Whatever’s in the book is based on recollections from multiple parties, or from published record.

Importantly, Backderf makes the key point that while the tale is sympathetic – I defy you to read this and not feel deeply fucking sad at the downward spiral a kid becomes caught in – it is not empathetic. It does not support Dahmer from the moment that he takes a life, and it certainly does not seek to titillate readers who are obsessed with the guy. It’s a record – quite touching, in places – of high school life in the ’70s, and of the inability of both the time and Dahmer’s fellow students to give voice to the recognition that something was deeply wrong. 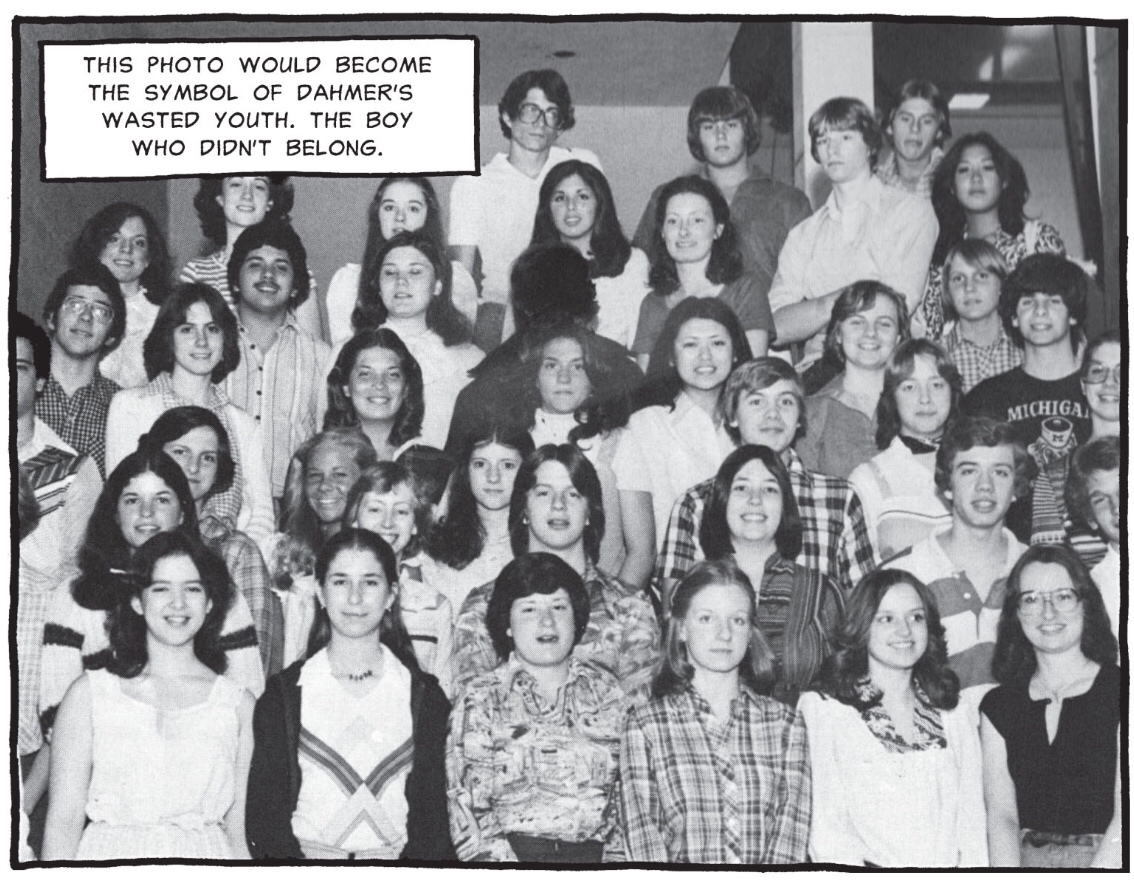 Backderf’s illustrations ride the line between amusing and creepy pretty perfectly. The style is reminiscent of a less frenetic Robert Crumb, coupled with the physicality of Don Martin‘s work for Mad. A touch of Gary Larson. But more than this, there’s something of the Charles Burns in there as well – that darkness at the heart of adolescence abounds in spades. It’s weirdly elastic and playful, sure – and the work is about teenagers, so it does fit, kinda – but there’s the sense of something malevolent there. Shading plays a bit part in this: there’s a noir sensibility at work when we’re shown further grim revelations about Dahmer’s path – he’s depicted in shadow, just dark eyes and sweat. Or, more ominously, as a hermetic figure walled behind blank glasses, offering no window into what lies inside.

There’s been a movie made (with the same title) from this book’s contents. It’s pretty good – I enjoyed it at least – but this is the real deal. I found the portrait painted here to be much more disturbing, and a lot more bleak than the film. 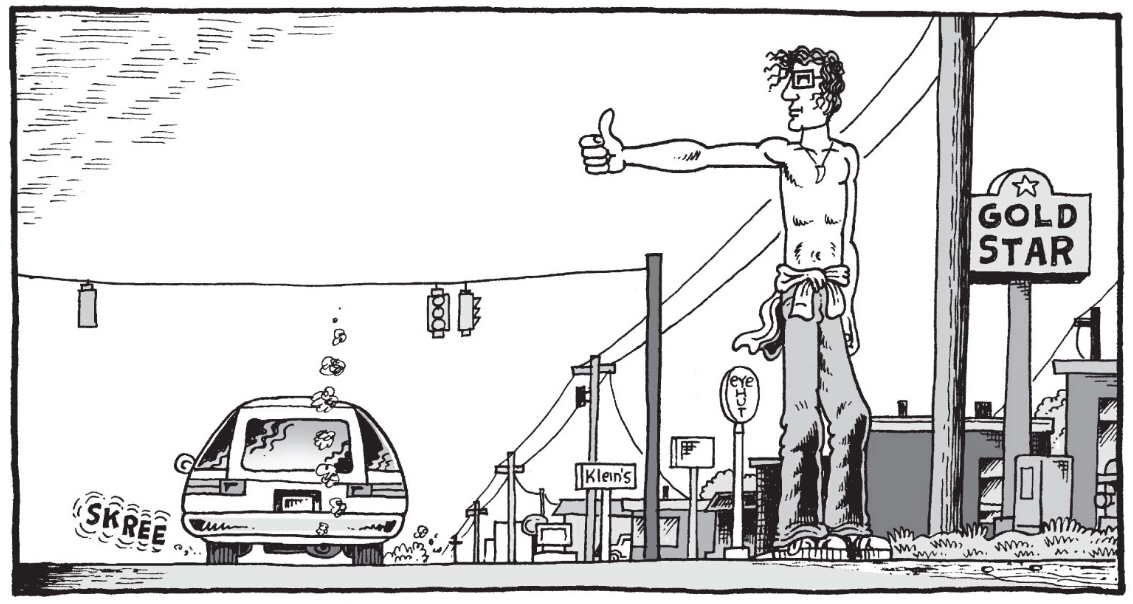 If you have an interest in what might make someone do the things Dahmer did, this is a must-read. It’s more sensitive than I had expected, and seems possessed of a terrible weight. It’s very much worth your time.