Time to revisit something I’ve played a couple of times that involves bike couriers, only with cleaner duds, more tattoos, and a shitload more parkour than pedalling.

It’s got animated cutscenes! It’s got a megalopolis that’s keen on brushing undesirables under the rug! And it’s got some curiously disinterested acting across the board. It’s Mirror’s Edge, perhaps one of the best examples of a game I love even though so much of what it does is cack-handed or busted.

In the game’s world, you’re Faith, who’s a runner: a covert communicator. It’s a fancy name for a courier, ferrying information – the most important thing, as ever – between the disenfranchised and the rebellious. And of course, The Man wants to stop your communications… and so decides the easiest way to do that is by framing your sister for murder. Because *reasons*. 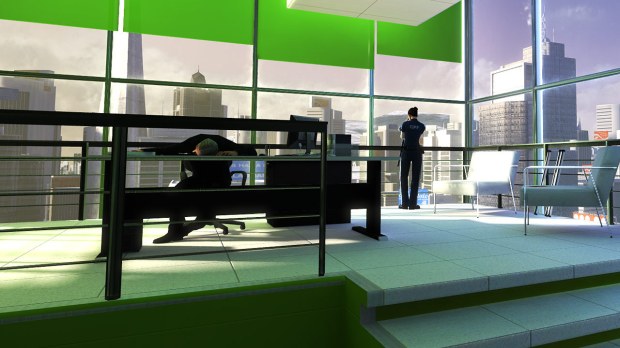 The story is pretty basic, though that’s kind of unimportant: the draw for the game (at least for me – I was pretty excited for it when I learned of it during development) is the free-running mechanic. The game offered a different experience, one that I’m pretty sure only the Assassin’s Creed series (yeah, and maybe Prince of Persia and likely Dying Light, OK) has really embraced: to feel the freedom of climbing all over shit, and to high-five yourself as you make a leap by the skin of your teeth. To provide something that other games didn’t, really: the feeling of absolute freedom, even though the game is as linear as an entry in the Call of Duty series.

And does it succeed? Well, kinda. The game certainly feels full of promise, and I am always thrilled when I return to it by the prospect of being able to run up a wall, backflip onto a nearby ledge and then continue, at speed, towards a zipline that’ll take me towards a far-away goal. I love the fact that the game encourages you to move and then think, rather than to cautiously pace around a map, from cover to cover.

There’s a reason the Assassin’s Creed games show the player character in third person rather than first. That reason? Because it’s really fucking hard to judge where you’re going to land, what you’re going to grab on to when you can’t see a full body as a frame of reference. Many’s the time in this play-through that I walked off a narrow ledge because I couldn’t sense how close to the edge I was, or where I leapt into the empty air when I had intended to grab a nearby railing. It’s the sort of thing that hampers Mirror’s Edge, particularly as some sections have zero room for error.

Hope you can hit those girders there, champ. Otherwise you’re going to FACEPLANT TOWN.

Let’s just say you’ll get used to seeing that falling to your death and hitting the footpath like a bag of yard mulch footage pretty goddamned regularly.

(I still have to play Dying Light, another game with a heavy parkour emphasis. I’d be interested to see whether that game has the same leap-into-nothingness-instead-of-the-platform-you’d-aimed-for difficulties that Mirror’s Edge has, or whether the experience is improved. Eagle-eyed readers may remember I had some of these bitches about American McGee’s two Alice games, too.)

The other thing which steams me is the awfulness of the gunplay in the game. I get that Faith isn’t meant to be a gun-totin’ bruiser, and that the game wants you to use its disarm mechanic to beat brutes. But the amount of times I’ve scored a gun from a downed foe and found I’ve dumped it immediately – and been shot in the face in the time between the drop and pick up animations cycled – is ridiculous. I understand that the game wants to push you towards running, but later areas aren’t passable in this manner – you have to use weapons to clear some areas – and the lack of firepower polish makes it a real fucking drag.

(Oddly, the final chapter’s firefight wasn’t as difficult, I thought, as some of the preceding encounters. Indeed, the final final section wraps up particularly quickly, leaving an odd wait was that it? feeling, even though at that point you’re about ten hours into the game.)

But really, the look of the thing trumps my quibbles. Even when playing an emulated 360 version of the game, it looks pretty remarkable. Not as sharp as when played on PC, sure, but the design is crisp and clear. It’s pristine – a metropolis of whiteness, of dazzling perfection – except for the flow, the colours that indicate where you can run, where you should land. It’s hyperreal, and does a lot of the heavy lifting. Sure, parts of the engine appear dated, but it’s to the team’s credit that it looks as good as it does, ten years later. I mean, this is a game that’s now available on phones and I still felt drawn in enough to give it a whirl in 2018 – and that’s entirely down to how it looks. 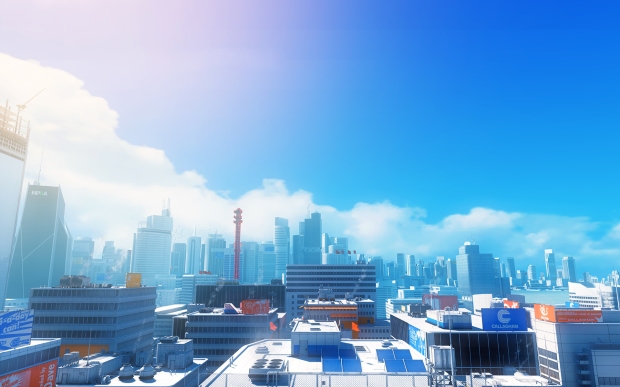 Who wouldn’t want to break their ankles leaping from roof to roof?

The soundtrack fits the visuals: it’s modern and clean. It’s electronic, a combination of ambience and glitch that just works. Each time I play I discover I’ve forgotten how good it is: I should probably just cough up and buy the bloody thing. (You can listen to it here, if you like.) It’s certainly accomplished, which is more than I could say for the voice acting in the game: everything is a bit phoned-in, a bit who cares. To be fair, there is probably more player interest in wall-running than there is in DYSTOPIAN SIBLING DRAMA but still, some emotion would be nice.

There must be something to this game, because this is the third time I’ve played it through. (I first completed it on PS3, then again on PC when I first bought a fancified graphics card – hello bells and whistles – and finally again on console, as an emulated title on the Xbox.) I think it’s the opposing feelings I have when I pick up the controller.

Repeatedly kicked in the face by something aesthetically pleasing? THAT’S MIRROR’S EDGE.

Each time I play it I’m both exhilarated and frustrated: I remember how good it feels to nail a series of movements that sent me into somewhere I couldn’t have imagined earlier – and then begin to wonder whether my happiness at sticking the landing is the result of suffering through so many hair-trigger failures thanks to a system that often seems to want to see the player fail. I’m thrilled by the sense of speed, by the clean lines of the game and I’m sent into a spiral of screen-screaming by the lacklustre gunplay. Maybe it’s the juxtaposition of AW YISS and FUCK NO that keeps me coming back.

The sequel is sitting on my PS4, just waiting to be played. I wonder how many of my niggles might have been nixed. I suppose there’s only one way to find out.