Powers of Darkness: The lost version of Dracula by Bram Stoker and Valdimar Ásmundsson.
My rating: 4 of 5 stars.

This book serves as a re-translation of an early Icelandic translation of Bram Stoker’s bitey classic, Dracula. The Icelandic version of the Count’s tale dropped in 1900, only two years after the first translation (into Hungarian), and is notable because there’s evidence – lovingly detailed in forewords, afterwords and footnotes – that Stoker was in touch with the Icelandic translator of the work, Valdimar Ásmundsson, founder of the newspaper Fjallkonan, providing information from draft versions of the English text to work with.

The title of the work as serialised (and republished in book form) was Makt Myrkranna, which translates as Powers of Darkness and seems more fitting for the tale, as it seems a lot more grim and concentrated than the work it purports to present, piecemeal. Norse mythology shows up, as do busty, licentious maids, and a delightful meteorological term which translates literally as “murder weather”. It also makes mention of recent English murders, with glee:

“Yes, these crimes, these horrible murders; those slaughtered women found in sacks, drifting in the Thames; this blood that runs—runs and flows—with no killer to be found.” I don’t think I wrongly accuse him when I say that he seemed to be licking his lips with lust when I mentioned the murders. “Yes, it is a tragedy,” he said, “and these murders will never be solved—ever. Your writer, Conan Doyle, has written many good books about London, and I read your newspapers. According to them, barely two or three percent of all homicide cases are solved. Yes, London is indeed a remarkable city.”

It’s also very different. Unlike works such as Dracula in Istanbul which ripped off Bram Stoker’s Dracula and presented it in nearer-to-home locales, Powers of Darkness stays kind of close to the source material, while showing a pretty free hand in terms of translation. Ásmundsson jettisons most of Stoker’s tale – most of it takes place in Castle Dracula, with the London interludes presented in only the barest outline, as if the translator couldn’t be fucked to expand those chapters. The first part of the book is inflated by 63%, the rest of it reduced by about 90%, so it’s some sizeable variation from the story you know.

It’s thought that Stoker approved all the changes and collaborated with Ásmundsson on the book – though footnotes and accompanying essays can only surmise this (even as they’re busy detailing the ages of the team who helped retranslate the work, for some reason) – but I find it hard to imagine that Stoker would approve of the tonal-shift whiplash between Parts I and II of the work. They’re like completely different works – one’s full-figured, the other an elevator-pitch version of a story. It’s one of the strangest things I’ve encountered, and it’s even weirder that it was published in this manner over an extended period of time. I suspect Stoker provided copious notes, yes – but to endorse the final product seems unlikely (to me, at least).

Let’s get something out of the way. The four stars I’ve given this thing are not reflective of the work’s literary quality. It’s not well written, particularly in Part II’s “the dog ate my plotline” approach to things. The score, rather, reflects that the book is an oddity, a curiosity. It’s not like other things you’ll read – well, it is like Dracula but that’s not what I mean – and it’s this perverse singularity that earns the score. I’m glad it exists because it throws a different light on Stoker’s classic: it shows how it was translated into another language, another format, with bits taken away and bolted on. It’s a weird creation with more boobs and more ape servants and some name changes and no Renfield and an addiction to alliteration.

(We do, though, have a much more fulsome idea of what Drac’s castle was like, so check it out if you’re interested.)

Look, Powers of Darkness is worth a read, but only if you’ve read the original, or will do once you’re completed. It’s like a textual version of Total Recall‘s Kuato: a weird vestigal thing that exists attached to its more visible host, offering a different view. I’d take them both together, because by itself it’s a weird, stumpy thing. 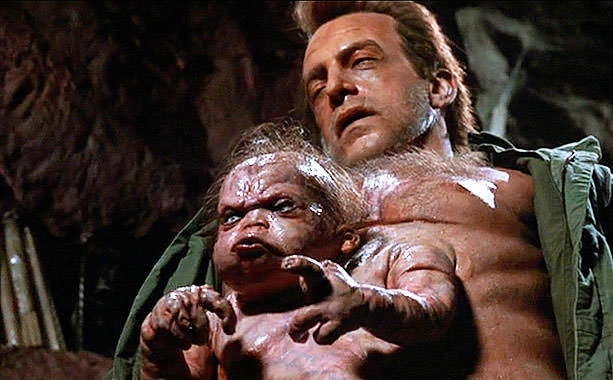 For me, having recently read the original and a variation on the theme, it’s a rewarding weird, stumpy thing, but then I am crawling out of a vampire hole, so my experience may be somewhat different to the casual reader.

I SEE YOU.
Two moods.
Quite the contrast.
Riders on the storm.