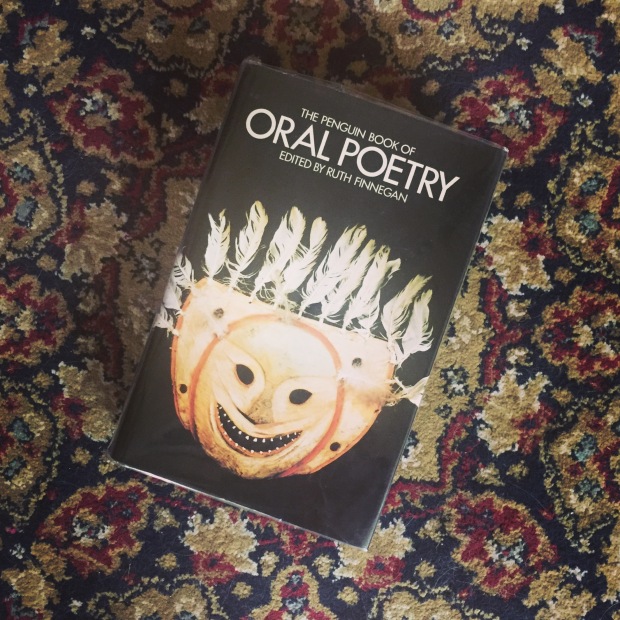 One of the things on my list is to read a poem a day. Every day. One poem. This is to counter the fact that though I like poetry, and though I spent four years at university reading books – some of which were made up of poems! – I still feel myself to be a low-watt bulb when it comes to poetry. It’s something I like, and have liked for a long time, but something I feel kind of stupid around, like I’ve turned up to a fancy restaurant in tracksuit pants.

When I was a child I had been brought books of poetry by my nan and my mum. I was aware of it, but was under the impression it had to rhyme and be pretty, which was probably fostered by some of the Louis Untermeyer-collated books on the shelf, or by the large amount of Gilbert and Sullivan played at home, which is a fine collection of tongue-twisting tales told trippingly, if you’re not familiar. Bush poetry hovered around the background, mostly in fatherly recitation. But I didn’t quite get my own feelings about poetry until I came across Edgar Allan Poe.

Poe’s work was something I discovered thanks to a pop-up book. A spread featured the setting of The Pit and the Pendulum, all angles and wide-eyed terror. It looked pretty good to me, aged about eight or nine, so I sought out a library copy of Poe’s work. It was here I discovered his poetry, and though I had to look up a bunch of the words (and have since realised that a lot of it is incredibly overwrought) I was hooked for life. I mean, have you read ‘The City in the Sea‘? DEATH LOOKS GIGANTICALLY DOWN was the most metal thing I’d read before I knew what metal was. Little did I know, but the language and settings of things like ‘Annabel Lee’ would influence not just the literature I’d like, but how I tended to feel about life. (Spoiler: melancholy, with a liking for (and fear of, somehow) the ocean.)

I somehow knew about ‘The Raven‘ already, and it has remained one of my favourite poems. Yes, it’s over the top but the way it flows is great, and it is one of the few poems I can recall fairly readily (though not completely). Normally I’d link its appearance on The Simpsons (which impressed because it didn’t change it too much) but really, you can’t go past hearing Christopher Walken read the thing.

Hearing Walken read it reminds me of one of my vivid memories of childhood: poetry recording. I had a tape recorder I’d been given for Christmas when younger, and on wiped data tapes from my dad’s work I’d record myself reading the poems in a little boy voice. Recorded by myself so I could hear the poems read aloud, because I knew that would be how they made sense.

I have no idea where those tapes are now.

The next poet that made an impression on me was Samuel Taylor Coleridge, though I can’t remember how I initially came to his work. I know, though, that a collection of his poetry was the first poetry collection I bought myself, and it’s still kicking around on my shelves. He was wordier than I’d imagined, but I dearly loved ‘The Rime of the Ancient Mariner‘, for all its spartan pomp, from the moment I read it. I keep thinking one day I’ll memorise all of it: for some reason it’s something satisfying to imagine being able to do.

The poems I’m reading each day come from a variety of places. If I’m short on time, then I use this daily poem page, which features  modern, previously unpublished work (and seems a good way to thread some currency through my home collection of usually dead, usually male poetic works). But mostly I’m wanting to use the project to work through my shelves of poetry classics, to read the things I’m supposed to have read. 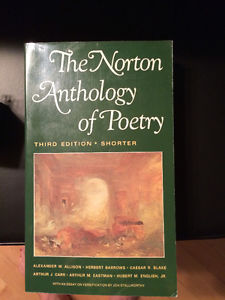 Pictured at the head of this post is the book I’m currently working through: a collection of oral-tradition poems that I picked up at a charity shop for $3. (I’m currently up to the Mongol section, and it’s basically Dothraki songs about tents, drinking and bows, so I’ve already had my money’s worth.) But the one I’m keen to work through is The Norton Anthology of Poetry, the millstone which weighed down my army-surplus satchel through my university career.

It’s pretty weird to consider that I first hefted the black tome over two decades ago (mine was the third edition, and it’s only just up to the fifth) but it was the source of so much of the poetry I studied that I feel quite affectionate towards it. The heading of this post is a Wallace Stevens description of poetry, and his ‘The Emperor of Ice-Cream‘ is one of the ones I remember pretty well, though I must admit I always considered myself a fan of William Carlos Williams’ simplicity.  It was my companion through many stuff lectures, a source of Augustan poetry, of snippets of Wordsworth and compatriots, a kind of tasting plate of poetic endeavour. It also introduced me to what I think is probably my favourite poem.

In a Station of the Metro
The apparition of these faces in the crowd;
Petals on a wet, black bough.

Fourteen words, no verbs and incredible imagery. I remember catching the train home from university after I’d read the poem for the first time,standing on the platform at Town Hall station watching the oil and dust-covered switchgear move, thinking it encapsulated everything, and everyone there. Pound, of course, is hardly a reputable guy: it’s not for nothing my best friend and I would refer to him as ‘Nazi Supermen Are Our Superiors’. But the grumpy old fucker could write with clarity when he wanted.

(I do have a copy of The Cantos on my shelf. Whether I’ll get through them is another thing, but they’re there in case I do.)

Pound appears to have been inspired by Japanese art and writing, which leads nicely to the other thing I am fond of: haiku. I remember having to write some of my own as part of an English class at school at some point, which seems to have cast a long shadow – I think I write best when there’s strictures applied to the task. But I enjoy the way haiku function as an explosion of meaning, like a mysteriously-filled chocolate. Sometimes subtle, sometimes unexpected, but always with more involved than appearances would suggest.

I don’t know as much about haiku as I’d like, outside of having read some Matsuo Bashō. I write my own, under the guise of cultural review, though I freely admit they’re not ‘real’ haiku – they’re exercises in brevity tied to an image. I write other forms of poetry – lines that make themselves the length they need to be – but I can’t shrug off the feeling that it’s all a bit adolescent. Still, it’s all work. I live under the perhaps mistaken belief that woodshedding eventually pays off.

A couple of years ago I took part in a taiko competition in Tokyo. We won, and returned the next year for a concert. As part of the fundraising for that, each participant had to write their own take on the trip, a story. I’d gone through a lot of things in the time between the two events, and I wanted to give that some kind of acknowledgement. I was reading haiku again at the time of writing, and Bashō delivered something that encapsulated my feelings, and more.

in my new clothing
I feel so different, I must
look like someone else

It’s become one of my favourites. I wish I could be so emphatically, knowledgeably gnomic.

How many syllables again?

So the reading project rolls on. Eventually, once I’m through the beginning tomes, I’ll move on to others I’ve always intended to read but haven’t completed: Dante, Milton, Blake. Wordsworth’s peregrinations through the countryside. Plath. Gunn. Dickinson. Browning. Rereads of Homeric epics. Anonymous heroic origin stories. Anyone. Everyone. It’s kind of exciting. I’m enrolled in this course to learn more about modern poetry – it’s free, so why don’t you give it a whirl? – and I’m listening to the new-but-good Poetry Says podcast to learn more about Australian moderns.

There’s a lot to get through, and I now have the drive that seemed mysteriously variant when I was actually meant to be learning the stuff.

I don’t understand poetry. I like its rules, but am not conversant in them. I like that it’s both hidebound to form and free of regulation, that it can be anything the poet wants it to be. I know that I’m probably not going to get it, but that that’s OK. How refreshing it is to be at a point where I can just take my hands off the controls and see what happens.