Photoshop is responsible for a lot of things. Most of them are bad, but in the case of this novella – written in response to the image which ended up as its cover – Adobe should be profusely thanked.

The world has a serious lack of stories about rampaging kangaroos. Even fewer of those involve exploding heads, multiple appearances of the phrase “shit cunt”, and can be read in about an hour. Alan Baxter has filled the void pretty well, here.

Also, there’s this in the introduction:

If you’re not too familiar with the anatomy of kangaroos, may I also suggest you Google ‘kangaroo feet’ before you start reading. Seriously, you might think you know, but have another look. They’re insane.

I’m uncertain whether you know this, but kangaroos can be big bastards. I mean, check out this unit: 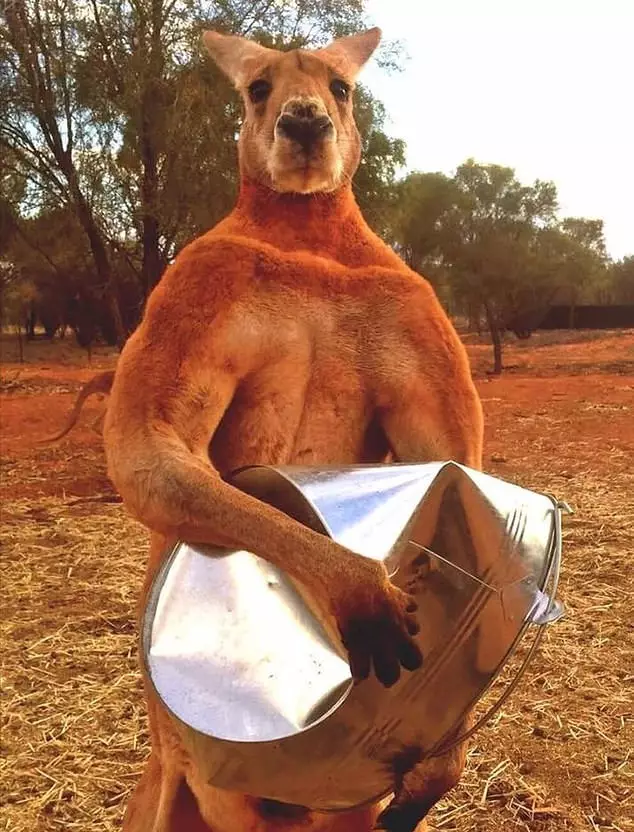 That’s a real-life town pest. All Baxter has done with this book is amped up the reality, added in a little bit of revenge and set it in the sort of tiny town in which I now live. He’s also shoehorned in some laughably horrible violence, and worked in a decent call for better work on domestic violence, a blight on all Australia, rural or otherwise.

What results is uncut ocker, pure Ozploitation. It’s an excellent thumbnail sketch of small town life, one that – murderous national symbols aside – isn’t really that far from the truth. Though the somewhat hamfisted way the small townsfolk deal with a rampant roo is pretty understandable if you bear in mind that we’re the nation that started a war against our other national symbol and lost.

The writing is snappy, and there’s a distinct sense of fun through the horror. I imagine this was a blast to write, and there seem to be a number of little gems buried for attentive readers to grab – am I the only one who thinks the town’s name is paying tribute to the Sheik of Scrubby Creek himself, Chad Morgan?

Ahem. Anyway, if you were looking for some knifey-spooney level Australianisms, they’re thick and fast here, though not always in their time-honoured format. I suppose substituting a dingo’s dick for a donger – while borderline unAustralian – is necessary to keep OS readers in the loop. (Thankfully, there’s a glossary at the end, just in case you are baffled by boot-rooting bastards and Akubras.)

“Fucken hell,” John breathed. “That’s the biggest fucken roo I ever saw.” He giggled, maybe a little more drunk than he had first allowed. “Go on, Skip!” he shouted. “Go on, fuck off!”

Make no mistake, this is Ozploitation at its finest. It’s also ridiculously fun. It is as Australian as, well, football, meat pies, kangaroos and Holden cars – all of which appear within, I think – and is peppered liberally with swearing and hearts of gold. There’s an acknowledgement of how hard life can be in rural societies, and the troubles that are passed on.

I loved it. I’m amazed this hasn’t been made into a movie by Netflix, those Sharknado people, or even Peter Jackson if he ever deigned to get back to practical effects, fake blood and anything hobbit-free. This is a ball-tearer of a popcorn read, costs less than a fiver on Kindle and is likely the most fun I’ve had reading all year.