The Walking Dead Compendium 4 by Robert Kirkman.
My rating: 5 of 5 stars.

So this is where it all ends. The final instalment in the saga of The Walking Dead, in which a bunch of favourites will die, and the world will go on.

Or will it?
This collection gathers together the remaining issues, 145 to the surprise conclusion of 193. And while I’ve occasionally felt that the writing in the series has had some problems, this run of issues is strong, and the team certainly stick the landing. Pleasingly, it doesn’t feel too rushed, nor does it feel too drawn out.

Of course the dialogue is stellar.

The pacing as we lead towards the end – planned for a long time by Kirkman, at least according to the afterword – seems to pick up. Things become tighter and there’s a sense of motion, of urgency.

As with the previous compendium, Rick is an elder statesman, or at least what counts as one in this zombie-flavoured land. He’s making bigger decisions – about communities, and about what type of people survivors should strive to be – but there’s always an undercurrent of dissatisfaction, of factional politicking. People like him, people don’t like him, but there’s always an element of bigger picture in his life now. 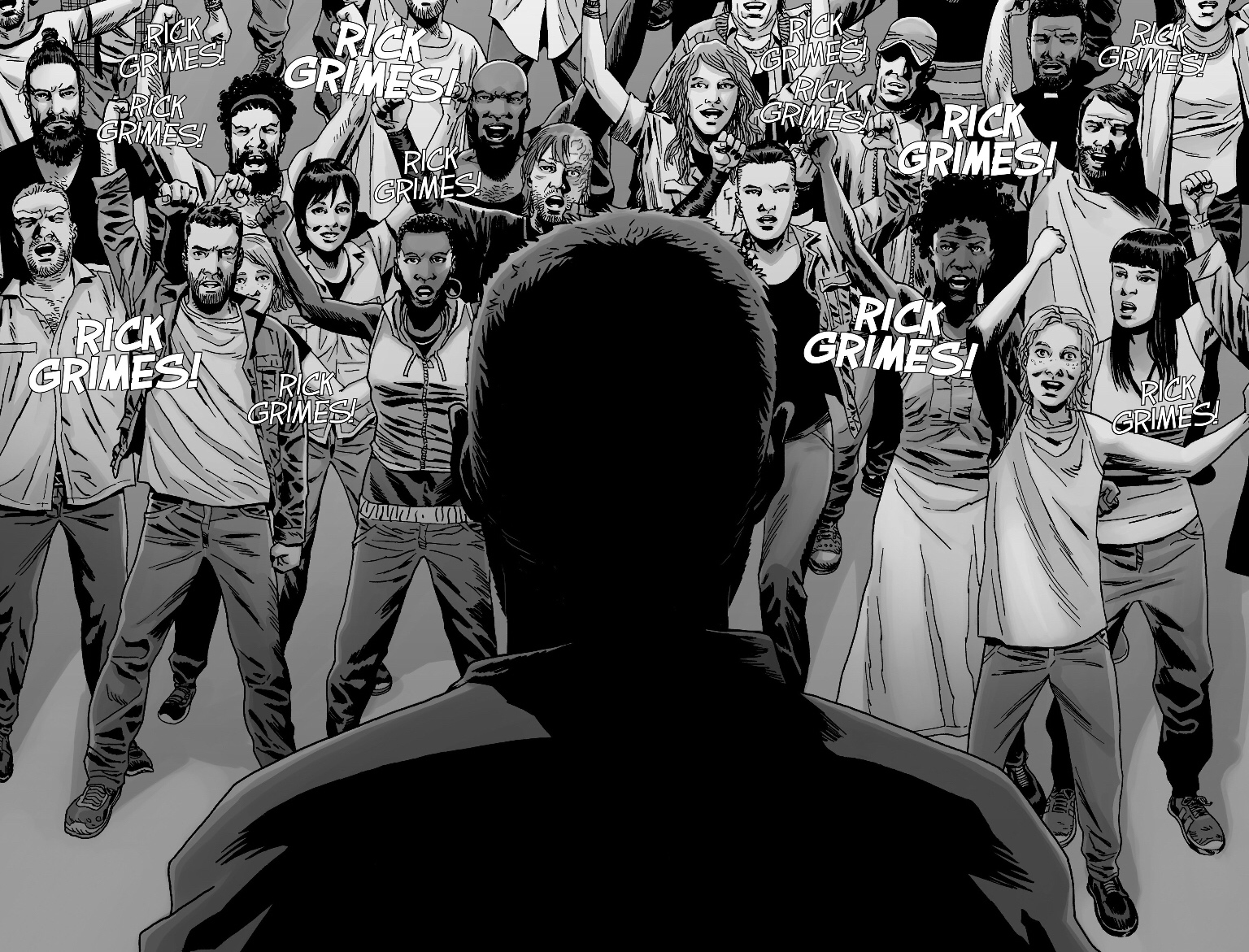 Except… there isn’t. The story explores what happens when someone who has worked to move away from the savagery of killing killers is forced back into the position where battles are required. Indeed, Grimes’ cohort are forced with threats they have to treat with a military mindset: mere skirmishes aren’t going to cut it. But how do you engage in such offensives without undermining the semblance of community, of morality that you’ve already constructed? 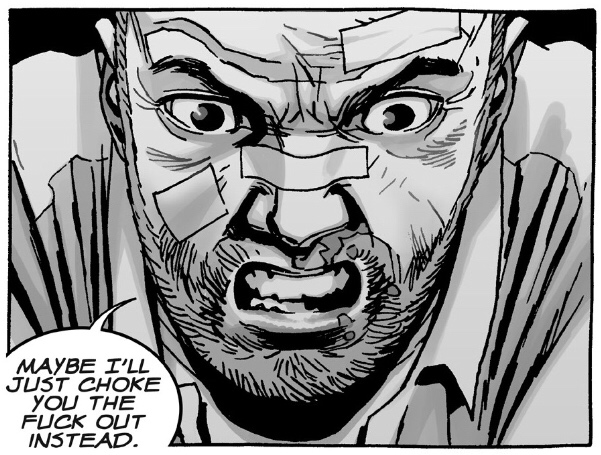 How indeed? And how do those communities negotiate with other, larger communities? What sort of a society can rise from the ashes of a fucked world?

There’s plenty of callbacks to earlier incidents through here, and the sense of personal growth – in Negan, in Carl, in Michonne, in many characters – is palpable and welcome. It’s been a long trip and so it’s good to feel the sort of affection that Kirkman obviously has for his creations. But there’s also the spectre of death, and you can be sure that there’s some that won’t make it through to the final pages. There’s a real feeling of tension, and an effort made to if not to completely explain the actions of some characters, to provide a fuller sense of what made them the way they are. 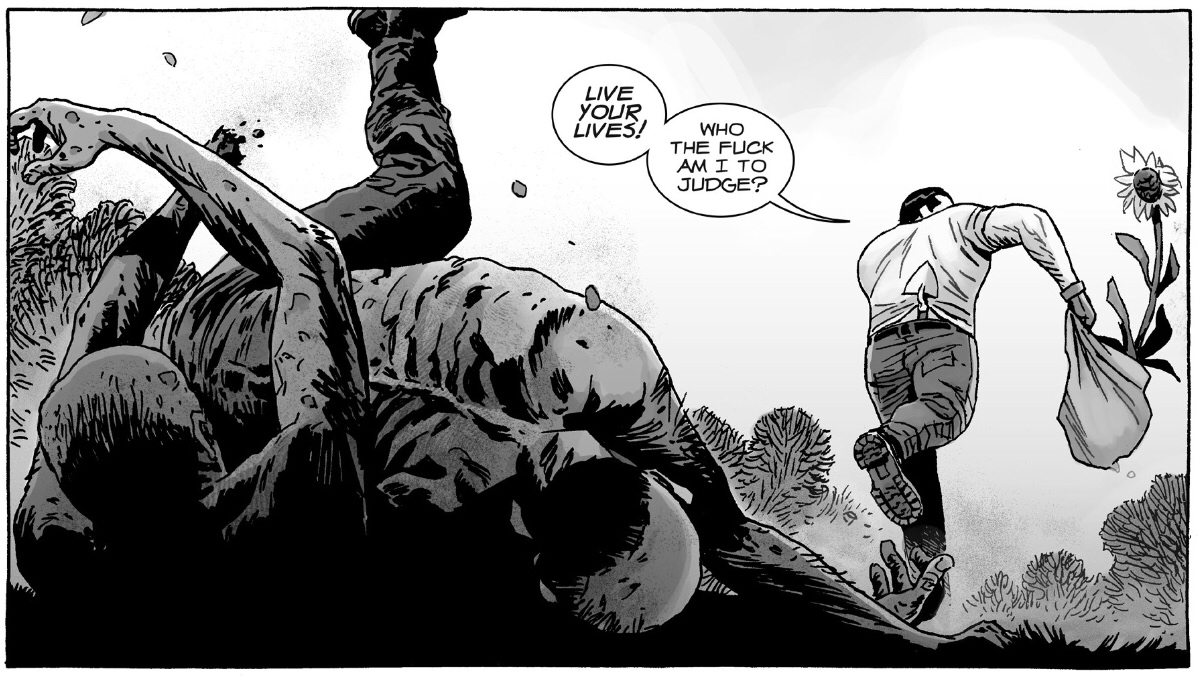 Except this. I still have no fuckin’ idea.

The story is worth a read, but particularly satisfying is the flash-forward that occurs at the end of the major tale. We get to see what the world looks like a couple of decades in the future, and whether that’s a happy ending. 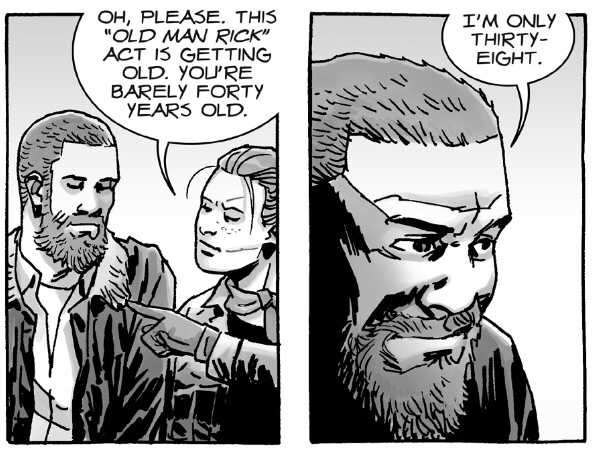 Old man, look at my life. I’m a lot like you… except I have all my limbs and am not avoiding flesh-chewing revenants.

I’ll leave it up to you to find out, but I was satisfied, at least. And after more than 4000 pages of brain-chewing action, that’s a pretty good result.