The Walking Dead Compendium 1 by Robert Kirkman.
My rating: 5 of 5 stars.

After last year’s surprise conclusion, I figured it was probably time to check out The Walking Dead. I mean, it’s the source material for the TV show of the same name (which seems to be no closer to ending than ever), and a bunch of video games.

A tale as old as time.

Luckily, the series’ publisher has released a number of compendiums – four in total – which collected huge chunks of the narrative in sequence, in 1100-page whoppers, echoing the Cerebus books in knee-breaking size.

Good job I’m reading on a tablet, then.

This first compendium covers the first 48 issues of the series, and covers a large amount of ground. We’re introduced to Rick Grimes, a cop in a coma, who awakens alone in a hospital after an unspecified event which has made a world of zombies. 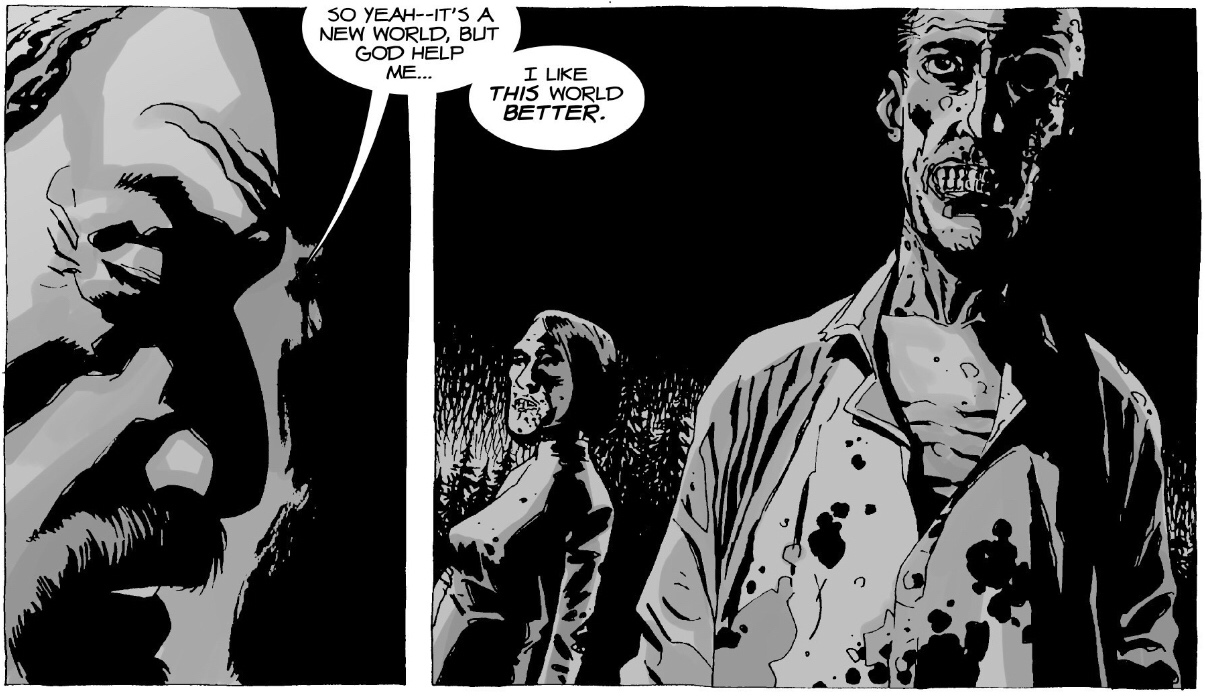 Well, people want to talk to you less, which is something I can get behind.

If you’re half familiar with the series, you can probably imagine what comes next: exploration, finding family members, finding survival buddies (and losing them) and, of course, killing zombies. 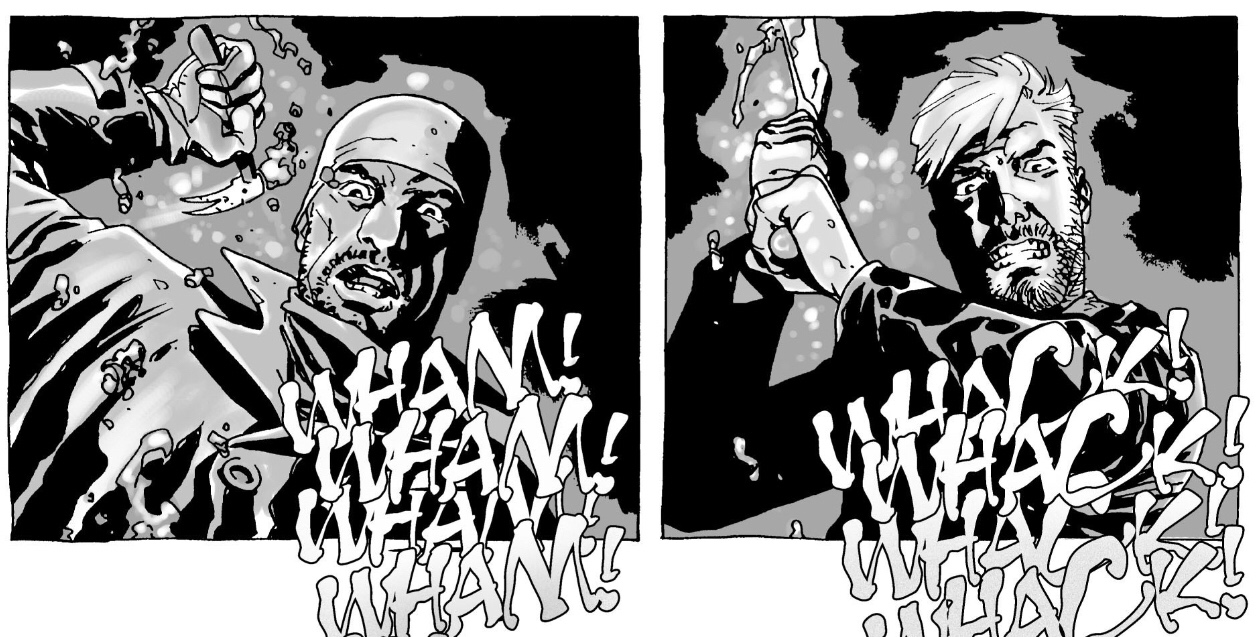 Lots of zombies. Lots of killing.

Though I’d laboured through a couple of series of the TV show, I lost interest after a couple of seasons as it didn’t seem the narrative developed the characters very much: they kept falling for the same problems, the same traps. This, I suspect was a function of having so many hours to fill: a problem the comic series doesn’t have.

My familiarity with the TV version of the story (up to a point) meant that while some of the story – the prison sequence, the Governor – were known to me, but the differences between the source and the adaptation meant that I was never assured that things would work out the same way. My interest was kept up, and the story – though equally gruesome – proved to have a lot more focus on personal struggle. There’s a lot more about coming to terms with the situation – with adapting to the world as it is now – than I’d expected, and it’s conveyed with more subtlety than I’d imagined.

The big surprise for me was that the comic is in black and white. Telltale’s games had made me assume it was colour, for some reason, but it makes more sense this way, especially with the knowledge that the series was originally pitched as a sequel to Night of the Living Dead: the dramatic shadows and blocking have a cinematic feel that just works. 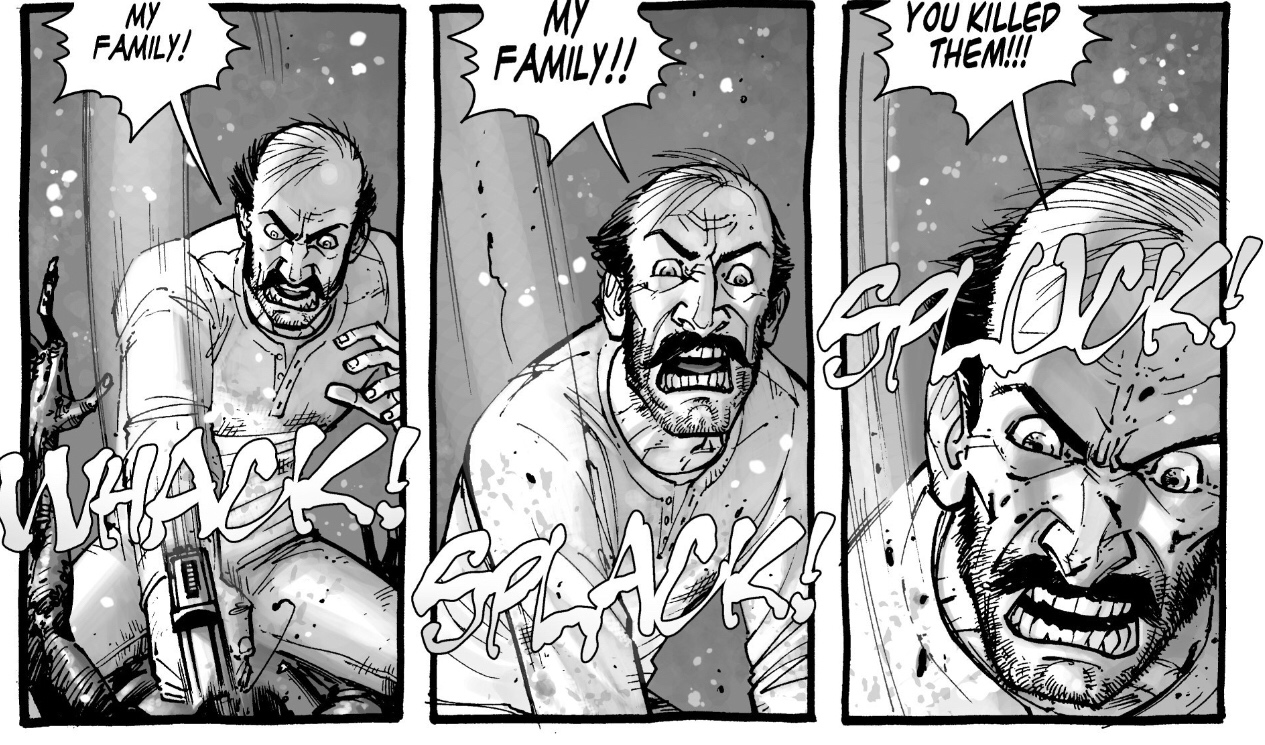 Whether the interest holds up over the rest of the run remains to be seen, but this volume was great. Its mix of tension and introspection – yes, and gore – dragged me in and didn’t let go. It’s easy to see why the series has been so successful. I can’t wait for more.