Salvation on Sand Mountain: Snake Handling and Redemption in Southern Appalachia by Dennis Covington.
My rating: 5 of 5 stars.

Ever since I’d first heard of its existence, I’ve wanted to read Salvation on Sand Mountain. This is, of course, largely because Younger Me was pretty obsessed with the outré nature of its subject – churches whose adherents practised snake handling – which I admit is a pretty rubbernecking approach to something. 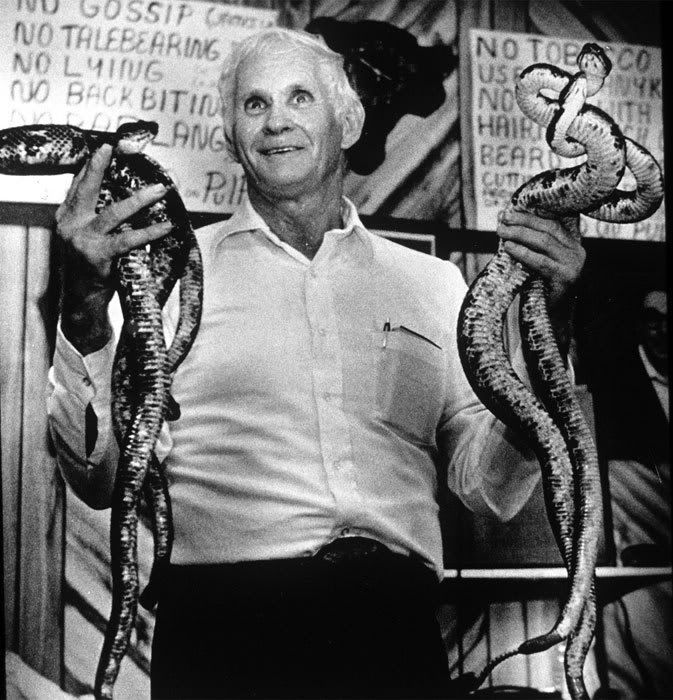 Yeah, no reason why I’d be like HOLY SHIT, CHECK THIS OUT at all. (Picture: Jim Neel.)

I finally – some 20-something years later – managed to read the book and discovered that while there was plenty of snaketacular narrative to go around, the book is more rewarding that my youthful self, labelling of it as churchy hicks with scales could ever have imagined.

Of course, there is plenty of oddness. I mean…

The first time I went to a snake-handling service, nobody even took a snake out. This was in Scottsboro, Alabama, in March of 1992, at The Church of Jesus with Signs Following. I’d come to the church at the invitation of one of the members I’d met while covering the trial of their preacher, Rev. Glenn Summerford, who had been convicted and sentenced to ninety-nine years in prison for attempting to murder his wife with rattlesnakes.

If you don’t want to read the book after that introduction, there has to be something deeply wrong with you. Another sample?

She started suspecting things weren’t right between her and Glenn when he broke her mother’s jaw with a vase at a family dinner and when he hit a brother-in-law over the head with a pair of vise grips shortly after that.

Covington’s writing is taut, rarely florid, conveying the essential strangeness of the world he’s documenting by shying away from hyperbole. It’s the talk of someone who’s from the country: shying away from embellishment. Stating it simply, and keeping something in reserve, allowing the occasional dazzling moment to shine forth.

When the snake slowly moved in and out of Brother Carl’s fingers, bits of shed skin fell to the floor. The snake appeared to be in the process of reinventing itself, forging a new self out of the old.

What’s in reserve is Covington’s personal connection to all this, which is revealed as the pages turn. His background is shared with his subjects: he has religion, and he’s suffered in the way many of the adherents in the book have. Addiction and hard times inform his story, and his growing absorption into the word of snake handlers and strychnine drinking sees the book’s focus creep from documentary to autobiography: through his coverage of the church, the author journeys into himself, and faces more than one reckoning. It’s the journey from the observer to the observed.

“The Bible says Jesus won’t come again until the gospel’s been published in every nation,” he said. “So you just go ahead and write that book. As long as you tell the truth, it’ll be edifying to the body of Christ. It’ll be like you’re spreading the gospel, won’t it?” I nodded. But I wondered if Brother Carl knew then about the inevitable treachery that stood between journalist and subject. I wondered if he was ready for the dance that would have to take place between him and me.

Where other authors may have wanted to glamourise or exaggerate happenings for effect, there’s a sense here that Covington desires to keep things scraped clean: to present things as they happened, including the occasional touch of something that may be the Holy Spirit.

Sister Barbara Elkins, the ailing matriarch, had shown up with a fruit jar of strychnine solution. She had mixed it herself. “She mixes it strong,” Jeff Hagerman said to me. “If you get scared or get your mind off God, you start to feel it.”

The writing drew me forward through the book – and it’s definitely a book you can knock over in one session, once you get on a roll – on its journey from standard-issue coverage of court proceedings to a personal crisis. Always, there’s something which makes you want to read more. Covington’s narrative takes personal details which may have appeared self-indulgent in other hands and traces them to snakes and poison, to church and tongues, to a South in decline and a people forgotten.

But even as the hairs on my arm started to stand on end, the voice turned into something else, a sound that had pleasure in it as well as torment. Ecstasy, I would learn later, is excruciating, but I did not know that then.

Of course, the danger of the setting is present, all the way through the book. There’s a good amount of historical information in here – enough to give you a sense of setting, but not enough to turn the read into a slog.

To date, at least seventy-one people have been killed by poisonous snakes during religious services in the United States, including the man said to have started the whole thing, George Went Hensley, who died vomiting blood in a shed in North Florida in 1955.

But as well as this care to explain how these traditions have formed as they have, there’s an overwhelming sense of respect in the text for the procedures and practitioners both: there’s no cynical detachment. There’s observation, and a form of love – love which makes some of the book’s more dramatic moments particularly painful to ride along with.

“I’ve been hurt before, many times, Brother Dennis,” Charles says. “Let me tell you, the bite of the serpent is nothing compared to the bite of your fellow man.”

This edition featured an afterword covering the way the book came to be. It’s a useful update, and telling because, despite his connection to the subjects, Covington has chosen to not look back. This chapter has him, years later, explaining how the book took the form it ultimately did, and it’s illuminating.

For me, this is a book I’m glad to read now, rather than when it first crossed my radar. It’s so much more than just hicksploitation: it’s a eulogy for a particular kind of life, and a meditation on the pain of faith. 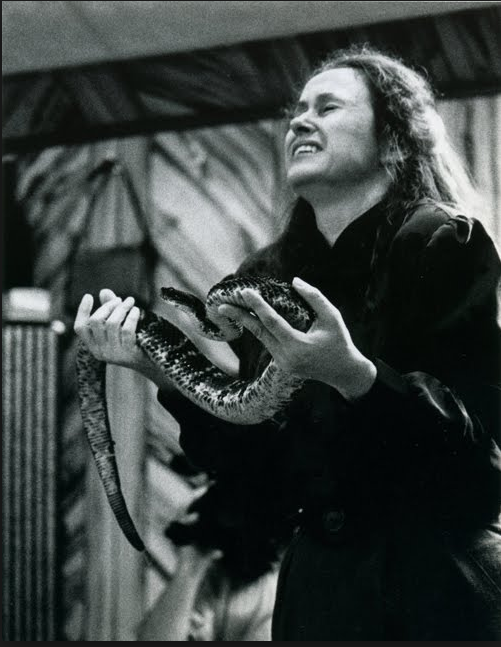 It’s wonderful, even if you don’t drink the strychnine.