Turns out Zweig’s writing is much more than just the inspiration for some lovely cinema. Journeys is a collection of the writer’s work, translated by Will Stone, spanning four decades, all of which specifically relate to travel.

Wait, I’m selling things short again. To view these essays as mere travelogues – though you can certainly do so, and they function well as same – is to ignore the amount of portraiture that’s expressed in each essay. We learn just as much about the inveterate traveller penning the pieces as we do about the locales he’s considering.

The youthful essays are not as accomplished as the later selections, but there exists in Zweig’s portraits of Ostende and Bruges a sense of longing; of wishing. He’s keen, here, to express something other than just a recitation of place: he’s grasping for the fabric beneath the streets. This desire can be seen, much later, in his post-war account of an Italian visit: behind the walls, beneath the cobbles is a vitality, a force that entrances the author – one he exhorts his reader to experience, even if you have to give up cigarettes to do so.

Elsewhere, Zweig touches on the mystery of Hyde Park, on the necessity for shelter for the stateless, and on the transformational role of gardens. He charts the nervousness of post-war travellers, and the lack of certainty that came with the transition from his youth to the aftermath of two meat-grinder wars. And most importantly, he focuses on things lost: nowhere is the author more beguiling than in his description of the Hotel Schwert, or more forceful in his condemnation of the short-sightedness of decision-makers.

(It’s not his generation that’ll suffer, after all: it’s those who come after. )

This limited view is something returned to. Visiting Chartres cathedral, Zweig frames his lament in an uncomfortably familiar way:

“We who thanks to a spark are capable of communicating with another continent in a second, we no longer know how to articulate our being across the slowness of stones, the infinitude of years. Our miracles are manageable and intellectual, our dreams more compact.”

Imagine if he’d seen the Internet. 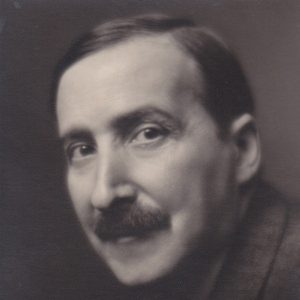 The innocence of a man who never had to see Reddit.

Increasingly, there’s a grim tone to the pieces dating from after WWI. But they’re not filled with a feeling of hopeless pessimism. Rather, Zweig focuses on the role remembrance places in positioning us in life, and in (hopefully) ensuring that horror doesn’t repeat itself. He is – as a beleaguered Jew and survivor of two wars – of course aware that repetition is what humans do. But he does express hope, however dark: that we can do better than war. Hell, that we can do better than guided tours, even.

It could well be that, knowing the endpoint of Zweig’s life – spoiler: he and his wife committed suicide in the early 1940s – I’m more likely to seek out moments of tragedy, or shadows of darkness in the text. It’s undeniable that his later writing takes a more darkly pensive turn, and understandable when it’s considered that the man lived through two world wars and was forced from countries as a result of them.

(Sure, it’s bad enough to have to flee the Nazis, but to then be moved on from your new home because you’re now considered an enemy alien? How much can someone take?)

Again, it’s natural, given Zweig’s biography, to focus on the darkness of both the period and his life. But this is something I’d caution against, because to do so would be to miss the joy of his turn of phrase. And, more importantly, his belief in the importance of individual experience at the hands of coincidence.

“We want to interrupt a life where we merely exist, in order to live more. So, to be ‘travelled’ in this manner, one must be content to pass before numerous novelties without actually experiencing them at all; all the strangeness, the distinctiveness of a country will utterly escape you as soon as you are led and your steps are no longer guided by the real god of travellers, chance.”

I’m not a German speaker, so I can’t rate the accuracy of Stone’s translation. But it flows nicely and doesn’t seem overly stilted, so it’s a good result for a neophyte reader. The introduction is fine – it’s general, and given the overall length of the work, is short enough to convey the necessary information without wearing out its welcome – but Stone’s included photos of a selection of some of Zweig’s subjects seem an afterthought. (And poorly executed: what’s the point of including some places but not all? C’mon.)

Journeys is a brief book, and it’s the sort of thing that can be inhaled in an afternoon. It’s not a fun read, by any means, but it does contain important moments of joy, even amid the ruins of war. It’s a book that’s suffused with a humanity that surpasses many: it’s testament to Zweig’s inherent inquisitiveness, and to the transforming power of observation and travel. It’s a book that will make you look for a valise and a long weekend, assuming you can stop thinking about our penchant for destruction.

This ebook was supplied by Netgalley in return for an honest review. Good on ‘em, I say. And good on Pushkin Press, too, who I’ve supported long before this.