Going Clear: Scientology, Hollywood and the Prison of Belief by Lawrence Wright.
My rating: 5 of 5 stars.

Having recently read Bare-Faced Messiah, the landmark biography of L. Ron Hubbard, I was already aware of how much dickbaggery was behind Scientology.

What I was unprepared for was how much dickbaggery persists in Scientology. That’s where Lawrence Wright’s book excels: highlighting exactly how fucked up the current organisation is. And how much of that is down to one guy. 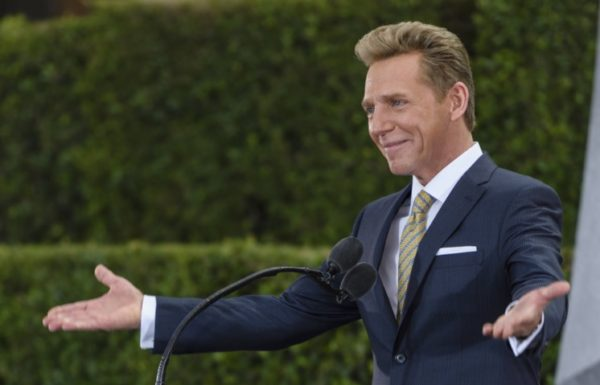 Imagine Johnny Bravo but without the style and class. And about four feet shorter. And missing a wife.

The one guy, of course, is David Miscavige. A man born into Scientology. A guy whose best friend is a a Hollywood actor. A guy who successfully kept the religion’s founder away from the rank-and-file before his death, long enough to consolidate his own power. And a guy who has ruled the organisation with an iron fist and steered it through beefs over taxation status towards levels of wealth unimaginable to even Hubbard himself.

Hubbard’s life is recounted, and the formation of the religion is clearly outlined. But the strength of this book is in its examination of the arcane business dealings of the church, and the secretive, sometimes violent strictures that are applied to all those who come under the organisation’s remit.

Seriously, though, no matter how terrible you might think your bosses have been in the past, they’ve nothing on Miscavige and co. (Chances are you haven’t had to sign a billion-year contract like members of the Sea Org have, which is undoubtedly a Good Thing, because a billion years of David fucking Miscavige is a long reaming to sit through.

While the book offers a considered view of the rapacious nature of the Church’s business – land-grabs and secret bases, celebrities and surveillance – it also gives the reader the viewpoint of those who have become disenchanted with the church, such as producer Paul Haggis, or several former members of the organisation’s executive arm. But these stories of the ramifications of leaving – or “blowing” – the religion aren’t simple tales along the yeah-this-sucks-now-I’m-out manner. Nor are they bitchy jeremiads aimed at a former spiritual lodestone. Instead, we have considered, behind-the-scenes stories about how the religion changes people, and how disentanglement comes at significant cost.

(The role of celebrity – and the seeming entrapment of same – in the service of Scientology’s grown is considered at length here, too. It’s not just regular schlubs who are ensnared.)

Wright’s footnotes are exceptional. There’s receipts for pretty much everything – and I mean everything, as even the most minute snippets of a quote are sourced – and they offer a treasure trove of resources to pursue should the mood take the reader. This is an impeccably-researched work, and the amount of rigour on behalf of the author – and candour on behalf of his subjects – benefits the reader.

The version of this title I read was a later edition, and contains many Church of Scientology rebuttals (well, denials, mostly) of Wright’s contentions, particularly those regarding imprisonment and physical assaults. It speaks to Wright’s belief in the material (and keeping of receipts) that their inclusion does not diminish the strength of the thesis: that Scientology, as it exists today, has a rotten structure that visits terrible harm on people, often at its highest echelons.

Going Clear also exists as a filmed documentary. I’d managed to watch it before reading the book, so I knew what I was in for – but even so, I was amazed at the depredation people would allow themselves to be subjected to in the name of their faith. This is a supreme bummer, and not a book to be read if you’re in a dour cast of mind. The writing is great, but the subject is a difficult one – but it’s one that is essential to examine.