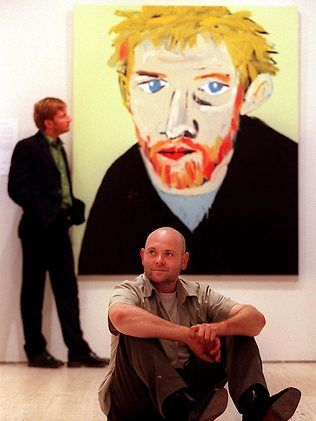 I’d seen his Archibald winners (and non-starters), but hearing him constantly referred to as an enfant terrible or similar made me a bit leery of learning more. And then he died, and at least some of the obits made me think there might be a bit more to the story.

Fast forward a couple of years, and the movie based on this book, Acute Misfortune, shows up. I catch it because of Daniel Henshall’s phenomenal presence, and decide I have to read the source. So here I am. And bugger me, but the book’s just as good.

(That said, if you’ve read the book but haven’t seen the film, seek it out. It’s brilliant, and brings to life the struggles within in a quietly grim way. I wrote about it here.)

The book is a description of the author’s interactions with the artist, which include stints in hospital, shootings, road accidents, endless phone calls and the offer to write a biography that never appears to have existed. Erik Jensen is as key to the story as its subject, and indeed appears to be interwoven with the emotions and struggles of Cullen, even when he’s moved cities to get away from the guy.

It’s hard to consider this work a biography, because it doesn’t stick to the regular biographical format. It doesn’t present a steady stream of dates, nor does it truck with the sort of minutiae which most biographers sprinkle throughout, like wheatgerm on cereal. It’s a portrait of an artist, but it’s about motivation, about drive. The art is secondary, really. As Jensen notes in an email exchange here, he’s not trying to write a worshipful portrait. It’s as if he’s trying to squeeze the marrow out of his subject: not to explain what he is, but to present more of an idea of why he is.

The book I am writing contains, I hope, no myth. It is a story of abused talent and excess pathos. It is an account of a man whose lifetime of bravado exhausted him and alienated those around him, but in whose gentle nature there might be some explanation for this impulse. All journalism involves the Sisyphean task of trying to understand other people and in this I have been dealt a boulder called Adam.

And as such, it’s remarkable. Jensen was 19 when he started taking notes for the non-existent tome Cullen had charged him with writing, and though the youthfulness – naiveté – of that age isn’t all that present in the book, a drive to explain, to know that’s common to early adulthood is. There’s a sense throughout that Cullen is somehow trying to tutor Jensen in his road warrior lifestyle: this is a guy who referred to himself as Mad Max, after all. But there’s no way anyone – not even Cullen himself – can keep up with the intoxicant intake and relentless, blazing grimness of the artist’s point of view.

The art is written about, and it makes a lot more sense to me now, I suspect. It makes a lot of sense that Cullen’s portrait of David Wenham is painted as Brett Sprague from The Boys rather than Diver Dan from SeaChange – the horror of the suburban, the defeat of the everyday is key to the artist’s oeuvre. His work, as Cullen freely admits, is all surface: what you see is what there is. And yet, his skill is in making you want to see more.

The truth is that by the end – hell, even before that – all there is to Cullen is addiction, anger and sickness. Even the art falls away, really. And so all there is is all you see: a sick, dying, then dead man, ravaged by the drives he couldn’t explain too well, much less control. A guy who couldn’t be his father – the flirtatious builder bloke – as hard as he’d tried. An artist. A fuck-up. A bad friend but a good quote.

“It’s the only profession in the world where your employer wants you to die.” I think, in this strangely griefless church, it is perhaps the most honest description he gave of his career. I count up the art dealers in the room: there are four.

Am I misreading it? Reading too much into it? Could be. But the book is great, and a quick read. I wish it were longer, but then I suppose so does Cullen.