100 Bullets: Brother Lono by Brian Azzarello and Eduardo Risso.
My rating: 4 of 5 stars.

Turns out you can’t kill an enormous hard-arse that easily.

I mean, we’re talking about Lono here – assassin, arsehole and walking slab o’ beef – so it shouldn’t be surprising that he’s still alive.

We’ve all been to malls, Lono.

He wasn’t exactly comprehensively erased during the course of 100 Bullets, so it makes sense that his story didn’t conclude in the dying issues of the series.
In Brother Lono, we discover that the human headbutt staggered into a small church in Durango, Mexico, bloodied and beaten. He gives the padre a shocking confession, and proceeds to spend a couple of years under vow: working for the church and attached orphanage, a dogsbody with fists the size of one’s head, trying to forget his past, or at least work on why he should be. 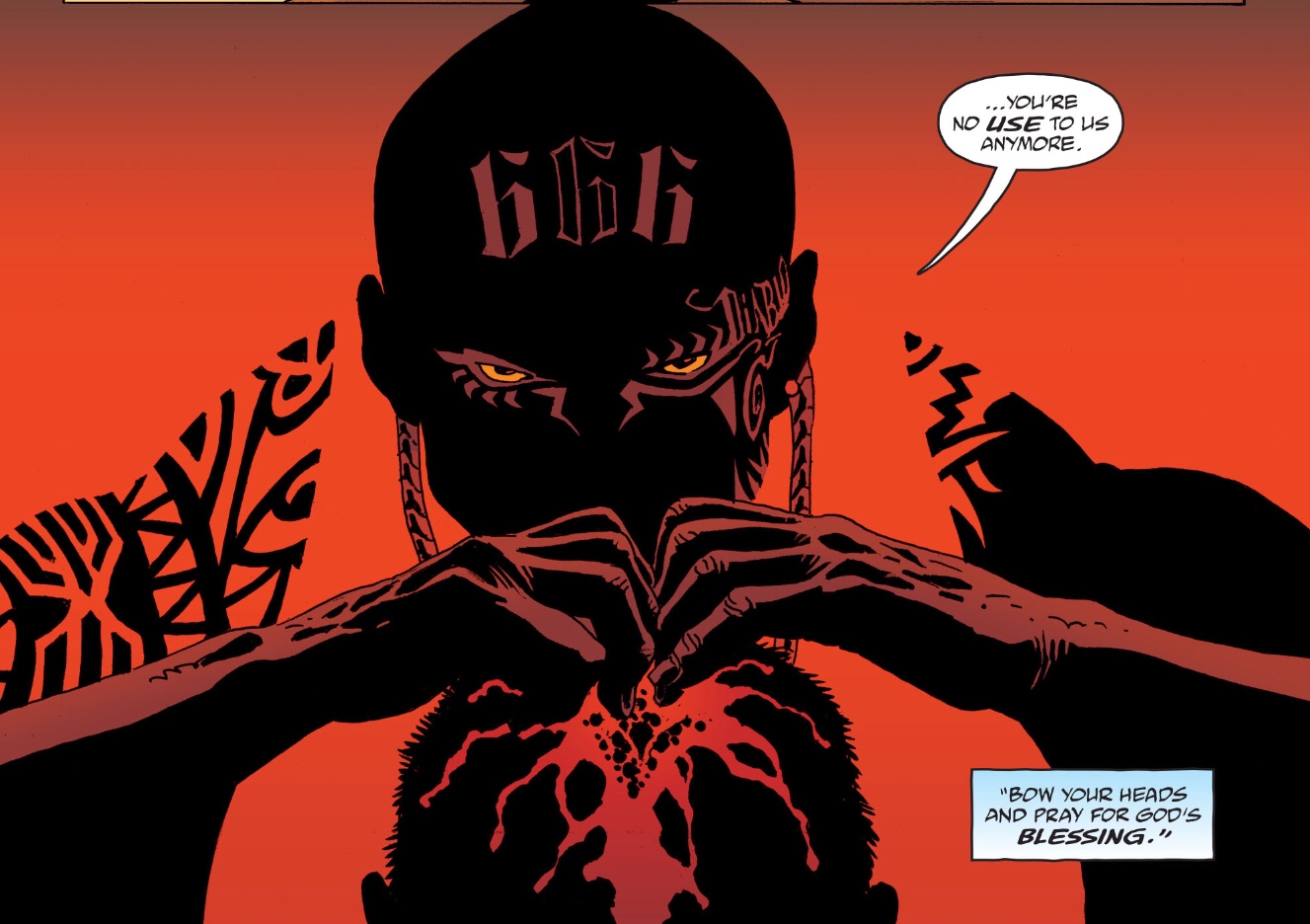 Of course, being Lono, there’s no way trouble can avoid him. And in a world of cartel cabals and gang-bangers who rule the roost with multiple murder, you know trouble’s coming in a big way. Secret agents. Drug deals. Wife-fucking threats and a copious amount of blood.

Ultimately, despite Azzarello’s gleeful exploration of the thug’s fistic arts, there’s an underpinning of questing to this work: to figure out why the world is who it is, and to figure out who deserves punishment – whether they receive it or not. Hubris looms large in the fates of several characters, and the idea of redemption is always by the ropes, goading on the leads as they work towards their ends. 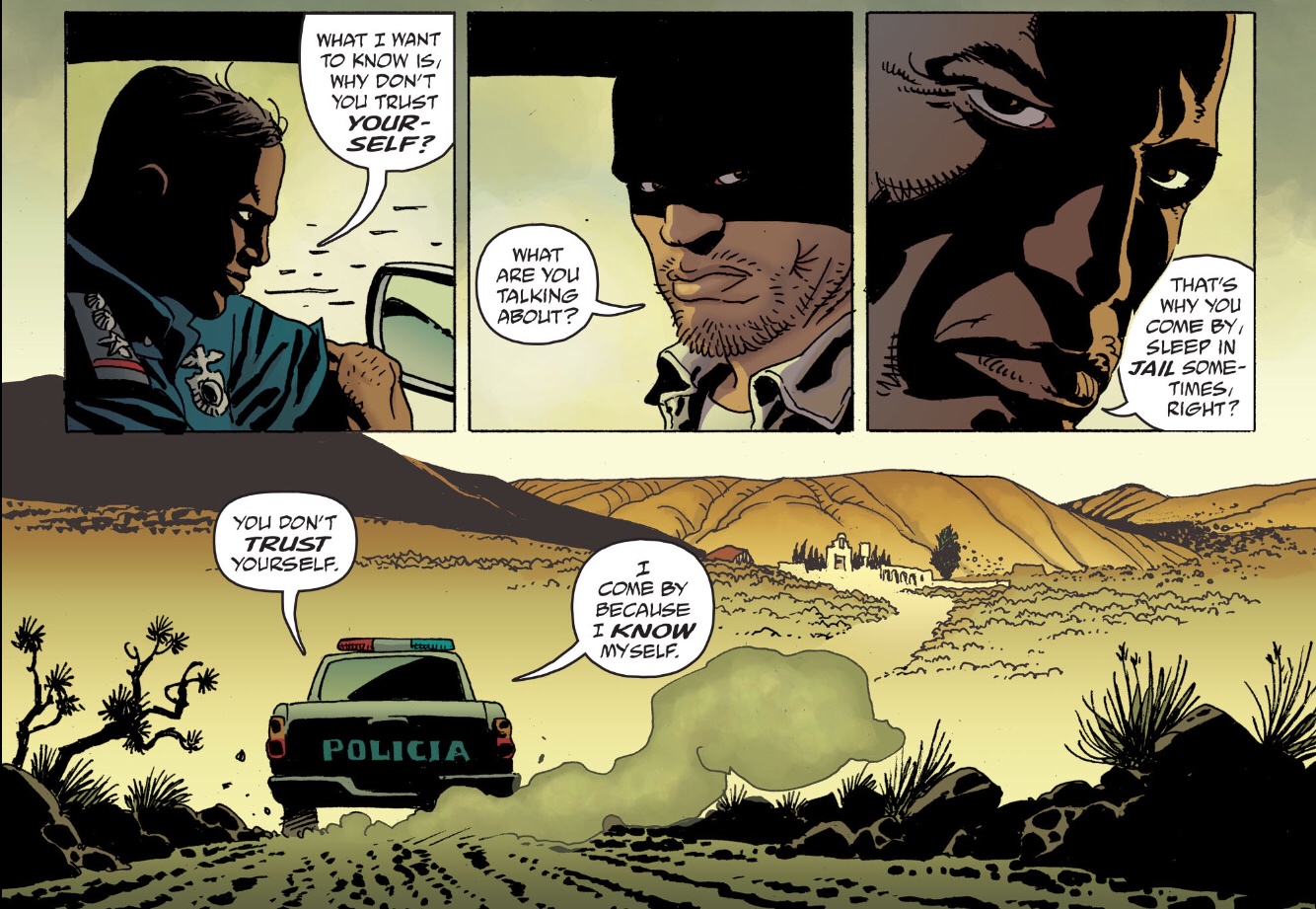 Is it as good as the mainline 100 Bullets entries? That all depends on what you’re looking for. If you’re keen on backstabbing and devious planning, then that’s here, sure. It’s not as sophisticated as other Minutemen-heavy storylines, but it’s present. Are you looking for intricacy, for a tangled web? Not so much. But if you’re looking for some ridiculous violence, and a sense of Bad Dudes Getting What They Fucking Deserve?

Enough time has passed since I finished reading 100 Bullets earlier this year for me to approach this book on its own merits. It’s throwaway, sure, and certainly a little bit of fan-service, but fuck, who doesn’t want to see the inhuman Lono crack heads? It’s what he’s for, after all.

INTO MY VEINS PLEASE.

(He’s certainly a more interesting character to follow than some of the others in the series. Admit it: you know it’s true.) 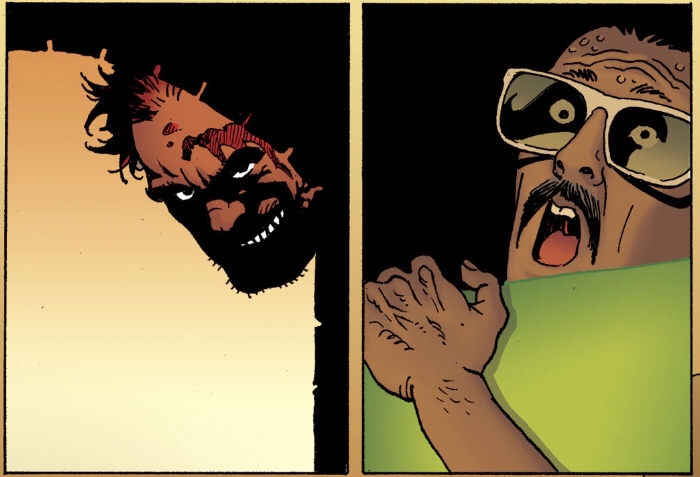 Get down in the dirt. You’re already grubby if you’ve read this far.