Journey to the Centre Of The Cramps by Dick Porter.
My rating: 3 of 5 stars.

So you should all know that Erick Purkhiser and Kirsty Wallace – or Lux Interior and Poison Ivy, to give them the names by which the world most readily identifies them – were The Cramps. You know: the band that invented the term psychobilly (even if they didn’t think they had much in common with the double-bass music that ploughs that furrow today), who were often written off as a novelty act (because monsters) and who were stalwart protectors and exponents of the history and primacy of rock and roll.

They were teenage werewolves, dabblers in mystery (occult and chemical), bump-and-grinders, a gang, and – perhaps the most notably of all – inseparable lovers. It’s this last item that Dick Porter is keen to underscore in this updated version of his Cramps biog, and rightly so: from a hitchhiking pick-up, it seems a band was always on the cards for the pair, not because they had an especial talent to do so, but because it seemed to fit them like a PVC glove. The Cramps existed as an extension of the peccadilloes of the pair, with everyone else on the stage – no matter how talented or long-tenured – a distant second.

That’s all the Cramps is – a folie à deux.
-Poison Ivy

What comes across pretty plainly is the fact that both Lux and Ivy were obsessive transgressives. They were into unpopular and forgotten shit and schtick. They loved the stranger side of life, though not nearly as cartoonishly as some detractors would suggest. There’s a serious amount of study – of rock’n’roll, rockabilly, custom cars and monster movies – that goes into the Cramps, and Porter is keen to convey as much of it as possible. Thankfully, their larger-than-life personalities were enough to make me keep reading. This is, after all, a love story. 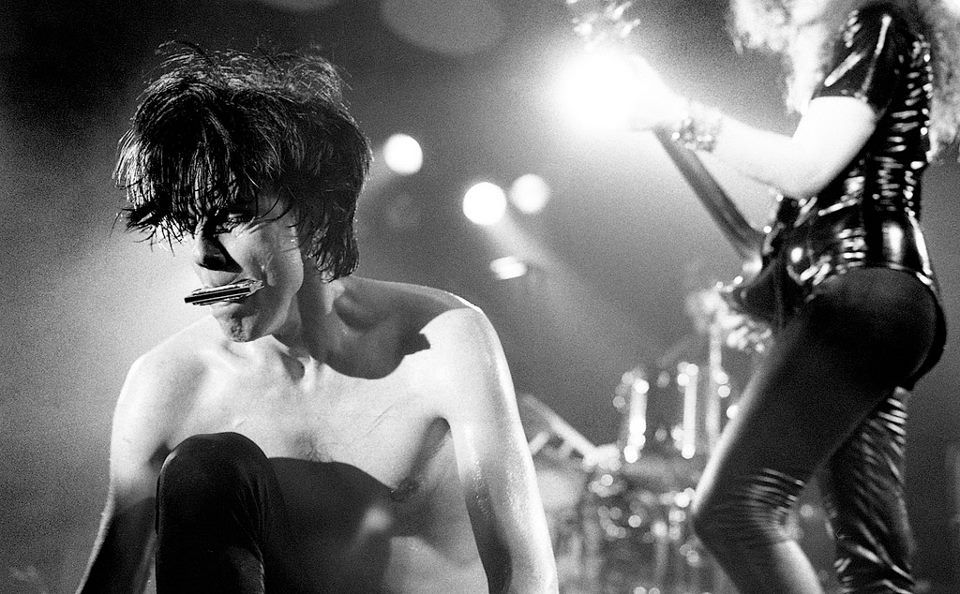 Much cooler than you.

It’s not the best book on a band I’ve ever read, but it’s not the worst. That’s perhaps what frustrates me most about Journey to the Centre of The Cramps: it neither shits nor gets off the pot. It’s a credible recounting of their journey, and I did learn a lot about the continual label fuckery they endured – who knew that The Police were involved – but mostly it seems distressingly anodyne.

Porter’s writing throughout is mostly serviceable. There’s a list of references at the end of the book, but quotations aren’t footnoted, so it’s difficult to figure where various pronouncements would fit, chronologically speaking. Some are pretty easy to figure – there’s bitchier quotes about Bryan Gregory’s departure from the group that would have to be fairly close to the event – but I felt that for the most part, the quotations were adrift in a sort of continual present rather than being connected to the events as they happened. This is a shame, as we all know that reflection offers very different reactions to contemporaneous quotation.

The author is a little in love with his own turn of phrase, I suspect, and there’s the occasional sense of an axe to grind, particularly where the UK press (and other UK bands) are concerned. I’m no defender of either of those things, really, but it just seems a bit childish to want to hang shit on certain outlets through the text, particularly when he’s trying to communicate Lux and Ivy’s idea that anyone could do what they do, could be in a band and give shit a go in the manner best befitting their personal preferences. It jars, really, because in a biography I want to feel the subjects speak – not the author.

A look through Porter’s writing history shows that he’s someone who writes music books, more or less. Mostly, they’re about the same kind of thing: Blondie, the New York Dolls and glam. There’s some newer stuff – tomes on The Darkness and The White Stripes – but it seems the Cramps’ era is the one he’s interested. Which is kind of cool, but seeing that he’s written a bunch of similar books on similarly-placed bands, I can’t help but wonder how much of the observations about styles and times found in this book are echoed elsewhere. I guess I’m trying to articulate my biggest problem with this text: given the lurid dayglo vampirism of its subject, it feels a bit… phoned in?

The Cramps are deserving of a great biography. I suspect, though, that this one will be what we’re stuck with. Since Lux’s death, Ivy has kept the band’s fans at a remove, and I suspect that revisiting and retelling their story to another author would prove too much of a reminder of what’s lost. I could always be wrong, and she could be writing a tell-all pasties-and-flickknives tale. If she is, I’ll be first in line, because such a great band deserves a much better memorial than this.

For such a full-blooded bunch of freaks, a serviceable text isn’t nearly a good enough testament, no matter how well-intentioned.