Thanks to a generous (and conference-attending) friend, I spent last night at the Belvoir St Theatre watching the State Theatre Company of SA’s production of Mr. Burns, a Post-Electric Play, an off-Broadway musical (truly) by Anne Washburn. I’m a fan of The Simpsons and I like dark comedy (as this was billed) so I was keen to see how it would all fit together.

It would appear Lisa was way ahead of me. 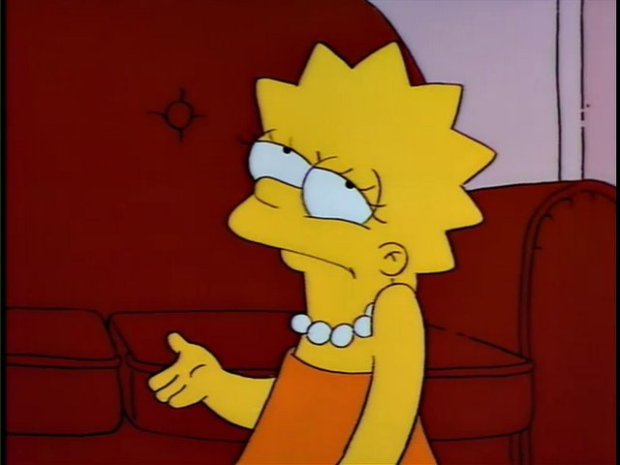 Neither highs nor lows.

Look, I can’t fault the energy of the performers. The cast were full of energy, and committed to the roles – you have to be when singing revamped adverts and Gaga songs are part of your gig – but something about the play as a whole didn’t really sit well with me. The cast give it a red-hot go – particularly Mitchell Butel, whose bodysuit GrinchBurns sleazy camp must be seen to be believed – but I couldn’t help but feel there was something else missing.

I guess that’s the problem. I’m the target audience for this thing, and while I laughed at some lines, I was a bit underwhelmed by it. It wasn’t surprising that interval saw maybe one or two dozen walkouts – older theatregoers who perhaps weren’t big Simpsons aficionados just weren’t into it. There’s an element of the gang show, of the low-budget, thrown-together school play to the play-within-a-play aspect of the story, which fits the work – but perhaps it’s a little hard to stomach when you’ve paid the thick end of $70 for the privilege. Yeah, it costs a lot of money to look this cheap, as Dolly Parton famously remarked – but it doesn’t mean the end result is necessarily going to satisfy.

The setup is simple. We’re after the apocalypse – something to do with reactor failures throughout the US? (It’s never entirely clear.) – and clusters of people gather together to try and survive. And of course, stories are told. In this case, it’s the ‘Cape Feare’ episode, more or less.

What better stories to spread than those in The Simpsons, perhaps the biggest contributor to popular culture of recent times? (Now bigger than Shakespeare, I’ve heard it said at times.) Around bin fires, on fucked-up couches, people reconstruct episodes, from faltering memory. You’ve done it, right? Right. It’s a bonding experience and a leveller, something accessible to all.

(And equally infuriating when the quotes are wrong. I know it’s undoubtedly intentional, but I had eyeball twitching all the way through.)

Fast forward a couple of years, and we’ve entered a period where our original group of survivors are bolstered with more additions, and they’re part of the Simpsons circuit, where extended takes on adverts and full episodes of the show are performed (with rudimentary costuming) to audiences in settlements across the blasted hellscape. Theatrical factions battle for the best show, with blood spilled over makeshift stages.

The final part of the show – the second half – is set 75 years in the future, where the plays have morphed into something entirely different. The story has mutated, so it’s no longer about Sideshow Bob chasing Bart on a houseboat – it’s a morality play, a sort of medieval riff on the original, with Eminem lyrics voiced by Bart as Mr Burns, the personification of love/hate evil, tries to defeat the boy. The setting is ascetic, the costumes renaissance; through the years, the wit of the original has been pared back to provide moral instruction for those left to watch it.

The truth of my relation with this work is that I liked the ideas in it more than the execution. I don’t think that’s a problem of the cast or of the creative team bringing it to the stage in Sydney – the set was clever, the choreography (and camp overdrive) was enjoyable, the costumes (particularly in the second half) were subtle, and the sense of banding together palpable – but more a flaw in the work itself. It ostensibly examines how stories mutate over time, a dramatic version of the transformation Gavin Bryars’ The Sinking of the Titanic makes for sound. And I get that we’re dealing with a current-era almost-extinction event, so it makes sense to have included cultural touchstones from 2014, when the play was written, it already seems dated. 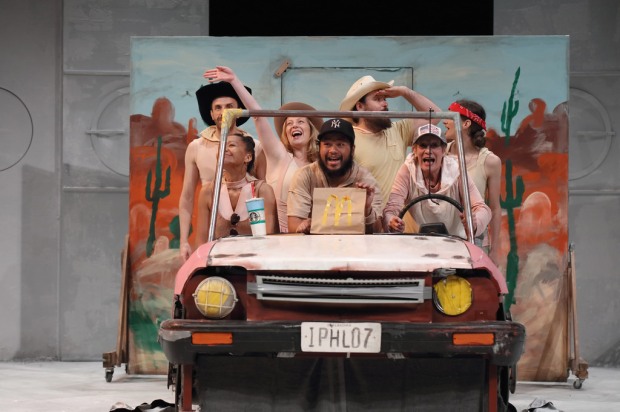 The fact that the show was not the first choice of the author for inclusion – she considered Friends, Cheers, and M*A*S*H before settling for Springfield – makes me wonder how wedded to the show the play is. A more cynical side of me wonders if it was a way to generate interest (survivors do Simpsons!) with more pull than other combinations. (Would you pay to see Everyman starring Ross from Friends? Didn’t think so.)

Still, the original show has referenced this show, if not this production, so I could be a bit Granpa about the whole thing. If you’re a fan of the show, you should perhaps check it out, as the cast are giving it all they’ve got.

It’s just a shame it wasn’t enough for me.