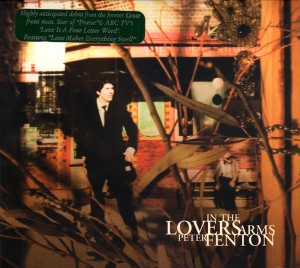 There’s two things to note about this return, too. Firstly, it’s a concept album. Secondly, it’s a product that makes the waiting worthwhile. It’s got an upbeat feel to it that rings of the kitchen sink; there’s more of a feeling of contentedness with domesticity here than has been heard from the singer before.

A little more on the concept, however. The Lovers Arms of the title is conceived, says Fenton, as a sort of John Edwards meets Edward Hopper place where all those who have passed on can gather. There’s no building of walls across stages here, and no sort of sense of contrivance; rather, the idea allows the musician to focus on the sort of subjects that are important to him; melancholy and history – one’s place in the scheme of things. The idea of inter-generational conversation, of growth, of speculation on what has and what might have been is key here.

The production of the disc – a duty that’s shared between Fenton and the everywhere-at-once Wayne Connolly is solid and rich. There’s plenty of warmth to the way the music’s captured, and it seems that the musos backing the singer – Registered Nurse’s Richard Andrew, The Devoted Few’s Ben Fletcher and David Lane, amongst others – have accurately managed to convey the singer’s idiosyncratic, almost oceanic songwriting predilections. The musical hallmarks that made some Crow compositions so epic – the spacious strum, the bassline juddering around the room on a pair of inflexible legs – remain intact here. But somehow, rather than becoming all-encroaching, smothering, they’re placed behind the vocals, rather than atop them. On the album, the vocal lines aren’t that hidden – indeed, the singing is clearer than at any time in Fenton’s recording history. The examination of the sometimes sadder points of life is unhindered and unobscured, and it allows you to realise something that’s listeners familiar only with Crow have perhaps never considered: Peter Fenton is, it seems, happy.

The difference between Fenton’s work now and, say, that of Tim Rogers is that while the listener suspects that Fenton is happy, they’re not entirely certain, whereas Rogers tends to whack his fans over the head with it. It’s a difference that’s important. Here, you’ll find no in-sleeve pictures of bouncing babes or kissing partners. There’s a smiling singer, sure, but the album’s artwork is held in the smeared lens of memory. It’s as if the pictured artist has already passed on to The Lovers Arms, to that place where the dead go and exist in memory. It’s a fitting image for an album that’s so suffused in nostalgia. Like warm sunlight through the slits of suburban blinds in the late afternoon, there’s something familiar and comforting here, something natural and true.

That’s not to say that it’s all completely unobscured diary-scrawl, either. There’s a feeling that some of the persona of the cabaret-slick frontman that the singer adopted for his turns with The Slinky Moonlight Revue, his backing band for sets of cover versions. The concept of a step-right-up vaudevillian singer, cane in hand, is brought front and centre on the disc’s second track, the nudge-nudge titled ‘Love Makes Everything Swell’. With a horn-driven gear-change, the song soars about the effects of love; the light-heartedness clad in vocals speaking of a sort of music-hall encouragement.

But, of course, it wouldn’t be a Fenton tune if it was all lightness and confection; there’s a sawing string backing to the chorus which gives a little element of pall (offsetting the joyousness of the track’s trumpet accompaniment wonderfully) to the proceedings, giving extra gravitas to the chorus where the vocals warn, repeatedly, that

It’s a combination that is at once familiar and unsettling; a reminder of the shadows that follow life’s joys.

The afternoon-light feeling continues on tracks like the wistful ‘In The Lovers Arms’. Light drumming and seductive slide outline a song that’s full of quiet musing on survival, on the way the living carry with them elements of those who’ve gone before. It’s beautiful, and even manages to fit the word “curmudgeonly” into a line without it sounding like too-clever shoehorning.

While it’s certain that Fenton’s not particularly keen to hear the phrase “dark” applied to his music any more – it was a staple of just about every Crow review written, along with “angular” – there’s more than a sprinkling of the shadier side of life found on ‘Suspicion’, labelled by the performer as one of the most paranoid tunes he’s laid down, is a low-key, effected-vocal description of betrayed love. The strain is palpable in the voice; it’s a great fit to the waves of sound that wash up against Richard Andrew’s feather-light drumming. Almost Radioheadlike guitars play in an instrumental interlude that’s filled with whispered speech that’s not quite intelligible, layering tension upon tension in a way that harks back to the most self-engrossed, worried work of Crow. The ability to encapsulate clock-watching worry with effusive instrumentation is still in evidence; only this time it comes in the form of the occasional song, not the whole album.

Politics is also key to this disc. ‘Z-Graders’ is a song that brings to mind the works of The Go-Betweens. But interspersed with its rollicking rhythms is a thumbnail sketch of a particular type of person’s reaction to the Tampa dilemma. It’s upbeat, but with a punch behind the tune; something to prick consciences while moving feet.

The other tune on the album with more overt political leanings is ‘Sway’, a tune that seemingly asks for an explanation, generations on, for prevailing attitudes:

All the while, the question is couched in a gorgeously South American-styled musical setting, sounding like a laid back Antonio Carlos Jobim tune. It’s sinuous and provocative, and indicative of Fenton’s new approach; softly, softly. Walls of distortion aren’t the weapon of choice any more – many of the songs here were written on piano, and the difference in genesis shows.

The other two standout tracks – though most of the album is seldom other than excellent – are ‘Remember Your Way Home’ and ‘Where Does The City Sleep’. The former is a tear-in-your-beer farewell song that, with flugelhorn and trumpet punctuation, sweetly brings an end to the album proper, while the latter could be the finest song about city life that the songwriter’s produced to date. Junkies and paddy-wagon miscreants populate the tune, heartfelt cries of “Hallelujah” signposting the lyrics’ rhetorical questioning. Ending on an image of Luna Park as keeper of the metropolis’s beating heart, Fenton encapsulates the juddering, unexpectedly quick process of living and maturation in the lines

In The Lovers Arms is a wonderfully mature work, the product of one of Australia’s most intelligent and understated songwriters. It’s an album born out of the big changes in life. And it’s an album that sees the canny wordplay and darkness-wrestling that made Crow so compelling leavened with the simple exuberance of living and loving this world, no matter how fucked-up it may be. With its red-wine-and-dapper-chap aesthetic, it’s probably a little too cabaret, a little too downshifted for some listeners, but that’s fine – it means there’s more room in the mythical hotel’s front bar for those of us who appreciate the newly-minted perspective that’s backing the fluid moves of that dapper bloke on stage.

I really liked pushing the word limits when I got on a roll. Obviously, I could use more editing. The record, however, remains wonderful.