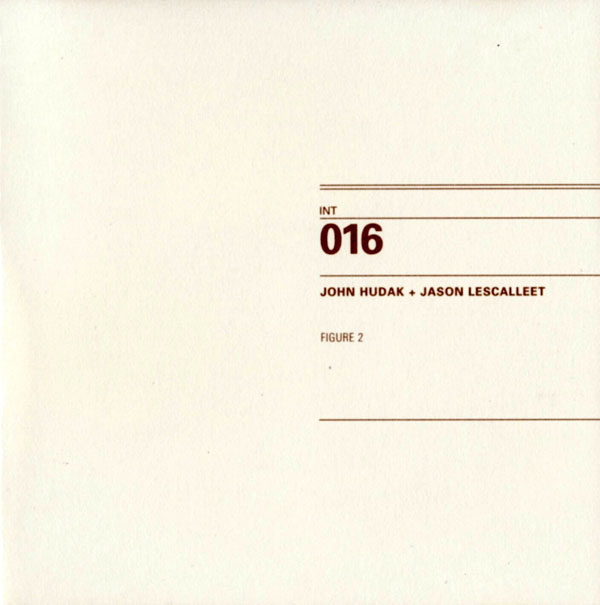 Take one NY-based sound artist (Hudak) and one New England-based composer (Lescalleet). Give them a load of recording equipment, an audience and place the whole shebang inside a Massachusetts chapel in the middle of a snowstorm. Sounds like a recipe for disaster, right? Thankfully, such preparations have resulted in a recording of such incredible beauty that it will make you believe that there are benevolent gods watching over those who explore what constitutes music.

Figure 2 is an album that could veer towards self-indulgence quite easily, but the duo’s subtle sonic ministrations move the composition more towards listener involvement than you’d expect. It’s ambient music, sure, but without the glacial detachment that marks some of the genre’s output. No Eno-esque clinical treatments are found on this disc — the music is organic, and communicates a sense of growth, of journey. The sounds of the storm and the audience are recorded and re-recorded, mixed with drones, white-noise and almost-hidden scratchings, and are then recorded again to produce something that’s more than the sum of its parts. Cheap recording equipment and the sampled sounds of not-quite-silence are layered with coughs and creaks to create a soundscape that moves from an identifiable, room full of punters to something a lot darker.

‘Figure 2.01’ opens with a soothing, thrumming bass sound, reminiscent of a jet’s engines or an ocean-liner’s screw, which lulls the listener into a comfortable fuzziness. This soft-focus feel gives the sensation of being inside a huge, throbbing machine, traveling. Minutes pass and the sound of scratching appears, marking the first appearance in the mix of something uncomfortable; of insects, or of small, nervous machines. The relaxed feeling that’s been established is never unseated, but for the remainder of the album you’re made aware of something terrible, lurking just out of sight. The tonal color darkens right up until the disc’s end, and while chaos never does break loose, the threat of its appearance is enough to unsettle.

What really amazes about this album is the fact that it’s a live recording, with no post-performance doctoring. The pieces unfolded by chance, though they’re as satisfying as the most perfectly-planned studio work. Though there are no classic Marshall-stack or Live At Budokan points of reference here, Figure 2 is certainly more involving than most live discs you’ll ever hear. Do yourself a favor: find some headphones, a free evening, and a copy of this CD. You’ll be transported somewhere fragile and unsettling, and you’ll be glad to go.

First published on Splendidezine in September 2001.

A couple of thoughts as I’m posting this: I still love this album, and I think this review was one of the first I had positive feedback about – which is kind of funny when I think of how my writing has changed over the years. The record label it came out on, Intransitive, fast became one of my favourite sources of batshit-insane-and-great albums, and the chap behind the roster is one of life (and noise music’s) Good Guys. This remains one of the most affecting albums I own, and though I haven’t listened to it as much of late as I probably should, I’m very glad I own a copy. It’s up there with the first Coelacanth disc in terms of music I love yet can’t describe adequately. You just have to hear it.