So I’m writing a non-music, non-books, non-gaming post. Shocking, right? Right. But it’s because of the date, as today is the 15th anniversary of the first GBlogs blogmeet, and I was there. See?

So I thought I’d write a little bit about blogging, which is something I never really thought would become as ubiquitous as it has. But then again, I always thought we’d get online using 33.6k modems, so obviously I know fuck-all about technological trends. END_OF_DOCUMENT_TOKEN_TO_BE_REPLACED 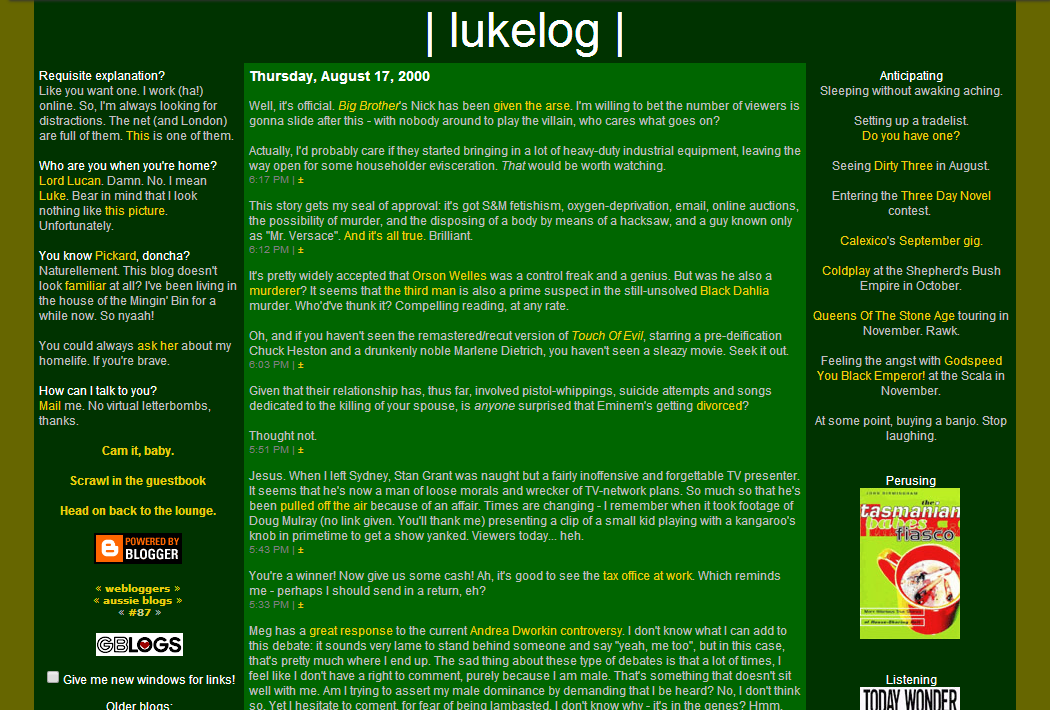 Coded with me own hands, that.

Well, not quite. That’s the date I first registered this domain, many moons ago while living in London. There was a whole other weblog here for a long time – called |lukelog| – which was my first introduction to the public eye, I suppose. It didn’t always look as it does on the left, mind.

I set it up after seeing my flatmate Meg’s blog, and it pretty much consumed me. I wrote a lot, much of it terrible, and much of it presenting a pretty ropey portrait of my mental health and self-confidence levels than I ever would have thought at the time. It’s probably a hint as to why the archives for |lukelog| aren’t to be found here: it’s a little like reading diaries from your teens. It all seems a bit facile and innocent now, somehow.

It was fun, don’t get me wrong: being the kind of odd addition to the GBlogs stable, knowing some people who’ve since gone on to work in Important Web Things And Organisations. Hell, I was even nominated for the best European weblog in the inaugural Bloggies! (I didn’t win, though I should add it’s an honour just have been nominated and gee, shucks, I don’t know what to say.)

But at the same time, I was sort of beholden to the thing. I continually picked at it. And I ended up hating the sound of my own (typed) voice, as well as feeling weird about the whole concept. (Though I must admit, it was particularly great when people I’d never really met bought me replacement albums after I’d had my bag ransacked by some fuckhead at the Green Park Hotel on a trip back to Sydney.)

So I stopped. And now I’ve started again, though for slightly different reasons. It took a couple of false starts to arrive where we are, and I’m still unconvinced it’s a wholly worthwhile idea, but as long as I have reviews to add (or to save from the digital dustbin) I suspect I’ll keep going.