Use Your Words: A Myth-Busting, No-Fear Approach to Writing by Catherine Deveny
My rating: 5 of 5 stars

Catherine Deveny is a writer, comic and general shit-stirrer. She’s a dyslexic atheist who sees CAPS LOCK as COCK SLAP and is by her own admission pretty lazy. She’s also authored a bunch of books, shows and columns, and manages to get shit done with alarming regularity. Use Your Words is an excellent distillation of her work ethic, and a rarity in the world of writing-help books: something that’s useful without being bone dry or coming across as some kind of pan-pipe backed recruitment ad for a writing cult.

Big admission first: I bought this book from the author at one of her Gunnas Masterclasses. That’s where you get to eat nice food, hear some of the stuff that’s in here, write a bit and get more jokes and profanity than you normally would in other artist workshops.

It’s now some weeks later and I’ve just finished the book. I hoovered it up. It’s broken into four sections, includes a FAQ and a challenge, and even closes with the exhortation by the author that you don’t have to listen to any of what’s written if you don’t really want to.

The book deals with preconceptions pretty early on: procrastination, effort, and whether you’re really someone who wants to write at all. This last is very important, as there’s lots of people agonising with the idea that they should write, and beating themselves up for not doing so. It’s something not often addressed in creative advice books: the fact that hey, maybe you don’t need to do this thing. Maybe you’d be happier doing something else?

For some people, being told it’s ok to go do something else to do with books – other than writing them – may be worth the price alone. I certainly found some of the writing in here made me question or reevaluate my motivations.

The rest of the book gives principles which will help with writing, tools to keep in your back pocket, and advice on overcoming obstacles. It’s all simply written, funny, and useful. You’ll probably end up taking notes; I did, because there’s a lot of stuff here that rings true.

Yes, there’s some justification to other reviewers’ suggestions that the book is repetitive. It is, occasionally. But that’s kind of the point: the repetition is to bed down the key ideas. It’s so your brain – brains are fairly dumb, regardless of what we might think – can be fooled by repetition into, if not believing something, into tolerating it until we believe it.

Over. Under. Through.
Motivation follows action.
Inspiration is for amateurs.

These are all simple, almost trite nuggets, but Deveny provides enough background to show that they’re applicable. She’s willing to make herself look silly to get the point across, and herein lies part of the book’s appeal: this isn’t some Strunk & White fetishist tome. It’s written by someone who recognises that you’d rather surf eBay or wank or rearrange the vase cupboard than write. It’s written by someone who has the same struggles you do.

That’s the real gold of the book. I’m a writer and editor by trade: I know a bunch of the tools that are provided. But where this book excels is in reminding you that writing is basically shit. It’s awful. It’s not fun. It’s the cooking before you get to eat the meal. It’s incredibly liberating to read that no, writing isn’t angelic trumpets and perfectly typewritten pages in a neat box on a leather desk: it’s constipation of the soul and it can be obnoxious as fuck to get through.

At its heart, this is a book that speaks to people who need to write. Who don’t feel right if they don’t. It skewers the ideas of what you’re meant to do and gives you tools for surviving what you want to do, even when you don’t want to do it. For me, it’s up there with Stephen King’s On Writing in terms of being a book that makes the reader want to write. The difference is that Use Your Words is more practically useful. It’s a quick read by someone who knows how shit it can be, and who can help you get through it. 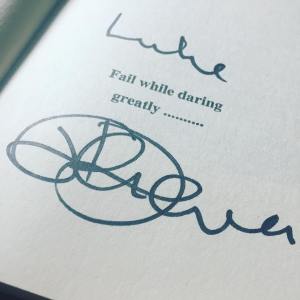 It’s changed my approach to writing. It could change yours. Thanks, Dev.